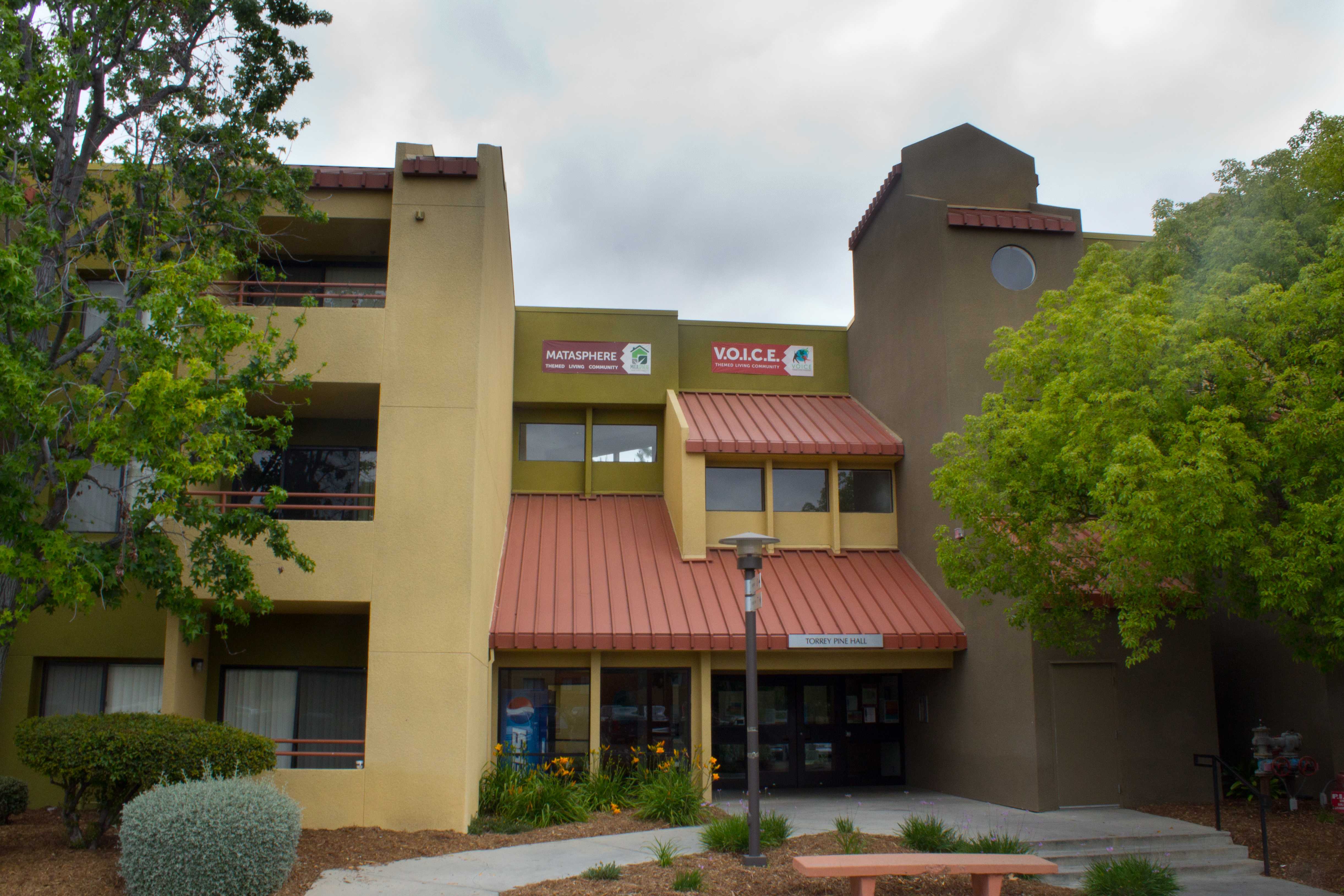 The Matasphere, or building 7, features few distinguishing features from the outside. Allen Natian / Contributor

Sustainability has become a major cause on CSUN’s campus, and the University Park Apartments have been keeping up with the initiative by creating the Matasphere. Located on the first floor of Torrey Pine Hall (also known as building 7), the Matasphere hosts many features such as helpful tips for conserving energy, field trips and events for its residents.

The Matasphere made its debut in the fall 2014 semester in an already functioning dorm building and does not have any major requirements to live there. It is one of the many themed-living communities in the UPA along with MATA+MORE, Living Above the Influence and more. Starting with only the first floor, UPA wanted to revamp the living quarters and challenge its residents to be more aware of their carbon footprint.

“Currently in the rooms themselves, unlike some of the other dorms that we have, we have tons of notifications and information displayed all throughout the apartment talking about the different ways that they can conserve energy and water and lessen their carbon footprint,” Liberty Freeman, office manager of residential life and facilitator for the Matasphere student living community, said.

These notifications are usually placed near utilities residents use most like the light switch or kitchen/bathroom faucets, reminding them to turn things off before leaving the room, for example.

They are also equipped with shower heads that give you the option to lower the water pressure to conserve energy.

Although the cost of living in the Matasphere is the same as living in the other apartments in the UPA, according to Freeman, residents are still given a very specific experience with certain field trips and events.

“This year we taught our students about commuting,” Freeman said. “We got all of our students cab cards and they had full day passes on there. I brought them all the way to Dodger Stadium from campus and showed them how to use the red line, orange line and the bus and train systems so they can travel all over L.A. In return, they got a great game out of it.”

Other events hosted by the Matasphere are more inclusive, like their annual Matabattle competition. This competition urges each building to recycle, conserve energy and water. Whatever building does the most receives a special plaque and bragging rights.

Freshman CTVA major Chase Smith is a resident in the Matasphere and chose to live there after taking a course in high school about environmental science. Smith usually abides by the notifications in the dorm but admits that he and roommates may easily use the most energy on the floor.

“[The video game consoles] are always on,” Smith said while playing the console with a friend. “If I’m not playing, my roommates are. The television and the living room definitely accumulate the most energy.”

Since the Matasphere’s notifications can only remind the residents to conserve, the UPA has to trust in them that they will lessen their carbon footprint on their own. Freeman suggests that the best way is through education.

“We’re working at collaborating with the local area trash waste disposal so that our students can see what actually happens to our trash,” Freeman said. “We’re providing the students with an educational platform to understand where they are in relation to the cause and effect. Our students are recycling on their own and even having movie parties with the funds they’ve accumulated.”

The UPA is still coming up with new ways to improve the themed living community. Freeman said they will start by collecting feedback from the students on what they can do better.

“Obviously, it is student interest that is very important and in order to create energy conservation there has to be a will and a want,” Freeman said. “We want to know where they see it heading towards, what stimulated them this year that they would like to continue as well as what they would like to see.”

Smith echoes those sentiments- requesting that whoever is involved with coordinating future improvements with the Matasphere should be passionate about energy conservation.

“Our old [residential advisor] was all about sustainability so that really helped,” Smith said. “[The residents] don’t boast about how we are all environmentally-friendly but at one point, all of my floor mates have become great friends. The Matasphere brought [like-minded] people together.”

“You don’t have to sacrifice the way you live on a daily basis to just be more energy conscious,” Freeman said. “In fact, it’s a great community builder to live on this floor because it gives everybody an opportunity to get together. In the discussing of where [residents] want to see it heading, they can come up with these great programs that can affect the community in general.”