Water usage at CSUN comes into question as drought persists 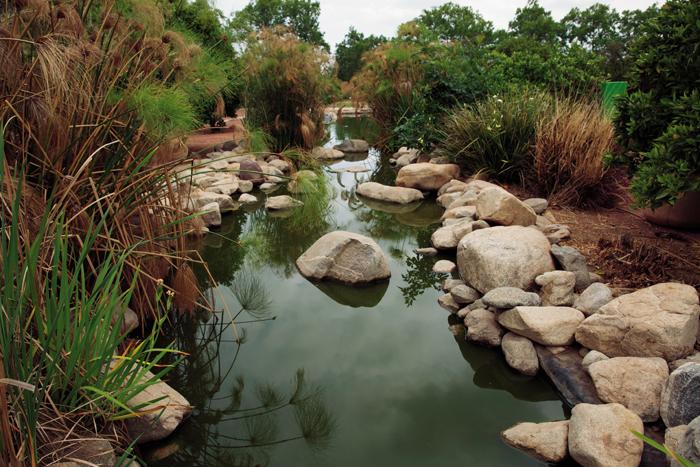 With a student population numbering this semester at over 36,000 students, the very notion of water conservation on campus may seem far-fetched — even impossible.

But a series of present and future sustainability measures could put CSUN ahead of the curve in water conservation.

Experts say California’s drought is the result of lower-than-average snowpack and rainfall, particularly in the foothills of the Sierra Nevadas, where snowpack has been the lowest since 1950.

Snowpack levels in the Sierra Nevadas are only a fraction of what they have been in years past. This winter, almost no snow fell there, compared to an average of five feet.

“Most people don’t know that we rely so much on snowcaps,” said Marina Slijepcevic, a CSUN sophomore geology major.

In years past, it was common to see the region packed in snow as late as May or June. Now, photographs of the region show, in stark contrast, foothills devoid of any snow, and only pockets of snow at that.

“You’ve also got increased population, increased demands on water, climate change,” said Chris Bonds, senior engineering geologist with the California Department of Water Resources and CSUN alumnus, during a presentation at the university on April 17 on the California drought. “You look at the historic record and you’ve got wet and dry cycles. Sometimes you’ve got numerous wet years in a row, and sometimes you’ve got a lot dry years in a row. It’s part of the natural cycle.”

Reservoirs and dams that were once filled to the brim are at levels so low that their lake beds are exposed.

“We’ve had droughts in the past,” Bonds said. “This particular drought cycle that we’re in is definitely setting some records.”

Between October 2011 and March 2014, California experienced its driest 30 months since recordkeeping began in 1895. It is the fourth driest season on record between 1906 and 2014, Bonds said.

On April 1, in an unprecedented move in response to the ongoing drought, California Gov. Jerry Brown issued an executive order calling on the entire state to cut water use by 23 percent by the year 2020.

In its draft 2014 CSU Sustainability Report, the California State University Chancellor’s Office issued a directive calling for all of its 23 campuses to reduce water use by 10 percent by 2016, and 20 percent by 2020, from a baseline water usage average of 243.1 million gallons. The baseline average uses figures taken from fiscal year 2013/2014 average water usage.

The executive order by the governor — to be adopted by the CSUs — would see the university system further reduce water usage by as much as 25 percent below the average baseline.

“Basically, we have to meet all of these goals,” said Austin Eriksson, CSUN Sustainability Program manager.

The most recent total figures of water use saw the school using about 239 million gallons of water in fiscal year 2013/2014, or one percent below the Chancellor’s Office Baseline of 243.1 million gallons.

In fiscal year 2015/2016, the school is expected to use about 186.2 million gallons of water, or about 23 percent below the Chancellor’s Office Baseline, which meets the 2018 goal.

“Our goal was to get ahead of the water challenge,” said Jason R. Wang, senior director of CSUN Physical Plant Management. “We use quite a bit of water. A lot of it ends up going to irrigation. Our biggest challenge was how to change our landscaping to be more drought-tolerant in areas that don’t need grass. Are there any [areas] out there that really are just grass for the sake of being grass? We are progressively trying to remove those.”

CSUN measures roughly 350 acres, Wang said, with about a quarter of it landscaped, including athletic fields, fields used by academic programs and the Oviatt Library lawn.

“With the new executive order, we’ll be a little more aggressive with our turf removal strategies,” Eriksson said.

The CSUN campus has several initiatives in place, through its Institute for Sustainability, to save water and to educate students and the general public on the importance of water conservation.

The sustainability initiatives, however, are not in direct response to the drought, but have been in place for the last five or six years. They are a part of the university’s efforts to conserve energy resources and promote greener alternatives in a variety of campus sectors, including transportation, energy, irrigation and landscaping.

“It’s ongoing, but it’s definitely been more aggressive because of the drought and the mandate from the chancellor’s office to reduce our water usage,” said Sarah Johnson, Institute for Sustainability program coordinator of Brown’s mandate. “We work very closely with facilities on their projects.”

“We literally turned the water off for a year, and they’re fine,” Eriksson said of the native plants on campus.

The university also has plans to install smart sprinklers connected to a campus weather station, which would activate or deactivate the system based on weather forecasts. A new system would also detect broken sprinkler heads or malfunctioning sprinklers.

“Sometimes, I do see the sprinklers going off,” said Cate French, a CSUN senior geology major. “It’s gotten a lot better in the past couple of years, where I go out at 9 o’clock at night and I see the sprinklers on, and I’m, like, ‘Yes! They’re going now, not at 9 a.m.’”

Tiered rebates from the Los Angeles Department of Water and Power’s Water Conservation Rebate Program has allowed CSUN to fund most of its drought tolerant landscaping projects, Eriksson said. The school can receive upwards of $3 per square foot for replacing anywhere between 250 and 10,000 square feet of turf with water-wise landscaping features.

One such project is taking place around Redwood Hall, where the school received $119,434, Eriksson said.

“It costed us money to do this project,” Eriksson said. “That money is paying for that project, and we’re also taking whatever money is left over … to really fund the next series of projects.”

The efforts by CSUN are not unlike other conservations effort taking place at other CSU campuses across the state.

From San Diego to Humboldt, every university is undertaking unique projects and research aimed at learning more about the environment, conserving water and maintaining and promoting sustainability.

At Cal State Chico, for example, campus vehicles are washed only at car washes that use recycled water.

Faculty research at Cal State Sonoma is reconstructing climate history over the last 10,000 years and measuring human impacts to the natural environment. The facilities department at Cal Poly San Luis Obispo has installed a 260,000-gallon rainwater catchment and storage system.

“It surprised me. I didn’t think it was that bad,” said Slijepcevic, after attending Bonds’ talk. “I thought maybe it was dramatized a little bit. I really don’t feel the impact. But seeing that — the pictures — really changed how I thought about it.”

For more information on projects being undertaken by CSUN’s Facilities department, visit www.csun.edu/facilities.

For more information on projects, research and activities by CSUN’s Institute for Sustainability, visit www.csun.edu/sustainability.