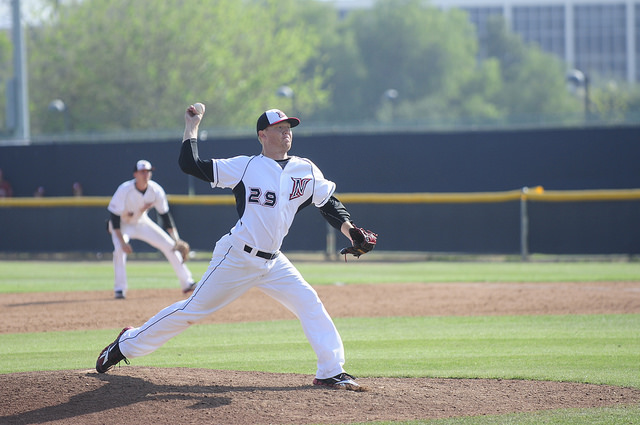 Ryan also added seven strikeouts and two walks to his totals in his first career win. He retired the first nine batters he faced, but eventually gave up his first hit of the game in the top of the 4th when he allowed a solo home run. Ryan managed to work out of the jam in the fifth inning after walking a batter with one out. Ryan then surrendered a single to the next batter, but managed to work out of the inning with a fly out and a groundout.

The CSUN offense jumped out to an early 2-0 lead in the bottom of the first thanks to a two-run single by short stop Yusuke Akitoshi to score center fielder Justin Toerner and second baseman Ryan Raslowsky.

The Matadors then added two more runs in the bottom of the third after catcher Dylan Alexander hit a two-run single to score Toerner and Raslowsky.

Leading 4-2 in the bottom of the eighth, CSUN was able to score two huge insurance runs, as third baseman William Colantono hit an RBI single to score Alexander and then Raslowsky hit an RBI double to score pinch hitter Nick Blaser extending the CSUN lead to 6-2.

Akitoshi, Alexander and Raslowsky combined for seven hits, five runs and five RBIs and eight of the nine CSUN batters in the lineup recorded at least one hit in the game.

Relief pitcher Conner O’Neil picked up his sixth save of the season, as the Matadors secured their second straight victory.

The Matadors return back to Big West Conference play when they host UC Riverside for the first of a three-game set starting Friday afternoon at Matador Field. First pitch between the Matadors and Highlanders is set for 3 p.m.