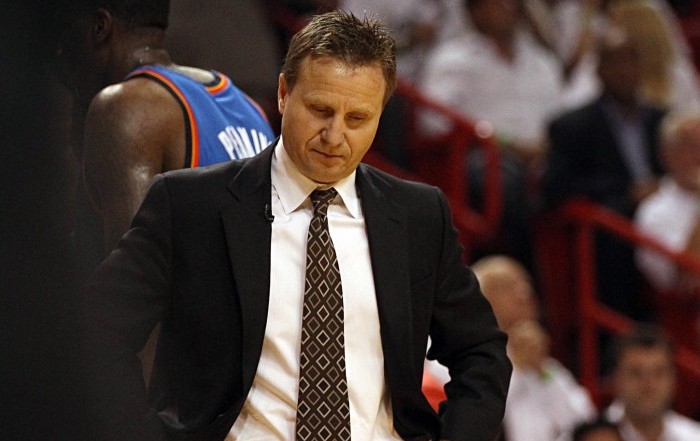 "In his time as head coach, the 2009-10 Coach of the Year winner led the Thunder to their first of five playoff berths, four Northwest division titles, three Conference Finals appearances and a NBA Finals appearance in 2012." (Pedro Portal/El Nuevo Herald/MCT)

The Oklahoma City Thunder have officially fired head coach Scott Brooks, just a week after the team missed out on the playoffs.

The decision came Wednesday afternoon where Thunder general manager Sam Presti issued a statement about the decision during a press conference.

Brooks has been the head man in Oklahoma City for seven seasons and had a fundamental role in changing the culture of the Thunder.

In his time as head coach, the 2009-10 Coach of the Year winner led the Thunder to their first of five playoff berths, four Northwest division titles, three Conference Finals appearances and a NBA Finals appearance in 2012.

Brooks garnered a lot of accolades and was wildly productive, but the lack of winning a Larry O’Brien Trophy has continued to haunt the Thunder organization, making his firing a tough, but necessary decision.

After going 45-37 this season, the Thunder missed the playoffs after the New Orleans Pelicans won their final regular season game, despite a dominating regular season campaign by Russell Westbrook.

The injury bug plagued Oklahoma City and had a major effect on their slow start to the season, but missing the playoffs was not the only factor into his firing. It just happened to be the breaking point in the organization’s decision in wanting to go in a new direction.

Western conference teams have a limited window of opportunity to capitalize on their success and the Thunder have showcased an inability to make the next leap in postseason play with Brooks running the show.

They have gone 39-34 in postseason play with a .534 playoff win percentage and consistently fell short of their title aspirations.

Also, questions about the Thunder’s offensive system and offensive sets in close fourth-quarter games, have been dominating headlines for the past five seasons.

When the Thunder superstars were both out, due to injury in the beginning of the season, the Thunder struggled to win games in Brooks system, which is heavily predicated on his usage of Kevin Durant and Westbrook.

There were various factors that most likely contributed in his firing and though Durant is feeling somber about Brooks leaving, he also supports the Thunder’s decision 100 percent.

Despite their parting, both the Thunder organization and Scott Brooks have increasingly bright futures ahead of them. The Thunder’s head coach vacancy is easily the most enticing destination for top coaching candidates and Scott Brooks is probably the best free agent coach on the market.

The speculations have already begun about where Brooks will land and teams like the Orlando Magic have been consistently mentioned as front-runner destinations for him.

Scott Brooks is highly underrated in his ability to develop young talent to be successful and this one quality can help improve a franchise. If you don’t believe so just look at players like Kevin Durant, Russell Westbrook, James Harden, Serge Ibaka, Reggie Jackson, Jeremy Lamb, Steven Adams, and Enes Kanter. He clearly has an innate ability to trigger a spark in players and getting the most out of their potential.

Though this seven-season run with the Thunder has ended, it was also his first stint as a head coach and he’s departing with an overall record of 338-207.

Whichever NBA team is lucky enough to land a coach with his accolades, player development skills and short, but outstanding pedigree, they should know their organization will be in very capable hands.