Student clubs gather in solidarity for victims of racism, terrorism in Africa 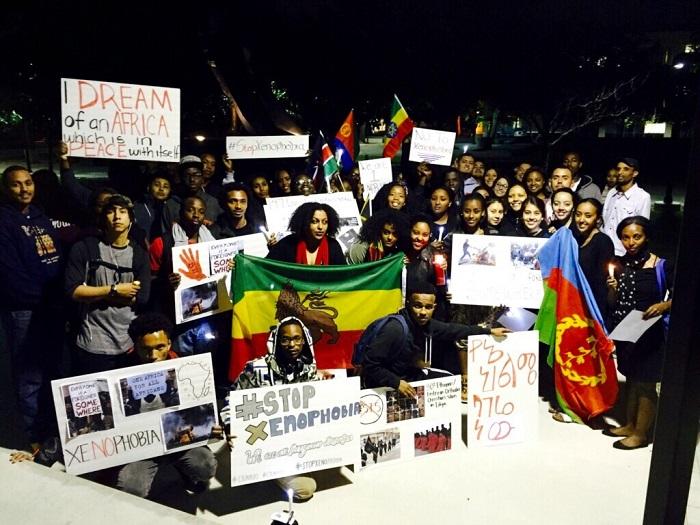 The Habesha Student Union and the African Student Organization collaborated to hold a candlelight vigil in front of the Matador Statue on Wednesday night. Photo credit: Nicolette Hinojos

Paying tribute to those who lost their lives in Kenya, Libya and South Africa, the Habesha Student Union and the African Student Organization collaborated to hold a vigil at CSUN Wednesday night.

CSUN students gathered at the Matador statue with posters that said “Pray4Kenya,” “Stop Killing My People” and “Stop Xenophobia,” and they waved the flags of the three aforementioned countries.

Members of both organizations spoke out about the killings that occurred and offered their support for the victims and those who still suffer in those countries.

“As Africans both here and over there, we need to be united,” said senior health administration major Felicity Kagiri.

Kagiri, who is from Kenya, informed everyone about the 147 students killed in Kenya by Islamic extremists and mentioned that this has not been the first killing of its kind.

Other attacks include one from last year where a bus in Kenya was ambushed by terrorists and 28 people were killed.

The other two speakers told the crowd about how foreigners in South Africa have been killed. Some believe that those who migrate to South Africa are taking the jobs of those who are already citizens.

The education chair of HSU and senior psychology major Eden Asfaw said the third event that on the 19th in Libya where ISIS released footage of the executions of a large number of Ethiopian Christians.

“We have a lot of African students here and a lot of us are from Africa or have family there,” Binyam said, “I have family in South Africa and Kenya.

Both organizations stressed the fact that although people in the United States are not anywhere near what has happened, people need to come together in support to stop the killings and the hate.

“We need to raise awareness because most people don’t even know what’s going on,” said Chizitere Nnadi, senior finance major and president of ASO. “We are one Africa.”