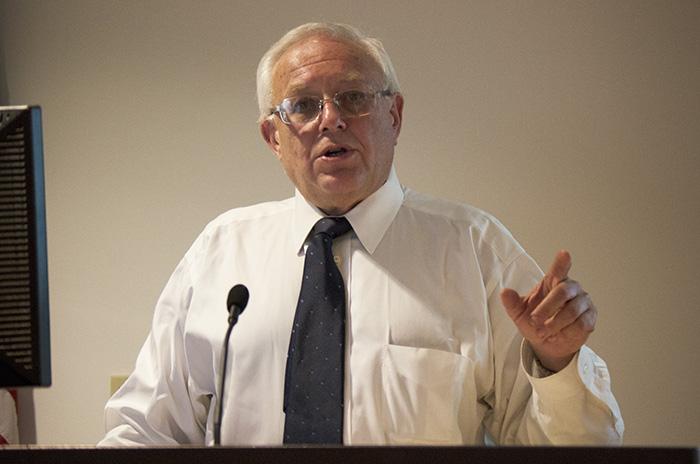 Boris Gorbis, presents "The Many Fountains of the Russian Language," and the role of Russian Language at the Modern Russian Day cultural event presented by the Russian Studies department, April 21, at the Oviatt Library Presentation Room. (Matthew Delgado / Staff Photographer)

Students vocalized their opinions and showcased their political passion about the relationship between the United States and Russia at Modern Russian Day in the Oviatt Library on April 21.

Professor Dina Mokhnatkin of the Liberal Studies Program of the Humanities College organized and hosted the event to demonstrate the relations between CSUN and Russia and American culture. There were four speakers who spoke about different aspects of these affairs that included business, law, art, and culture.

The American-Russian business council member and publisher of 21 year-old Fact Magazine, Alex Durmashkin covered the growing American businesses in Russia and Russian businesses growing in America. Toward the end of Durmashkin’s presentation, in which he talked about the complications between Russia, Ukraine, and its lowest financial state, students were asked if they had any questions for Durmashkin.

“Don’t you think it’s a little bit misleading to tell your opinions rather than facts?” Durmashkin was asked by one student. “Where is the evidence to something like this?” She said Durmashkin’s presentation felt like he was making accusations like the American government.

“All the information given is more subjective than objective,” Durmashkin said, pausing before giving his response. “In our country, we believe that the information provided by our sources is right but its angled information of course.” He said he presented his point of view because he supports what the American government does and takes community into consideration when developing an opinion.

He concluded saying the relationship between Russia and the United States is at its lowest point right now but he remains optimistic to what the future holds between the two countries.

Attorney Boris Gorbis followed Durmashkin. He went into great detail about the differences in law and government between America and Russia. Then modern Russian art expert, Dr. Mark Konecny, displayed some of the Russian influence in American arts which included film, dance, paintings, and history. Specific art pieces were shown by Russian artists and how these artists had difficulty in displaying their art around the world because of unsettled political disputes between countries.

Although their artwork was not allowed to be shown, he said they still made a great cultural impact in the arts.

Then a segment titled “Into Russia and Back” shared stories of alumni from the STARTALK Russian Language and Culture Immersion Program where people shared their experiences learning about and going to Russia. Despite all of the differences between the countries, it was strongly recommended by the presenters that students learn about different cultures.

Although there was political disagreement in the room, the Liberal Studies and Russian Studies departments wanted to continue bringing Russian exchange students to CSUN as a way to continue improving the relationship between the two nations.