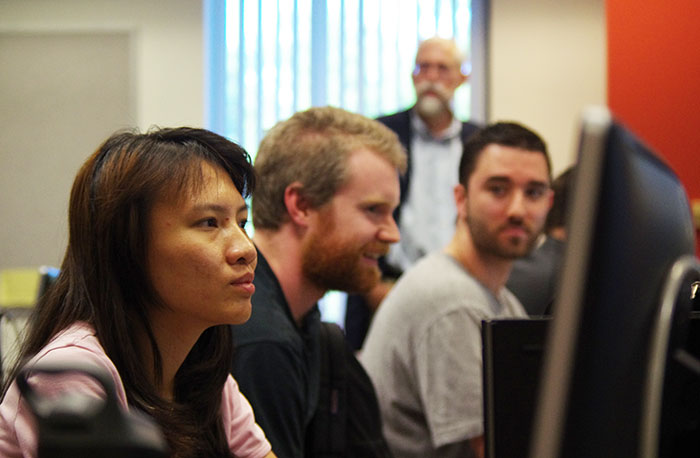 Tam Nguyen, along with Matthew Nyby, and Ryan Lassen, use the new finance lab in Juniper Hall, that was made possible by the recent donation from David Nazarian, on March 25. (Matthew Delgado / Staff Photographer)

The Department of Finance, Financial Planning and Insurance has started using a new software system called Telemet Orion that assists students investing money and managing a portfolio for the campus.

A recent donation by alum David Nazarian enabled the department to open a new finance lab on the second floor of Juniper Hall with computers using this system. The money for the investment is part of the University Corporation’s portfolio and ranges near two and a half million dollars for students to adjust.

The software provides data for student use as well as analysis features that help them decide which stocks to buy and sell and how their portfolio is performing, said Professor Michael Phillips.

“One of the exercises that our students do each semester when they begin using the Telemet software is to go and find a number of financial items from the freely available resources and look at the differences in the values for those items, the inconsistencies and just out-and-out errors, and compare that to the high-quality data which is on the Telemet software and can be verified by going to the official government filings,” Phillips said.

Students from the class last fall and interns at the Center for Financial Planning said that features of the software help filter potential investments to the ones that fit their needs.

“We run a query, a search on the entire list of stocks that exist in the entire universe, based on criteria that we’ve established that constitute a successful investment,” said Mitchell Beck, a graduate student.

For example, Beck said, they can tailor their search to investments with positive returns over a certain period of years. These have to be in alignment with the minimum threshold set by the University Corporation and are optimized by algorithms within the system.

As the class incorporates the system, it will enable them to use more of the features for work on newer portfolios.

“Telemet will provide the means for students, even off campus, to be able to have a professional quality financial monitor showing what’s happening in the market and what’s happening with our portfolios in real time,” Phillips said.

The department is also considering purchasing dedicated terminals for a similar Bloomberg financial analysis software. They would provide different kinds of data but, unlike the Telemet system, could only be used on campus at those terminals.

“It is predominantly for finance students, however, we technically have a site license so if there are other students on campus who are interested, they can contact the computer lab coordinator,” Phillips said.

He plans to make Telemet a part of the Finance 302 class, an online personal finance general education course that shows students basics about stock and bond analysis and managing a mutual fund.

“That is just a marvelous example of how Mr. Nazarian’s gift is not just helping us in very transformative ways but is having a major positive impact on students across campus,” Phillips said.

While students in the class say it is a significant improvement on the resources they previously used, it has its drawbacks.

“It is conservative in adopting new user interfaces. So you sort of run into something that feels very much more like a 1990’s program but it is far easier to use and far more accessible than most of the other financial programs out there,” Phillips said.

Despite its “clunky” appearance, it prepares students for similar software they will find in the job market.

Students have also applied their skills to improving the interface issue within the classroom. Arin Issagholian, a finance major, demonstrated a spreadsheet he created using the system.

“With the Excel sheet, I basically have a test for everything,” Issagholian said. “If it passes a certain approval rate for debt or profit or if it pays dividends or not, then I can update the stocks and see how many have passed and dwindle it down to a smaller list.”

The sheet compares companies across sectors and displays their activity in real time as well as over the span of years.

“It totally solves the interface problem because now you’re using Microsoft Office which everyone here is a professional level user,” Phillips said.

“Then we can do a little research into each stock and see what kind of story it tells us,” Issagholian said.