Candlelight vigil held for anniversary of the Armenian Genocide 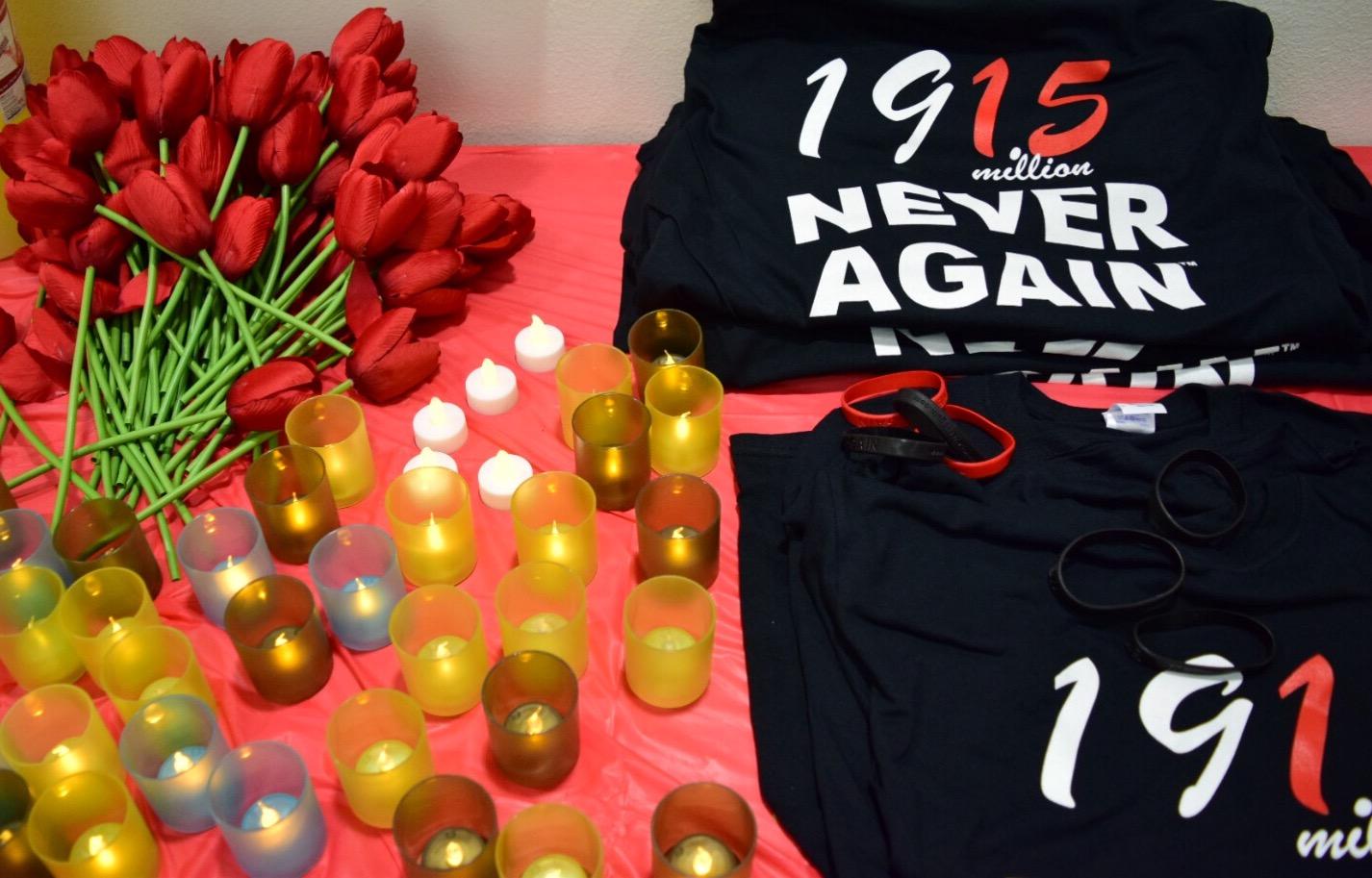 Bracelets and shirts that said "Never Again" were being given out by the Armenian Student Association and Alpha Epsilon Omega. Brandon Navarro/Photographer Photo credit: Branden Navarro

The CSUN Armenian Student Association held a candlelight vigil in the Thousand Oaks room of the University Student Union to commemorate those who were killed in the Armenian Genocide on April 22.

“We are here for the same reason – to show that Turkey failed,” said Christine Dashdemirians, president of the CSUN Armenian Student Association, in reference to the hashtag #TurkeyFailed on social media.

Plastic olive green, light blue and copper-colored candles were set by the table behind the room, which had refreshments and Armenian pastries such as ponchik, a cream puff sometimes called an Armenian donut. The candles would later be handed out to the audience, who would hold them at the end of the night’s activities.

“I’m Armenian, I wanted to see what they’re talking about,” said Margaryan. “I just want to be informed, the campus has a lot of Armenians here. We celebrate other cultures, we should take the day off.”

Margaryan referred to April 24, the official date of the genocide and a day of commemoration worldwide for the genocide.

The YouTube videos “Armenian Genocide Awareness Week at CSUN (100 Crosses)” and “Stain of Denial at CSUN (2015)” were shown at the vigil, made by students in ASA. The “100 Crosses” video highlighted the crosses behind the Oviatt Library, and the symbolism behind them – a cross for every year since 1915, the year the genocide occurred. The “Stain of Denial” video highlighted a silent protest in front of the Oviatt held by the ASA in February.

The vigil was part of a week-long series of events by the ASA recognizing the genocide at CSUN.

“I want to applaud you because for everyone that’s here, there’s probably five more that are not,” said the mayor of Glendale Zareh Sinanyan.

Sinanyan, who was one of the guest speakers at the vigil, urged those present to keep on holding events like the vigil.

“The significance is still here, because you’re not only commemorating the Armenians killed in the genocide, but you’re also informing your students at CSUN,” said Sinanyan.

The atmosphere was passionate at times. The issue of Turkey’s denial of the Armenian Genocide was brought up.

“An apology does not come close,” said Sinanyan of Turkey’s refusal to acknowledge the genocide. “If someone breaks into your property, kills and rapes your wife and kids, and lives on your property for 100 years, saying sorry isn’t enough.”

Part of the reason that more awareness is common about the genocide is the continued efforts of informing others about it, said chemistry professor Gagik Melikyan, who spoke at the vigil.

“They hoped that we wouldn’t be able to raise children to teach them the responsibility to learn about the genocide,” said Melikyan.

“All of you at the vigil have chosen to do something and reject apathy,” said Alexaninan.

The vigil ended with a moment of silence in commemoration of those killed during the genocide. Candles were handed out, and those present stood up. The room was packed, and a few people were standing in the back of the room. Most people had their head down and stood in silence.

Dashdemirians ended the night with an old expression said in Armenian: “We are here, we will be here and we will continue to grow!”