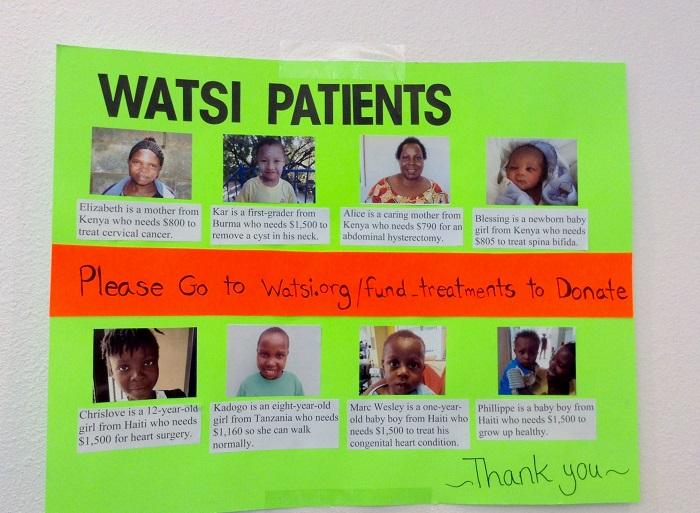 CSUN students helped raise awareness and funds for Watsi, a non-profit organization that enables anyone to directly fund low-cost and high-impact medical care for people in need from third-world countries, with a campus-wide event on April 23.

This organization, a crowd-funding platform, allows people willing to donate funds to select specific patients. After donations are made, you receive email updates to see how the money you funded is making an impact. The event also emphasized the idea of sharing with others a way to make a difference in the lives of people and knowing exactly where and to whom their money is going to.

The goal of the CSUN’s Watsi Club, as the members’ senior class project for CSUN’s department of health administration, is to help raise funds and show people a simple and easy way to make a difference in the lives of people who do not have the financial resources to cover their medical bills. CSUN Watsi is a new club on campus and just got approved in October 2014, hoping to raise $1000. As of April 23, the organization has raised almost half of its projected amount.

Julio Choy, historian for the Watsi Club, said that together the club and other class members have collected all of their funds within the past three weeks. The club members hope for the money raised to be an ongoing cycle and even if it is not reached by the end of the semester, they hope the CSUN community to continues donating money.

“It’s a great organization because you see where your money is going,” said senior Justin Paalisbo, a health administration major.

People do not donate money for things that might benefit the health and well being of others, said Aida Cham, president and founder of the CSUN’s Watsi Club. She said her goal is to help raise awareness for this event so that people will take the time to donate money to something that will actually make a difference in people’s lives.

“I want to see that my money is actually being used, you actually choose who you want it to go to,” said Paalisbo.

For more information about the CSUN Watsi contact the organization through :

Online donations are a minimum of $5