ASA holds art gallery in remembrance of the Armenian Genocide 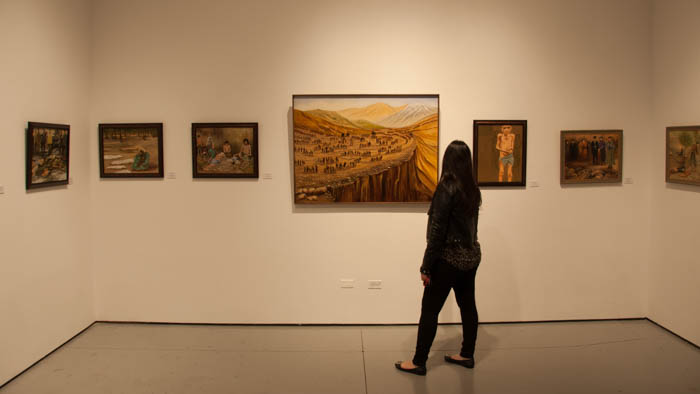 Attendants at the gallery could view a variety of painintgs depicting the Armenian Genocide. (The Sundial Photo/ Manny Araujo)

The Armenian Student Association (ASA) hosted the opening of their first Armenian-based art gallery on April 23. Several people crowded the Art and Design building’s West Gallery in remembrance of the Armenian Genocide 100 years ago on April 24, 1915.

The gallery featured 24 pieces of artwork collected from the CSUN community and nine artists of Armenian descent showing their take on the genocide.

“It’s just amazing how the art community has come together to spread awareness in a different way,” said the president of ASA Christine Dashdemirians. “We’re just trying to find different ways to express our thoughts about the genocide.”

Artist Rosik Assatourian has re-created over 40 pictures of the genocide into the several paintings that were featured in the art show that tell a story of before, during and after the genocide.

“I wanted to paint [the Armenian people from the genocide] and see how they are,” said Assatourian. “Like the woman sitting there with the children. I wanted to feel her.”

The painting she describes is titled “Despair,” with a caption that said, “A mother sits with her baby in her lap surrounded by her four dead children.”

Other paintings shown by her feature a more happy time, with “1915––Before Genocide,” showing men and women sitting around a cafe talking and enjoying one another’s company, to the heart-wrenching moments of death and misery amongst the other paintings.

Her largest painting featured is titled “The March.” The painting shows several hundreds Armenian people marching along a desert, surrounded by Turkish soldiers on horses and four mountains, which represent the four seasons: Winter, Spring, Summer, and Fall.

Rosik’s biographical paintings were very popular with the audience, as she was constantly bombarded with questions on what the paintings symbolized and why she chose to paint some Armenian women with head scarves.

The gallery also featured a family affair, as a mother and her two sons contributed to the gallery itself.

Artist and mother, Anna Mardayan displayed three pieces of art, each presenting a theme: survival, resilience, and hope. She captured these feelings through a graphically enhanced drawing of a woman’s tearful eye, with the reflection in her pupil of the symbol of the Turkish flag.

“I wanted to represent here, that we keep looking at Turkey, and we keep hoping that one day they’ll recognize the Armenian Genocide,” said Mardayan. “This is why it’s called ‘Hope.’ It’s time. It’s been 100 years, once it’s recognized then we call all move on.”

Her youngest son, ASA member Gabriel Dzhandzhikyan, contributed a painting of the Armenian alphabet and the Armenian flag, bringing his culture and what he knows to the forefront.

“For the hundredth year, I decided to do a painting for everyone to see,” said Dzhandzhikyan. “We grew up learning these letters and these three major colors, so I wanted to show everyone that.”

“Everyone has their own viewpoint and this is their viewpoint on the genocide,” said Dzhandzhikyan.

The artists said all the pieces of art held a story and symbolic message in their work, and how it represented their heritage, culture and the affect that the genocide had.

Viewers will find the apricot and pomegranate featured throughout the gallery, as the apricot is said to be the fruit of their country and the pomegranate represents the people, post-genocide.

“The pomegranate is more so a symbol of the genocide,” said Hakop Oganesyan, the son of artist Karapet Oganesyan, who was not present for the event. “Armenia spread the pomegranate throughout the world. The very poetic and artistic thing is that when its ripe on the tree –– it cracks and that crack can never be healed, and a lot of artists use that to describe our pain after the genocide.”

The art gallery is closed today for the anniversary of the genocide, but will reopen Saturday and continue through until April 29.