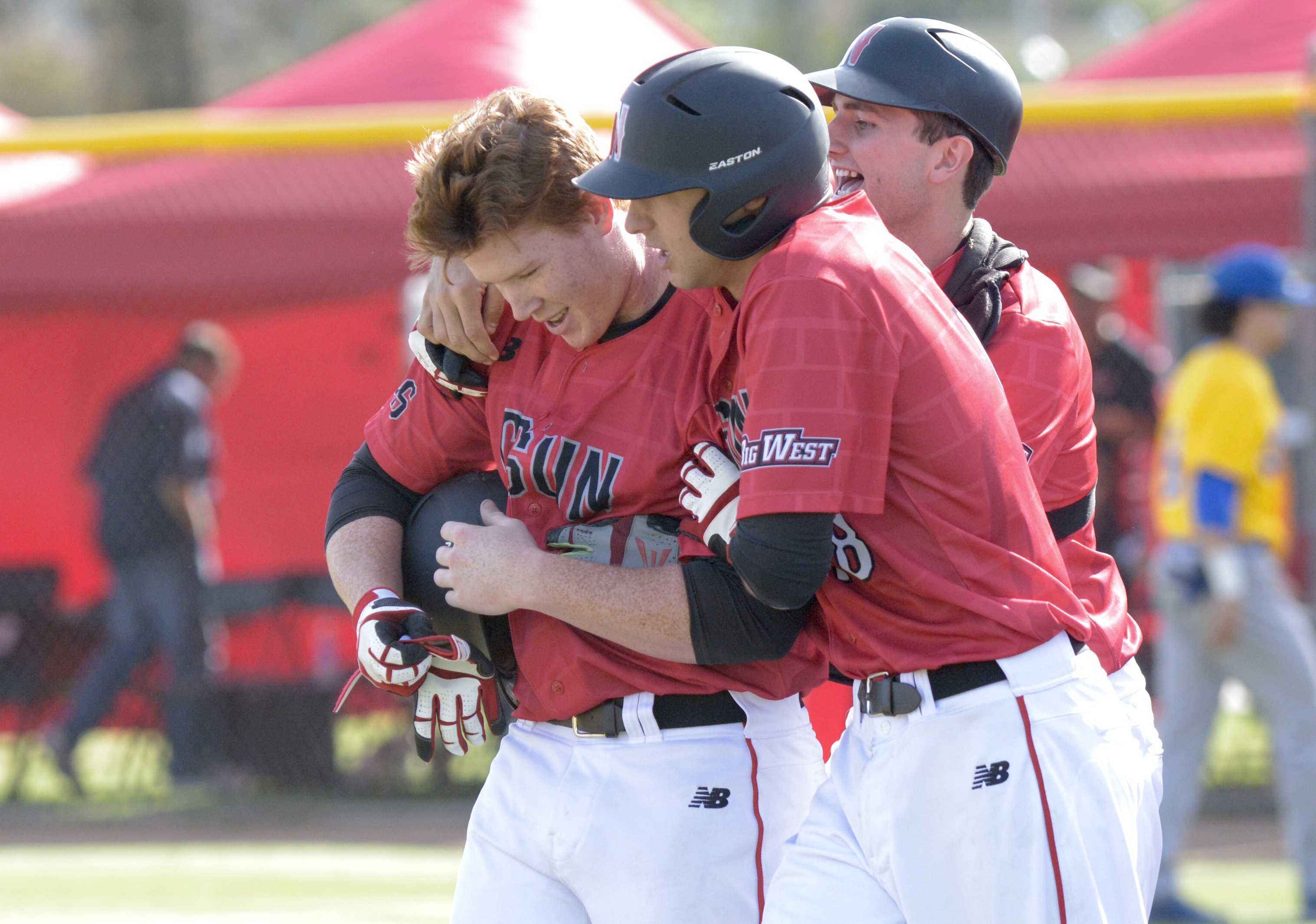 CSUN freshman Albee Weiss celebrating with his teammates as he gets the pinch-hitting walk-off walk to win the game Sunday afternoon against UC Riverside. Photo credit: Raul Martinez

After what looked like a déjà vu game, a walk-off walk and fifth inning outburst helped propel CSUN to a 10-9 victory against UC Riverside.

The Matadors were down 9-8 in the bottom of the ninth with bases load and one out. Senior Chester Pak got walked which tied the game, then pinch-hitting freshman Albee Weiss forced another walk to win the game.

“You have to have your own personal approach and just be simple with it, especially coming off the bench, it’s important not to try to do too much.” said Weiss on his game winning at-bat. “It’s a lot easier being able to be patient, sit back, and let the pitcher supply it.”

Though UC Riverside is last place in the conference, this was not an easy game for the Matadors to win and it took all nine innings to attain this series-winning feat.

CSUN trailed 3-1 through four innings. Then in the top of the fifth inning, two errors helped UC Riverside add three more runs to extend their lead by five.

For every UC Riverside scoring outburst, it seemed like the Matadors had an answer of their own.

In the bottom of the fifth inning, a grand slam by freshman Nolan Bumstead (3-4, five RBIs) and a solo home run by junior Yusuke Akitoshi helped give CSUN their first lead of the day.

“I was fortunate enough to put myself into a [pitch] count where I got that fastball.” said Bumstead on his Grand Slam. “I think we saw a lot more fastballs today than the first two games of the series and we took advantage of that.”

This was the first back-to-back home runs by Matador players since the 2009 season.

“When you get to Sunday, it’s really time to start making sure the matchups work out.” said Moore. “We have two guys in the back of our bullpen who are very good. They were both fresh today, and that’s Conner O’Neil and Joe Ryan.”

Four different pitchers came out of the bullpen for Moore, but it was freshman Joe Ryan (2-0) who received the win. After giving up a ninth inning lead-off walk, he then diced out three strikeouts in a row, keeping the Highlanders lead at one run.

UC Riverside freshman AJ Sawyer was a key cog in keeping the Highlanders in this game, going 2-for-4 with four RBIs, including a seventh inning two-run game-tying home run. On the other hand, UC Riverside’s freshman pitcher Jared Morton (1-2) received the loss, giving up the final two runs in the ninth inning.

The Matadors only have a day to enjoy this, as they travel on Tuesday to face San Diego State at 6 p.m., who they’ve already beaten.

CSUN will not be at Matador Field again until May 21, for their regular season Big West closing series against UC Irvine.