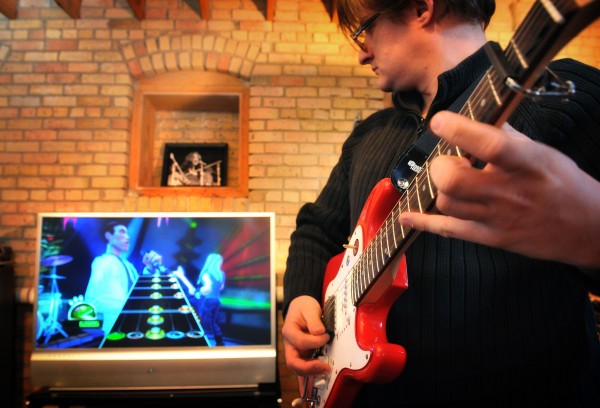 After five year of being absent from the video game world, the publisher of the critically-acclaimed music game, “Guitar Hero”, announced it will be bringing back the hit guitar game.

The new entry in the series is called “Guitar Hero Live”. However, even with the announcement, Activision Blizzard Inc. left some questions unanswered.

Rival competitor, Harmonix, and founder of the “Rock Band” series has also announced a plan for a new game, which will allow gamers to use older guitars and drum controls on newer consoles such as the Playstation 4 and Xbox One.

Activision Blizzard Inc. has not made it clear whether it will follow the same formula and allow users to save money by using older equipment from past consoles. One of the biggest drawbacks from the games might be that if the publisher decides not to allow older equipment, gamers will be required to spend a few hundred dollars on newer equipment.

This could be bad for the Guitar Hero series as it might see a flop in sales. Gamers don’t want to spend $65 for a game then another $150 for equipment they already own.

One of the main things series fans asked for was more game modes other than the usual “Versus” or “Tour” modes. Developers have revealed the game’s online mode, “GHTV”.

The mode consists of placing guitarists online against each other in a music video. The mode looks to make gamers really feel like they’re the stars of the music industry.

Another new aspect being implemented is adding more buttons to the end of the guitars. The original five colored buttons will be seeing an additional six buttons to provide a more challenging approach.

Both Guitar Hero fans and newer gamers to the series might be in for a treat with Guitar Hero Live. The game will implement newer features that will appeal to most casual and hardcore gamers.

However, with the most recent gaming dilemmas of false promises like Ubisoft and Ready At Dawn gamers shouldn’t hype themselves up. In the meantime, Guitar Hero should be something everyone can look forward to.