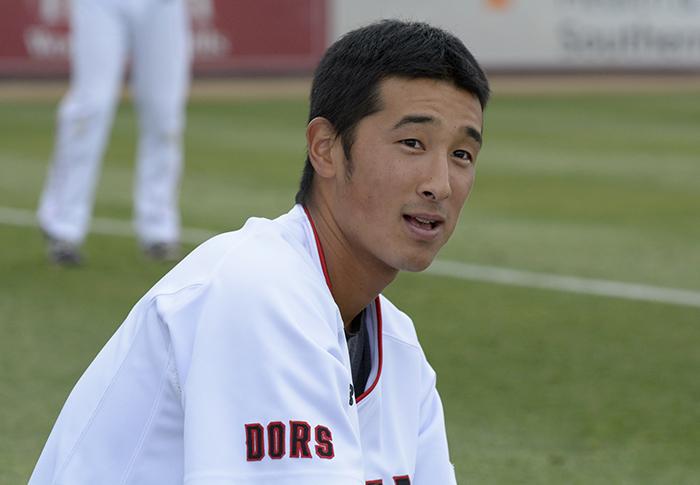 Stepping to the plate in the bottom of the fifth inning a 6-6 game, junior shortstop Yusuke Akitoshi steps in the batter’s box and crouches into his signature batting stance. Flicking his bat back and forth, Akitoshi contemplates the pitch he will see. UC Riverside pitcher Gabe Gentner, having given up a grand slam on a 3-2 fastball the previous batter, tosses up a hanging breaking ball over the plate. With a quick flick of the wrist, Akitoshi turns on the pitch and sends it over the right field wall for the go-ahead home run.

“We knew he was a really good contact hitter,” CSUN baseball assistant and hitting coach, Jordon Twohig, said. “He came back from Japan after Christmas time, after spending about three weeks there, and he really worked on the weights, trained every day over there with his old trainer, and came back and hit four home runs in three weeks and four doubles in that early spring time.”

There’s never a day when Akitoshi isn’t the first one out on the field to make the most out of his skills. The shortstop is always the first one at practice, rattling the batting cages an hour and a half before anyone else on the team arrives at the field.

With all the hard work, there is no surprise that the junior shortstop leads the team in batting average and triples, and is also second on the team for RBIs and stolen bases.

Akitoshi was born in Toyonaka, a city in the Osaka prefecture in Japan, and attended Tokohakikagawa High School, growing up playing second base. As he got older and bigger, he got stronger and was able to move over to shortstop. He improved his arm strength to completely fit his role in between second and third base.

“When I played second base, I got time to throw to first base,” Akitoshi said on his position transition. “But at shortstop, I have to think how I am going to throw and transfer it. I also get to throw harder.”

Upon graduating and deciding on his future, Akitoshi attended college in Japan, but quit in his first semester. so he decided to come to the U.S. to play baseball.

“I didn’t try to change my mechanics, I just needed to see more,” Akitoshi said on his decision to come to America, particularly Los Angeles, due to the distance between Japan and the city. “L.A. is a big city and my parents could have a chance to come here.”

Nevertheless, the shortstop has adapted well to the American life, largely thanks to his three teammates and roommates, Ryan Raslowsky, Spencer O’Neil and Nick Murphy.

“Outside of baseball, they help me a lot,” Akitoshi said about his roommates. “They’re really nice and they teach me a lot of baseball stuff as well as the language.”

Baseball is different in Japan, and the shift Akitoshi experienced thoroughly prepared him for what’s in store in a new country, and a new game style. Akitoshi notes that his native country focuses a lot more on fundamentals, the practices are longer and there is more emphasis on weight lifting in America than there is in Japan. Akitoshi struggled to hit at first because of the pitching, but quickly adapted and started hitting well.

“I think there is a huge difference between Division I and community college,” Akitoshi said about the level of difficulty it took to adapt to a new environment. “The pitchers throw a lot harder and it was tough for me to adjust at first. My eyes are getting used to seeing the ball.”

Akitoshi first started playing shortstop in junior college at Skagit Valley Community College in Mt. Vernon, Wash. The shortstop had received offers from Texas State and seriously considered committing to Oregon State, but opted for CSUN because of the coaching staff. Akitoshi is currently majoring in psychology, and says the workout routines and school work have been difficult to cope with.

“Classes have been pretty tough compared to community college,” Akitoshi said. “School and working out has been way more intense than before.”

Akitoshi’s favorite baseball players include Ichiro Suzuki, Derek Jeter and Robinson Cano, and roots for Major League Baseball teams that have Japanese MLB players. Although his stats are offensive heavy, Akitoshi is very proud of his defensive efforts that he’s kept consistent throughout his playing career.

“Even though I hit, my strongest point is defense,” Akitoshi said. “My defense is the same, but hitting is different. Hitting is against pitchers, but defense is against the ball.”

Twohig believes Akitoshi’s best features is his ability to read the game.

“He’s a very good baseball player in terms of instincts,” Twohig said. “He sees things other people don’t see on the field, in terms of timing – when to throw runners out or when to move into certain spots. He’s just an older player that really gets it.”

After college, Akitoshi plans to get drafted and continue playing baseball for as long as he can. Coaching baseball is also something the shortstop plans to experience once his playing career comes to an end.

But to be successful in his endeavors, Akitoshi will stop at nothing to improve on his game and scurry through to the top of the charts.

“It doesn’t matter how I feel,” the junior shortstop said on his daily routine. “I will hit the cage everyday.” 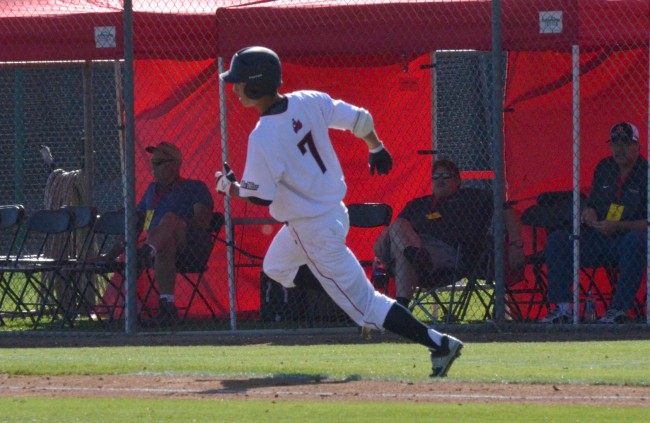