It’s a long road to a higher education 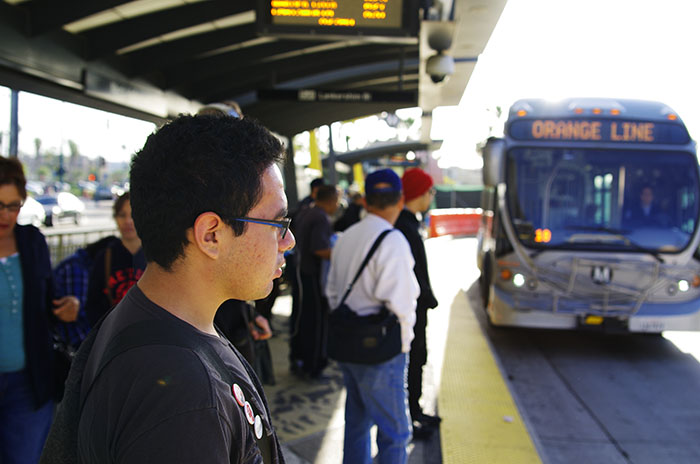 Commuting to CSUN could be probably the worst thing about the school. Its time-consuming, with traffic backed up for blocks. Even worse, having to spend more than half an hour looking for a mediocre parking space, and in the end to only be forced to look to another parking lot. Luckily and unfortunately, not all students have to do that. Instead, some spend their time taking public transportation to and from school.

For the past year and a half, Michael Herrera, 20, a sophomore journalism major, has spent roughly five hours of his day riding buses and trains to and from school.

On Thursdays, Herrera wakes up at 5:30 a.m. to board his first bus at 6:20 a.m., where he transfers from one to the next until he gets to campus at around 9 a.m., just in time to hurry to class and start his school day.

Monday through Wednesdays his classes start at 11 a.m., cutting his trip by only half an hour, but it still takes him almost three hours to get home everyday.

Herrera notes that buying a car is not an option, even if he wanted it to, because he cannot afford one at the moment.

“There’s that financial barrier,” Herrera said. “I don’t have a job, so I would still need to save up for a car, and my parents need their cars. Because I would need to save up, that’s why the bus was my only option.”

Add on the price of gas, insurance and a parking pass, and the cost of the car isn’t his only problem.

The second logical thing to do was either to live in the dorms or an apartment nearby, but Herrera says that plan fell through too.

He intended to live in the dorms prior to even considering commuting but, again, money put a halt to his plans.

“It’s easier said than done,” he said. “I was originally going to live there but I would’ve needed to take out loans. Even if I took out loans, I wouldn’t have enough.”

Even though other campuses, such as Cal State L.A., were closer to where he lives, education outweighed proximity and comfort.

While costs for taking public transportation may be cheap, it is costing Herrera the majority of his time and limiting when he can be involved with the campus.

Four days of the week, he follows a strict schedule, where he needs to leave around 2 p.m., only to get home around 4:30 p.m. every day. Leaving the campus any later deters his schedule by more than thirty minutes, essentially spending more than 10 hours a day away from home, with only three of those spent in class.

In a week, Herrera spends well over 18 hours commuting alone, leaving little to no time for any extra curricular activities on campus.

Herrera recalled his first semester at CSUN, and wanting to join the Public Relations Student Society of America (PRSSA). He was able to attend only four meetings before having to call it quits due to the club’s one hour evening meetings starting at 7 p.m.

Unlike some students, where they don’t have the time to be more involved with the campus, Herrera has time, but it isn’t his to control.

Aside from the time consumption, riding the bus can be both physically and mentally exhausting. On any given day, bus arrivals and departures can change due to bus/train failures, traffic or accidents, forcing people to sometimes literally run to their next stop.

“It’s physically draining and very tiring, especially when you get home,” he said. “The journey home is the worst because you just want to get home, but you can’t because you know you still have two and half hours to go.”

Not only that, but trying to stay awake from an exhausting day while a bus rocks you to sleep is worse. Constant vigilance can be just as important, especially when passing hundreds of strangers.

Similar to Los Angeles traffic, public transportation has its own traffic hours.

Early mornings and late afternoons tend to be the busiest. It’s not uncommon for all of the seats to be taken, forcing the rest of the passengers to stand and be packed tightly in.

Herrera recalled how the beginning of the Fall semester in August, during the heat wave, was the worst time to ride the bus.

“The bus was so packed, everyone was sweaty and it was just really nasty in there, but there is nothing you can do because its public transportation,” he said. “You’re just there smooshed against sweaty bodies.”

Not everything about his time is negative though. His time has allowed him to gain more human empathy.

”I’ve had people [fall] asleep on my shoulder,” he said. “I feel bad if I wake them because they probably had a hard day and they’re just sleepy.”

While having a long commute on public transportation is tiring and time consuming, Herrera says there is a sense of freedom when you relinquish control. Something, he says, you can’t do when you drive.

”I don’t really have to think about anything expect my next stop. So, I can just be on the bus reading or doing homework.”

In doing so, Herrera says he gets a lot of his school work done, allowing him to actually rest when he gets home and not scurry to finish an assignment.

CSUN is trying to keep up with the wave of public transportation commuters. There are several bus stops that directly stop near or on campus.

“I feel like [CSUN is] doing what they can because I don’t really see anything else they can do, unless they go pick you up at your house and bring you to school. I feel like its sufficient enough,” Herrera said.

CSUN does offer students a substantial discount on their TAP cards. With a student I.D., people can refill their student TAP cards for $23 a month, compared to the $80 refill charge directly from Metro.

Krystal Laughton, supervisor at the A.S. Ticket Office, said roughly 370 students have TAP cards that were purchased through ticket office.

Laughton further estimates there are more than 300 students who ride public transportation but don’t purchase their bus pass from CSUN. With the Antelope Valley Transit Authority and Metrolink, both of which are connected to Metro but not the A.S. Ticket Office, she thinks there is a large amount of students and faculty who use some form of public transportation to get to school.

Similar to Herrera, she believes that the price of the bus passes may outweigh the time it takes to get to school.

“If the time and the price is worth it compared to the price of the dorms or getting an apartment with friends or people you don’t know, then it would be worth it taking the two hour and half hour trip every day, unfortunately,” Laughton said.

Even with its pitfalls and advantages, Herrera has a simple view of it.

”You get used to it,” Herrera said. “I don’t know if its something people should get used to, but I have to do it.”