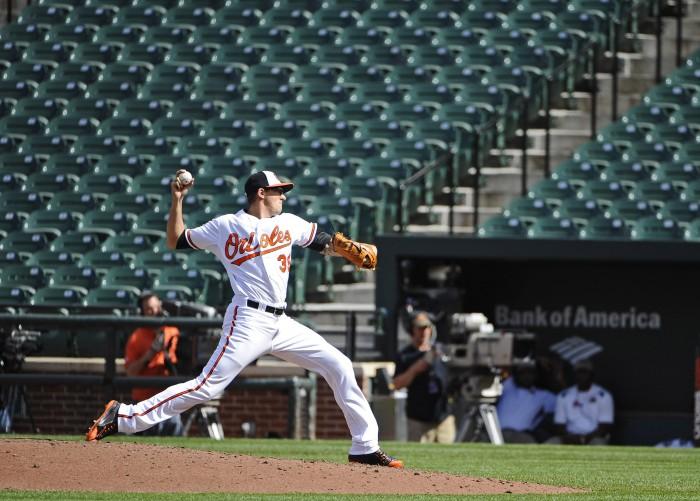 Baltimore Orioles pitcher Kevin Gausman pitches against the Chicago White Sox during the eighth inning on Wednesday, April 29, 2015, at Camden Yards in Baltimore. The game was closed to the public due to unrest in the city this week. (Kenneth K. Lam/Baltimore Sun/TNS)

In an unusual turn of events, the Baltimore Orioles made Wednesday’s game against the Chicago White Sox closed to the public, in lieu of the unrest in Baltimore.

The decision to basically have the Orioles play in an empty stadium has been met with a pensive and an uncertain reaction among the CSUN community.

“I guess it’s not fair,” Coulson Lantz, a 29-year-old staff member at CSUN’s biology department, said. “But nothing really is.”

Despite the likely loss of revenue, the MLB deemed having fans at the game unsafe. However, many baseball fans and spectators are torn about whether or not shutting fans out was the correct thing to do.

“I think there’s good things about it and bad things about it,” Mauricio Cortes, a junior construction management major, said. “It’s not fair because there are [some fans] effected by someone who’s not involved in the riots.”

Concurrently, other people feel that it was fair and necessary for the Orioles and the MLB to take the precautions they did.

“You’ve got this thing where right now you probably wouldn’t want to let the majority of Baltimore into your house or stadium or whatever it is,” said Lantz. “But that’s a stereotype to say that everyone is rioting and looting, and everyone is liable to be arrested for what they’re doing right now. Who knows, maybe it’s a small part of the population that’s doing it.”

But like several members of the CSUN community, Lantz struggles with the idea of punishing segments of people for things they didn’t do.

“I understand the Orioles actions because you can’t stereotype one group, so you can’t let anybody in,” Lantz said.

On the other hand, some people feel that it’s unfair to fans that just want to watch a baseball game.

In addition to just watching a baseball game, Sanford felt that letting the people of Baltimore watch the game can help ease the tension within the city.

“I think with any sport, show, or entertainment, you kind of get jumped into another world,” Sanford said. “You don’t have to worry about the outside cause you’re just stuck in that one [time] zone.”

On the contrary, others feel that there is too much vitriol and restlessness in the city for a baseball game to make any difference.

“I think things are way too heated for that,” Lantz said. “I think they’re well beyond a sports venue providing some type of relief.”

Cortes echoed Lantz’s sentiments, voicing his belief that a single game cannot shift the complexion of a city.

In spite of the impact, or lack thereof, that baseball can have on Baltimore during this time of turmoil, Lantz feels that the team can still contribute without even playing the game.

“A team like the Orioles, which has a lot resources and stuff, could probably spend the time and effort not playing a baseball game, but standing up for their city and doing whatever they can do to maybe help out the incident,” Lantz said. “I think playing the game is a little bit naïve to what’s going on.”

Another popular opinion among students is that the game should just be cancelled and rescheduled, considering the magnitude of the violent protests.

“If it was a big problem, they probably should’ve reschedule the game,” Cortes said. “That way people wouldn’t be upset about losing their money or whatever.”

With the ambivalence and passion surrounding the city of Baltimore moving forward, it is unclear what the immediate future holds for the Orioles and their fans. Regardless, the team and it’s city have a strong bond that will be intriguing to monitor, especially in terms of attendance and support.

“Sports are so tied into everyone’s life, and they do become some sort of a religion,” Lantz said. “They represent much more than just a business.”