Winners and losers of the 2015 NFL Draft 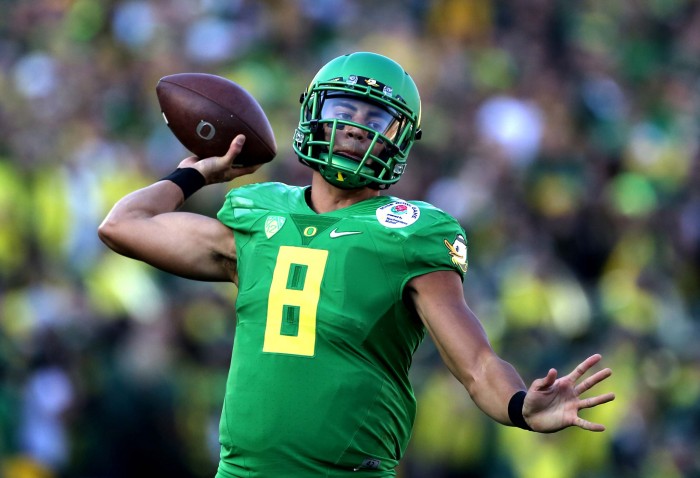 Every year, the NFL Draft brings the best reality television. People laugh and people cry, and the spectacle was brought to Chicago for the first time ever. Here are some of the best and worst moments from Day One before the second round gets underway at 4 p.m.

Sure, Gurley was the best running back in this draft and probably a top-10 talent. However, that’s a high investment for a player who won’t even play on day one due to an ACL tear last season.

Agholor might be a first round talent, and he might take off in Chip Kelly’s offense. However, the Eagles missed the playoffs last year because of defense, not pass catching. They invested two draft picks in receivers last year and they have many other roster holes.

Long ago Ogbuehl was considered a top-10 pick. Injury and questions of his ability dropped his draft stock tremendously. Even if a tackle is a premium need in the league, this is high for a guy to be your right tackle or guard. Maybe Cincinnati got their tackle of the future, or maybe they got the next flop at tackle from A&M.

How did the “can’t miss prospect” fall to No. 6? The Jets’ got even wealthier at defensive line because Williams fell right into their lap. Hopefully, he gets enough playing time to develop, but new head coach Todd Bowles is clearly creating an identity for the Jets.

What better replacement for Brandon Marshall than a phenomenal athlete in Kevin White? No excuses for Cutler now as White should thrive in Chicago offense already filled with playmakers like Alshon Jeffries.

With a great motor and production at Texas, many had Brown as a top-10 talent. The Patriots laughed all the way to the bank when he was on the board at 30. The versatile defensive tackle can be the replacement for Vince Wilfork, who left New England via free agency.

First Round Leftovers will go fast

If players rise then some are bound to fall. This is the case with top talent like Randy Gregory and Landon Collins falling out of the first round. Don’t expect them to be on the board long. Collins is too athletic at the safety position to fall much further. Gregory has character concerns but issues with marijuana didn’t stop Shane Ray from falling too far from his draft value.

There are still plenty of playmakers available in this draft. Duke Johnson, Jay Ajayi, Ameer Abdullah and Tevin Coleman are some part of astacked group of running backs still available. As for receivers, Jaelen Strong, Dorial Green Beckham and Devin Smith are pass catchers who could have went in the first round. Expect a lot of playmakers to come off the board on day two as there are plenty of players who could spark offenses still available.

Who is the next Quarterback selected?

After the two Heisman Trophy winners, the drop off from quarterback is huge. Where will the next quarterback be selected? Will it be Bryce Petty or Brett Hundley? Will no one get selected until Day Three? We won’t know until tomorrow.