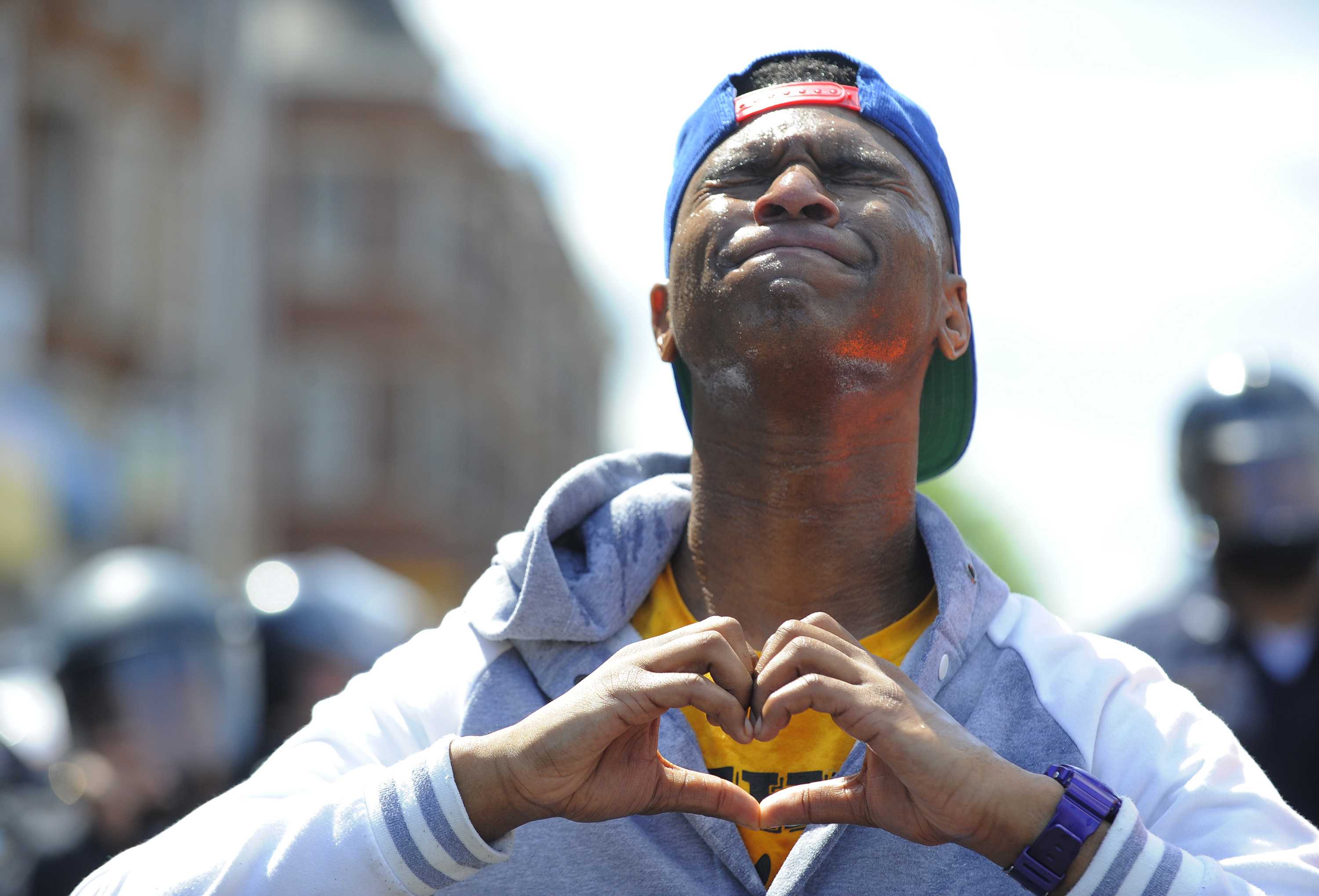 Devante Hill makes a heart with his hands after he was hit with pepper spray after someone threw a bottle at police on Tuesday, April 28, 2015, in Baltimore. (Lloyd Fox/Baltimore Sun/TNS)

Police brutality against minorities, specifically African-Americans, has been a continuing occurrence across the country and is becoming increasingly publicized—especially on social media.

Every occurrence continues to cause more and more tension the more they happen. And, the fact that cannot be denied is, there is social injustice and police are at times, contributing to those injustices.

The black community has taken a firm stand by holding rallies and other events in numerous cities—stating that the injustice must stop. Despite personal opinion about police officers or minority victims, they have a legitimate point.

From Trayvon Martin, Eric Garner, to now, Freddie Gray, and everybody else in between, the level of justice seems skewed against African-Americans.

The black community has every right to be livid about the noticeably social injustice plaguing them across the nation. Even Morgan Freeman has critiqued the media coverage.

Freddie Gray’s death in Baltimore, which is the high-profile case right now, is looking like another case that involved police brutality.

Before this ruling, it was the lack of quick deliberation and genuine care for Gray’s death which sparked the Baltimore riots and protests.

The rioters appalling actions of looting, destroying businesses, bashing police cars, etc. definitely slighted the peaceful protesters. Most of the attention was being displayed negatively, in turn hurting their cause.

Toya Graham—mother of a rioter, actually physically confronted her son in the middle of the riots. However, not because she agrees with police brutality, but because she didn’t want her sons life to end like Freddie Gray’s. And, regardless of the police brutality, rioting for any reason, especially to the degree in Baltimore, can also end innocent lives.

Also, watching Trayvon Martin’s family join the protesters in Baltimore shows how people from both sides of the debated topic forget what this cause is really about: lives matter.

Black lives, White lives or any other race. A person died in the custody of police and other cases of police brutality occur. Justice must prevail and from the black community’s perspective, justice has not been consistently fair.

If anyone is shocked by these protests or does not understand the frustration, disappointment and anger in Baltimore and other cities, then the message that lives matter is being surely overlooked.

This is obvious through laws like, the Oklahoma hoodie law. Though the law is not prohibiting people to casually wear hoodies, it portrays a bad image because soon after a kid dies from wearing a hoodie, the first thing to do is ban hoodies?

I know this is not what they’re trying to accomplish, but that’s how it seems. These underlying issues are the exact problems involving police brutality and why there are protests.

You hear comments like, people should just conduct themselves better and not act like “thugs”? Or, if he dressed a certain way he wouldn’t be profiled.

Though I agree people should conduct themselves in a professional manner, all of those are justifications to derail talking about the real issues at hand.

11-year NBA veteran Thabo Sefolosha has never been in the media for breaking the law and was recently involved in a situation with the police, where his leg was broken with the facts still unknown.

There is an abundance of stories of people getting pulled over, harassed or profiled for no apparent reason, though they might dress “right” and act “right”.

Saying that human behavior and this cycle of brutality can change is a tough call, because judging someone is part of humanity, which everyone does.

However, until there’s a social dialogue of understanding the plight of losing lives—especially when in the hands of police officers— then there will always be a two steps forward-ten step backward approach to issues like these.