Marvel shows its dark side with ‘Daredevil’ 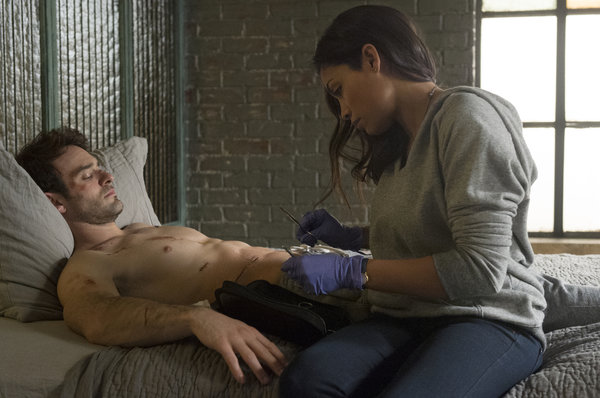 With 10 films, two network television shows and plans for the next four years already in the pipeline, Marvel Studios has completely redefined the superhero movie genre. “Marvel’s Daredevil”, the company’s first foray into Netflix entertainment, continues Marvel’s tradition of epic, character-driven storytelling, and boy, is it good.

“Marvel’s Daredevil” is the first of five planned Netflix original series focusing on “street-level” Marvel superheroes (think Spider-Man as opposed to Thor). Despite a notably darker tone than what the studio usually supplies and the lack of Avengers Tower in the New York City skyline, rest assured that the show firmly takes place within the Marvel Cinematic Universe.

The 13-episode series focuses on Matt Murdock/Daredevil, a fresh-out-of-law-school attorney who opens his own firm with best friend Foggy Nelson. Blinded at a young age in a car accident (while simultaneously gifted with heightened senses), Murdock spends his days defending clients from murder charges while moonlighting as the mysterious “Devil of Hell’s Kitchen.”

Brought to its knees by the devastating alien invasion portrayed in 2012’s “The Avengers”, Murdock’s New York neighborhood is in the midst of a transformation courtesy of powerful businessman and crime lord Wilson Fisk. Murdock finds himself at odds with Fisk and his philosophy, with both men using their own means to rebuild their city.

This dichotomy stands at the center of the show, with episodes following Murdock as he fights against the villainous and shadowy Fisk, beating up thugs in the street by night and practicing law by day. Also involved in the conflict are friends Foggy Nelson and Karen Page, who have been personally affected by the actions of Mr. Fisk, Ben Urich, a journalist for the “New York Bulletin”, and Claire Temple, a nurse who repeatedly finds herself stitching up the battle-weary Murdock.

Arguably, the first thing a viewer will notice about the series is how dark and outright violent it is when compared to other Marvel properties. The gritty, noir-influenced atmosphere of “Daredevil” works flawlessly, though I found myself cringing at some of the more gruesome sights (in one episode, a man is murdered by having his head slammed repeatedly by a car door until his literal brains fall out, puddling into a bloody soup on the ground). While the program’s tone is far-removed from the rest of the Marvel Cinematic Universe, it manages to establish itself in a unique and almost self-contained corner of that world.

Led by Charlie Cox as the titular Daredevil, the show is filled with phenomenal performances all around. Cox conveys his character’s internal struggles as a late-night vigilante perfectly, with several scenes between Murdock and his priest illustrating the moral battle he faces deciding how to put an end to the terror caused by antagonist Wilson Fisk.

Murdock is propelled by an intense inner anger, juggling his Catholicism with a relentless drive for justice. Additionally, Cox’s acting as a blind character is spot-on, making it quite apparent that utmost care had been taken by him when preparing for the part.

Vincent D’Onofrio’s Wilson Fisk is both a truly terrifying and truly great villain, even succeeding at drawing some sympathy from me as he detailed his ideals and hopes for his neighborhood (note: some sympathy). Even supporting players like Rosario Dawson and Bob Gunton are outstanding in their roles. Still, some performances aren’t great: I found Elden Henson’s Foggy Nelson a bit irritating at first, particularly due to the actor’s uneven portrayal, though he improves as the series progresses.

Like any superhero show, “Daredevil” is packed with action sequences – and they don’t disappoint. Fights are stunningly choreographed, with quality equal to those of “Captain America: The Winter Soldier.” Combat is also grounded in realism, with Daredevil becoming visibly fatigued during his frays. I found this refreshing, as I’m so accustomed to watching TV and movie brawls in which combatants never seem to grow tired throwing kicks and punches for minutes on end.

While the storytelling is, for the most part, very sharp, it occasionally begins feeling a bit clunky, especially when the show is clearly setting up for shared plot elements in future Marvel series (“A.K.A. Jessica Jones”, “Iron Fist,” “Luke Cage” and “The Defenders”are all in the works for Netflix).

At times, “Daredevil” feels like a Marvel show that doesn’t want to be one: while the alien invasion in “The Avengers” is referenced as the catalyst for the series’ events, it is never explicitly referred to as an alien invasion. References to Captain America, the Hulk and Iron Man are scattered about, but the series attempts to stand alone while still connecting to other Marvel properties.

For this reason, “Daredevil” is a show casual viewers and Marvel fans alike can enjoy. While it isn’t heavy on the fantastical elements already established in its world, it employs enough references and other treats for die-hard Marvel fans to eat up.

Simply put, while not perfect, “Marvel’s Daredevil” is one of the most thoroughly entertaining and captivating shows I’ve watched in a long time. With a cast of deeply compelling characters and a story that will keep viewers binge-watching for hours at a time, this series is one you have no excuse for not seeing, even if you aren’t a fan of superhero stuff. Grab your popcorn and that remote: you have a full weekend ahead of you.