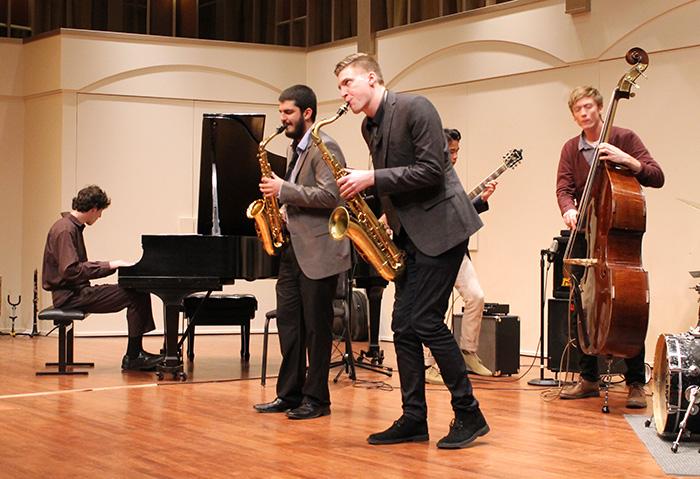 Nestled near the bottom of Northridge campus with an unassuming red brick facade, Cypress Hall hardly endears itself to the casual passer-by. However enter through the doors and one can start to understand the magic within.

In a small room on the second floor sits Matt Harris, director of CSUN’s jazz department. He sits in front of a baby grand piano, surrounded by the multitude of awards and plaques that hang from his walls.

Alongside professor Gary Pratt, Harris has developed the Northridge jazz program into an absolute powerhouse.

Last November, the Hollywood Reporter ranked CSUN’s music school as 22nd in their list of the top music schools in the world. With a yearly tuition far less than the other US programmes on the list, Northridge has overperformed incredibly for the last ten years.

A major contributor to CSUN’s impressive reputation has been the consistent dominance of the jazz department.

“I would say that we are definitely one of the top jazz programs in the nation,” said Harris.

“I find it obscene kids are dishing out $60,000 plus a year to go to these fancy music programmes which are, most of the time, not even as high quality as ours.”

The results on this year’s Jazz Festival circuit back up Hariss’ claim.

This year’s festival season has seen gold at the Reno Jazz festival and the Earshot Jazz Festival. These festivals are among the top regarded in the nation, with invites sent to only a select few schools.

“To combine that with our success against ensembles filled with post-graduate students is really remarkable.”

CSUN only offers Jazz as an undergraduate degree, but is responsible for sending students to a lot of high-caliber masters programs, major orchestras and to LA’s entertainment industry.

Harris’ pedigree as a musician has also helped propel this success.

He arrived in LA after touring as a pianist with jazz legends Buddy Rich and Maynard Ferguson before becoming a staple of the LA studio scene. Harris has six CD’s to his name, and has been commissioned to compose music all over the world.

Moreover, his reputation has helped to recruit some of the best musicians in LA to become professors here, a major factor in CSUN’s excellence.

“Our teachers are kind of the ‘who’s who’ in the LA music scene,” said Harris.

“We have guys like Bob McChesney (trumpet), Bob Pisano (guitar) and Gary Pratt (bass) who are all world renowned, and are dedicated to the development of our students.”

It is this high caliber tuition that drives some of the best musicians from around California to audition for the Northridge music school.

One such student is senior Jazz major, Shai Golan.

Golan was regarded as one of the top musicians in the country out of high school, but he had decided early on that Northridge would be the best place to hone his musical craft.

The same place his father came to play the saxaphone 33 years ago.

“It was my Dad that got me into playing music, and he was always sure that CSUN would be a great fit for me,” said Golan.

“I picked up the saxophone when I was very young and I knew that I wanted to play music for the rest of my life. I play all the saxophones, the flute, the clarinet, the drums and the piano, but the saxophone is definitely my calling.”

Golan has managed to get work as both a studio and band player in LA throughout his time studying. His career highlight came just last month when he was named best composer and best soloist at the Keep an Eye International Jazz Competition in Amsterdam.

He will head back to Amsterdam this summer on an all expenses paid trip to work alongside some of the best jazz artists in Europe. After that he will begin his master’s degree at the Manhattan School of Music.

Golan credits his experience working out of Cypress Hall as being crucial to his musical development.

“Everybody that is a part of the program, from the students to the faculty, are at such a high calibre, and there is so much exchange of ideas and creative energy.” said Golan.

Harris understands that recruiting talent like Shai is integral to the continued success of the program.

“Like recruiting football, it’s all about talent identification,” said Harris.

“We have a lot of students coming in to audition and we can only select a few. It all boils down to where we see their ceiling at.”

“High schoolers heading into college are all doing their homework these days. They’ve all heard names like Shai Golan, so it gives our department some major prestige.”

Matt Harris believes the department is only getting stronger.

“In some ways we can’t compete with the resources of schools like USC. But when you factor in our continued quality, and the way everybody is striving so hard to get better, than I think the only way to go is upwards,” said Harris.