2016 Presidential Campaign- the odds are in her favor 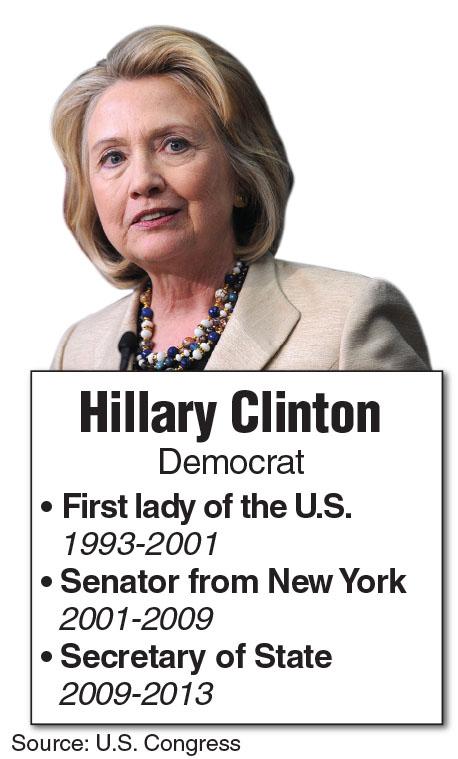 And by her—I mean Hilary Clinton. Let’s face it, she is the most normal candidate, everyone knows her, and more importantly, the democratic bloc is rising higher than the rest.

Hillary Rodham Clinton has a long list of accomplishments preceding her run in the 2016 presidential elections. The former U.S. Secretary of State, First Lady of the U.S. and 2008 Democratic Party’s lead candidate has had many years of success in the public eye, aside from her email scandal earlier this year—which based on some preliminary polls, did change a small percentage of public opinion on Clinton. But still, her popularity is in favor when compared with the opposing party. Republicans lack popularity. The Republican equal is most likely Jeb Bush, and even with his popularity in the public, he still falls short in public opinion ratings, according to Huff Post Pollster.

But, Clinton’s success will not just come from popularity alone, but the factual democratic bloc lead will. The very reliable Pew survey reaffirms this Democratic majority after President Barack Obama’s reelection in 2014, Democratic public opinion stayed above the Republican party.

Still with popularity ratings and favoring surveys, all pundits do not favor this Democratic reality, nor do they believe Clinton will win in the 2016 presidential campaign. David Brooks, a columnist for New York Times suggests that the GOP nominees are on equal playing field with Clinton. Brooks also added that regardless of the outlook on the Republic Party, Clinton is still at risk of being defeated. Other sources foresee Republicans having a lead with young voters, in addition to their favorable older voters. According to a political survey, Survey of Young Americans’ Attitudes Toward Politics and Public Service: 26th Edition, from Harvard University, I can understand this perceived notion. After eight consecutive Democratic years I don’t blame Republicans for their eager hopefulness to get one of their party members into the presidential chair. And, if U.S parties had an exhaust limit, the Republican Party would win without a doubt or any factual odds.

A gold standard for political polling comes from the Pew Research Center. A survey involving both parties was conducted to analyze the 2014 midterm elections which many said were the result of a Republican voter increase. Yet, survey results tell differently with Democrats still leading public opinion.

With that being said, Clinton has a major advantage with her popularity in the public and party affiliation. Out of the small number of less familiar Democratic candidates, The Economist assures that Clinton “has no serious rivals yet for the Democratic nomination.” And, unless one of these no name runners can somehow build up a similar level of credibility in a 1.5 year campaign, that has taken Clinton decades; it’s our girl for the win!