Softball: CSUN will rematch No. 7 UCLA in NCAA Regionals first round 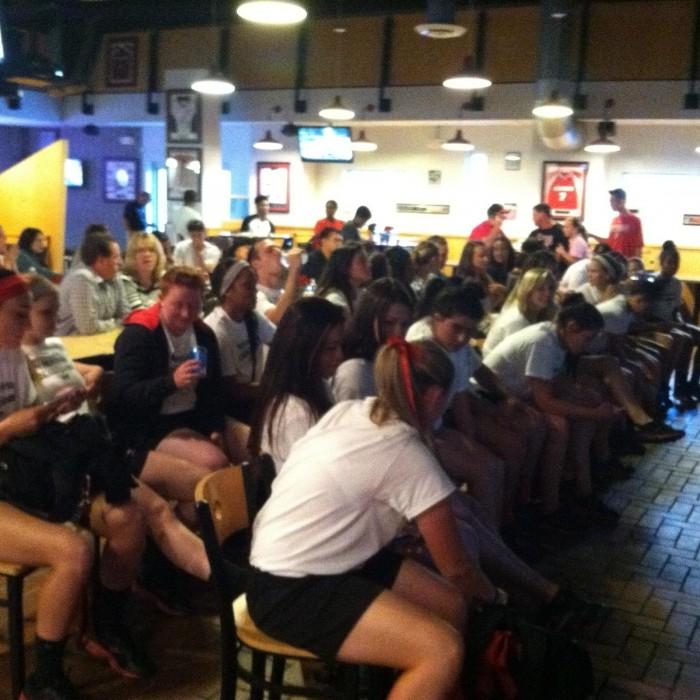 The CSUN Matador Softball and fans alike packed the Pub Sports Grill in anticipation of their eventual opponent in UCLA in the first round of the NCAA Regionals Tournament. Photo Credit/Corey Brumfield/Documentary Editor Photo credit: Corey Brumfield

“I feel like our hard work has paid off,” CSUN softball head coach Tairia Flowers said. “We’re at a time in the season where we can see what our success is and now it’s just time to play.”

The team grew more anxious by the minute as they watched two full regional brackets get filled before their name was called in the Los Angeles Regionals. All that pent up emotion was unleashed in the Pub Sports Grill once the team, their family, friends, faculty, and CSUN athletes like former women’s basketball player Camille Mahlknecht realized they’d get one more chance at the Bruins.

“Having a team who’s overcome so much this past season to have the success that they have, I think this is ideal for us,”  Brandon Martin, CSUN Director of Intercollegiate Athletics, said. “I think this is a formidable opponent but it’s an a opponent that I think we can win.”

“For our girls, we didn’t play our best against them last time so it’s an opportunity to get back at them,” Flowers said. “I don’t think you’ve seen the best softball from us yet and hopefully on Friday, you will.”

Conley continued to progress, and for her efforts, she was named one of 25 finalists for the National Fastpitch Coaches Association Freshman of the Year. Conley has a 19-5 record with a 1.58 ERA, 129 strikeouts and two saves in 150.1 innings of work.

“I’ve gotten a lot of support from my team and coaches with handling all the excitement that’s been going on,” Conley said. “Early in the year we played them (UCLA) and lost in extra innings so it’s kind of like a revenge type of thing an another opportunity to win.

The Matadors have not beaten the Bruins on the road since 1998. In the most recent loss, two 10th inning runs by UCLA capped off a 6-4 defeat.

“For us to be able to go over to Easton and play UCLA is great for us,” Martin said. “We believe in competing against the best and we’re excited about it. We’re always in pursuit of comprehensive excellence. Softball with their success is just another addition to what we’re trying to get done.”

Redshirt senior pitcher Brianna Elder has been a calming, consistent force for the Matadors all season on and off the field, especially during the selection show.

“I wasn’t nervous at first and then I saw my teammates leg shaking and some of them their palms were sweaty,” Elder said. “It was a heart-wrenching moment but I just tried to keep myself calm until they announced it, but then I just lost it eventually.”

The “Elder” statesman of the team has been able to build off a strong junior season where she was named to the 2014 NFCA All-West Region Third Team and the 2014 All-Big West Conference First Team. Elder has an 18-6 record with a 2.06 ERA, 190 strikeouts in 176.2 innings in 28 starts over 38 games this season.

“It’s been my greatest season so far here,” Elder said. “I’m very blessed with 22 other girls on this team who work hard every day to make us better players in the long run.”

Sophomore utility player Katie Hooper has been a part of the historic output in runs by leading the team with 15 home runs, batting .391 with 55 RBI’s, 34 runs, and two stolen bases in 55 games this season.

“It’s an amazing feeling,” Hooper said. “We’re all very excited as a whole and we’re all ready to take this regional and do our best in it.

CSUN last defeated UCLA when the then 9-15 Matadors upset the then No. 9 Bruins 3-2 on a Wednesday afternoon in 2013 due to a two-run home run by then junior Tanna Bindi, the first of her career, over the right field fence in the Matadors home opener that season.

“We went out there and did our best this entire season,” Hooper said. “It’s a great feeling now to be in the postseason an to be where we’re at right now is amazing.”

The Matadors will face the Bruins in Westwood on Friday, May 15. The game will be broadcasted on ESPN 3, and tickets go on sale Monday afternoon.