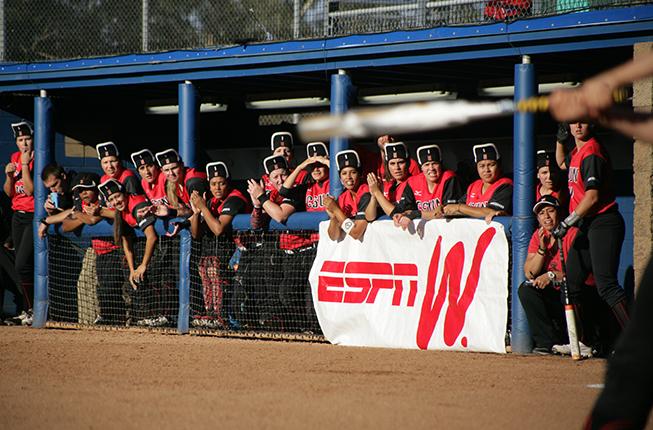 Though CSUN started the game on top, they were unable to stop the Bruin offense.

With two outs and nobody on, catcher Katie Hooper hit a home run over the right center fence to score the first run of the game.

“A lot of excitement ran through my body and knowing that I started something for my team in this game and that we could come out and do something as great as we did,”said Hooper. “It just blew my mind that I could come out here knowing I had prepared all week for this; it was great.”

The Bruins tried to answer back the next inning, but were unsuccessful. Two base hits and a walk loaded the bases for the Bruins. But with one out, they were still unable to score. A ground ball to short forced an out at home and a pop up to right ended what could have been a large rally for UCLA.

“I’d rather have (the home run) early than later, so that’s a good thing first of all, second, every time that our team comes together right after that, the infield comes together, it’s always positive thoughts and they always let me know they have my back, ‘we’re gonna get it done’, ‘ton of game left’. So I wasn’t worried,” UCLA senior pitcher, Ally Carda said.

The third inning changed everything for the Bruins, as Two back-to-back home runs from UCLA (Carda then catcher Stephany LaRosa), a base hit, a batter hit by a pitch and another home run (third baseman Mysha Sataraka) opened up the game. Now 5-1 Bruins, CSUN would have a long way to go if they were going to come back.

“In the heat of the game it’s you see somebody and you try and go for the outs,” said CSUN head coach Tairia Flowers.  “I told the girls, ‘Be aggressive; get as many outs as you can on every play’ and it didn’t work in our favor that time.”

The fourth inning started with a single from shortstop Delaney Spaulding, followed by a single from center fielder Allexis Bennett. With no outs and runners on first and second, Carda came up to bat.  Spaulding took too big of a lead off of second, so Hooper threw, behind the runner, and Spaulding stole third. The next pitch, Bennett took second without a throw from Hooper.

“Yeah a couple stolen bases here and there but I don’t think that’s what made or break the game, but you don’t know what you can do until you try it,” said Flowers.

Now with runners on second and third, Carda sends a line drive to center bringing in both runs. After a CSUN error, Carda took second. With a runner on second first baseman Maddy Jelenicki grounds out to third, but a CSUN error gives her the free base. Then left fielder Gabrielle Maurice steps up to the plate and lines one to right, scoring one and putting runners on second and third. Sataraka steps in the box and sends a sacrifice fly to right field to score the ninth and final run for UCLA.

“We have to have the same focus and intensity throughout the entire game. I think we started to swing at balls and started getting a little passive at the plate and I just told them ‘If good things are going to happen we need to be aggressive and still play our game’” said Flowers.

The Matadors could not answer back in the fifth.  Lead off pinch hitter, Marisa Schwartz popped up to short, followed by a strike out from designated player senior Jordan Sauceda. Then sophomore center fielder Taylor Glover got on with a single to center, which offered a glimmer of hope for CSUN; who only needed one run to keep playing. Hooper then came to the plate and grounded out to deep short, cutting loose that little bit of hope remaining.

Flowers reminded her players that the feeling they had in the beginning of the game is one they need to carry through to the end, because that is how they would be victorious.

“You were in control at the very beginning and that’s how you have to feel and play and attack every single inning throughout the rest of this tournament.”

The Matadors return to Easton Stadium tomorrow at 2:30 p.m. to take on San Diego State.