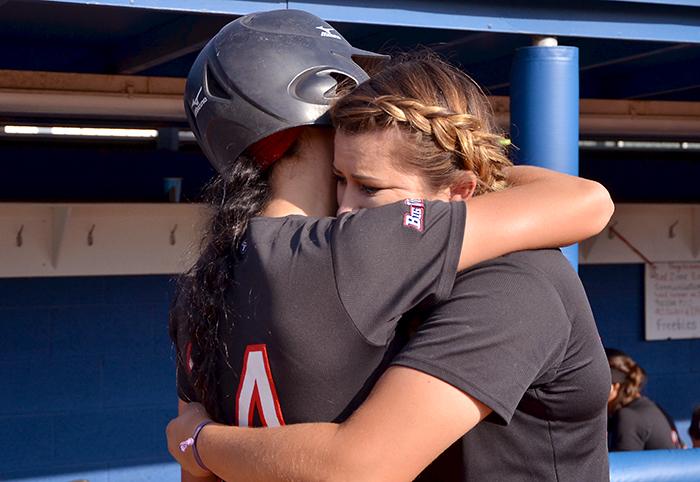 Senior Briana Elder and sophomore Nate Taylor console each other after the loss and elimination from the 2015 NCAA softball tournament by a final score of 5-4 to San Diego State University at Easton Stadium in Los Angeles, Calif., on Sat. May 16, 2015. (Raul Martinez/ The Sundial)

After seven close innings, the Matadors’ season came to an end.

In their second game of the NCAA Tournament, CSUN lost 5-4 to the San Diego State University Aztecs.

“It was definitely a battle out there. Both teams played extremely well, made some good plays defensively and came up with some clutch hits,”said CSUN head coach Tairia Flowers. “So hats off to San Diego State for pulling it off in the end, but I’m extremely proud of these girls and what this team did.”

After scoring first it seemed the Matadors would remain with the upper hand. An RBI in the top of the third gave CSUN another run, but the bottom of the third was all about the Aztecs.

An error and home run gave SDSU four runs, putting them ahead by two.

In the top of the fourth inning, sophomore outfielder Carissa Sherman executed a suicide squeeze and scored senior outfielder Kaitlin Toerner from third, bringing the Aztec lead to one. The Matadors were then able to load the bases, but could not bring any more runs across the plate.

With two down and nobody on in the top of the fifth, pinch hitter freshman catcher Cortney Horne hit a home run over the left field fence tying the game at four.

“I wasn’t really swinging for the fence, just trying to get a base hit,” said Horne.

SDSU had bases loaded no outs in the sixth. A fly ball was hit to Toerner who caught and immediately fired the ball home to sophomore catcher Katie Hooper for a double play.

“It was like my first time ever making that play before and the rush of emotions was amazing and I knew that once (Toerner) caught the ball she was gonna throw it in and we were going to make a great play together,” said Hooper.

The Matador defense was able to hold tight after that, but still allowed one run to score.

“I just told them to stay loose, keep playing the game that they’ve played their entire lives and don’t make it bigger than it is, but to be ready for the ball and Zoe lets go right at the batters,” Flowers said.

Freshman infielder Savannah Horvath started the seventh inning for the Matadors with a strikeout, followed by a base hit from Hooper. Junior utility player Ariana Wassamer came up next, hitting a shot against the fence where SDSU’s center fielder jumped and barely made the catch to get the second out of the final inning. Maylynn Mitchell came up next and got hit by a pitch to put runners on first and second with two down. Horne stepped up to the plate, only to strike out on a 3-2 count ending the game and season for the Matadors.

“Game on the line, I was just trying to be patient and stay within myself,” Horne said. “I swung at a bad pitch. There’s nothing really else.”

It wasn’t just players and coaches that felt this loss, family and fans of the team took it hard as well.

“The hardest part is not so much the loss,” fan and father to pitcher Zoe Conley, James Conley said. “The hardest part is to see all the hard work that the young ladies put into it and just coming up a bit short. The way they came together as a team, friends and family. For them to come up a little bit short; it’s just painful.”

“We did a lot of things that haven’t been done for a long time,” Flowers said. “These guys worked hard to do that and get to where they are today. And for these guys who are so young and are returning, they got better and I think that that’s an important part of your journey is making sure that you’re just not staying in the same place and they’ve grown as people and as players and as teammates and how to approach each other and what to do on the field.”

This also marked the first time CSUN returned to the NCAA Tournament since 2007.

The season may be over, but James has big plans for his team next season.

“We have a lot to look forward to for next year, so we’re going to build on this one and come back even better,” he said. “So I expect to see us not only at this position next year, but one step further: College World Series.”