The Road to Recovery: Sports Injuries 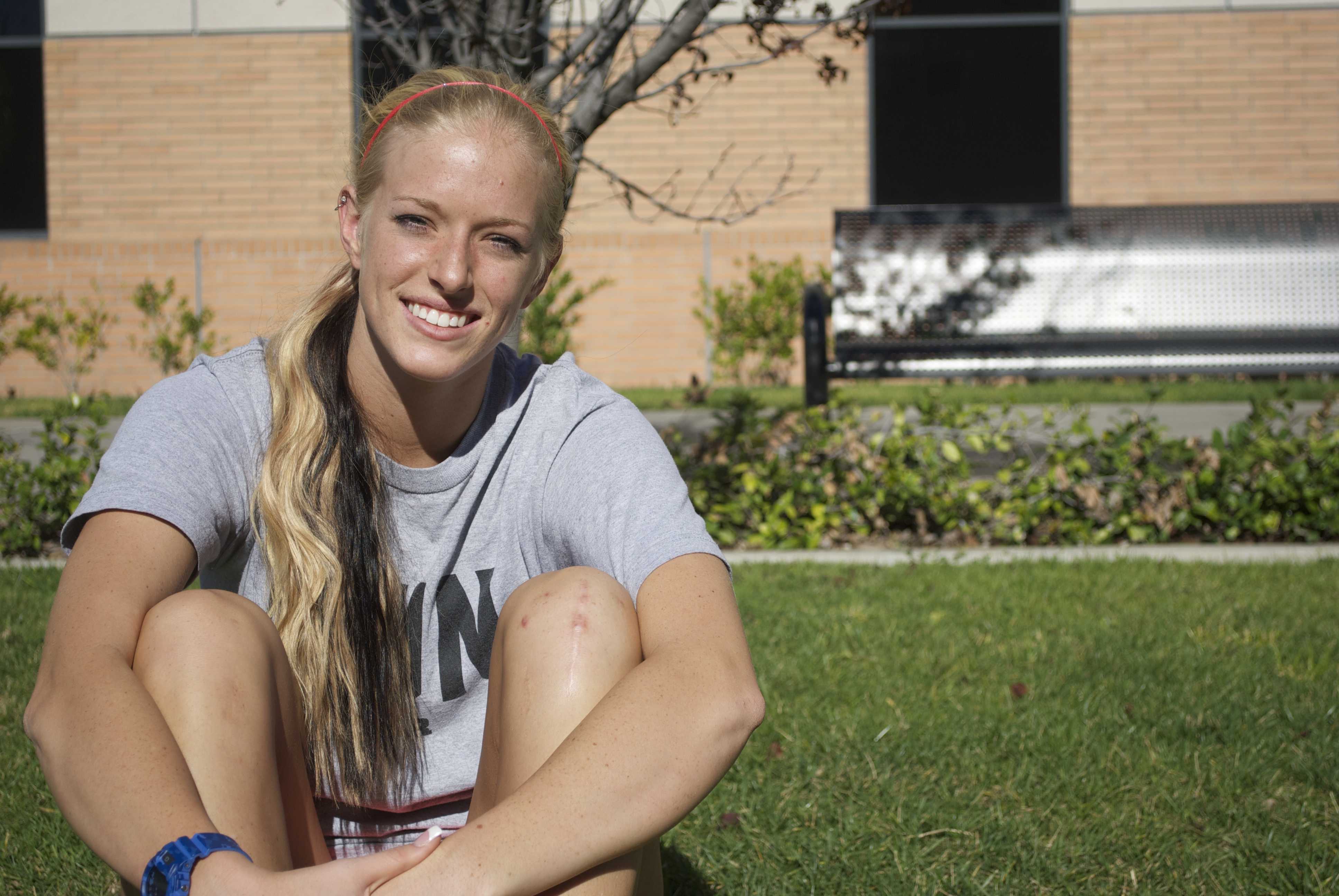 22-year-old senior Rachel Webb, a member of the women’s soccer team at CSUN, was playing in a California Interscholastic Federation tournament semifinal game in March of 2011 the first time she tore her anterior crucial ligament in her left knee, when she was a captain in her senior year at Quartz Hill High School.

Webb attempted to make a cut, a popular move in soccer used for evading a defender. It’s a move that relies on misdirection and planting the foot down in a quick motion in order to control the ball. When Webb’s cleat got stuck in the turf she felt her knee give out from underneath her.

“When it happened it was really loud, it was obnoxiously loud,” Webb, who majors in honors psychology with a minor in political science said. “We were on a football field and the ref was standing at the 50-yard line and I was maybe at the 20. You could hear the pop, everybody heard it.”

Webb remembers that she stood up right away and tried to walk and jog the injury off but her knee wouldn’t hold up. Both she and her coach at the time hoped for the best after the game which the team went on to lose.

“We really were sure for at least a week that it wasn’t as bad as it was until I had the MRI then we realized what had happened,” Webb said.

Going into college, Webb was a part of two groups that were more susceptible to ACL injuries, which helps hold the femur to the tibia. Those two groups were those who had already suffered an ACL tear and women, who, according to an article published by the American Association of Orthopedic Surgeons and written by Timothy E. Hewett, are two to 10 times more likely than men to experience a knee ligament injury.

When Webb tore her ACL in high school she also tore her meniscus (cartilage in the knee which helps to create stability) and “chipped some bone” off of her femur. It took her eight months to recover and during that time she was recruited, despite her injury, to come play at CSUN by Keith West, the head coach of the women’s soccer team. But that following spring Webb had more complications, this time with her foot.

“Over time it was getting worse and worse and then a teammate hit it and then it just broke a side of my foot,” Webb said.

What Webb experienced was a Jones fracture – a break that occurs near the middle of the foot – and was sidelined for a few months. But the more difficult challenges came when she injured the ACL in her other knee (her right knee). She attributed the second ACL tear to a misstep and exhaustion.

“I was out on the field just practicing with a couple other teammates and Webb, though, was able to find a sort of silver lining in her otherwise unfortunate last few years., it was really just mostly fatigue I think, I was just so exhausted from everything we’d been doing,” Webb said. “We were scrimmaging we were doing a couple drills and I got shoved off the ball weird and I stepped badly.”

Webb’s current injury came a year after the second. In the middle of summer last year she and her teammates were practicing during what she called a “triple day,” a day in which there are three different practices in one day. Fatigue was a factor again. They were on their last practice of the day. She made a cut and tore the ACL in her left knee again. The first game of the season was the next day.

“I knew right away, obviously, after two you kind of know when it happens,” Webb said.

Webb is around five months away from the end of the recovery process for her current injury. According to the University of Minnesota’s Sports Medicine Institute, that process – which can be difficult for athletes when considering their competitiveness and their need to be with their teammates – can take upwards of nine months.

“Regardless of me not playing I’m still competitive and I still want to push myself so I started running about three and a half months this time,” Webb said.

During that time the athlete moves from activity to activity which range from the smallest movements (like placing their injured leg on a table by the strength of that leg alone) to physical contact which comes at the end of their recovery.

Timetables are personal. According to the University of Minnesota’s article, an athlete is able to return to their sport after five to seven months of rehabilitation.

“If you want to be able to run around with your kids and all that, it’s just a lot of discipline on your part,” Webb said of the recovery process. “You have to rehab every single day, you have to eat healthy because you can’t get too out of shape or it’s really hard for your body to come back to what it was.”

In a case study published by the National Institutes of Health Siobhain McArdle, found that the negative psychological effects that follow an injury are “amplified in cases of traumatic injury” like ACL tears.

“I cannot even tell you how much of a different place I’m in because of it,” Webb said of her injuries. “You get an unbelievable amount of appreciation for touching the ball, for any kind of working out, for the relationships with your team.”

Webb, though, was able to find a sort of silver lining in her otherwise unfortunate last few years.

“It’s crazy because you’re so negative in the moment like ‘why me, why me?’ Webb said. “But those questions just drive you crazy. You can’t ask yourself ‘why’ and you just have to say ‘now what?’ The last couple of injuries was just learning how to take things for what they are and making the most of them.”