NHL On the Ice: Five X-Factors of the Stanley Cup Final 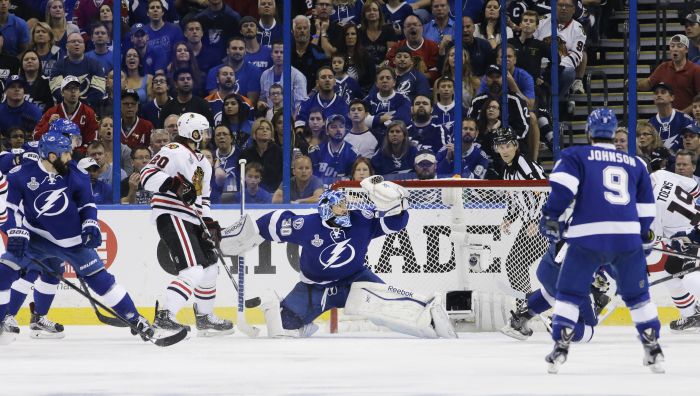 Tampa Bay Lightning goalie Ben Bishop, middle, makes a save on a shot by the Chicago Blackhawks' Patrick Kane (88) in the first period in Game 1 of the Stanley Cup Final at Amalie Arena in Tampa, Fla., on Wednesday, June 3, 2015. (Dirk Shadd/Tampa Bay Times/TNS)

Jonathan Toews and Patrick Kane are two of the most dynamic players in the NHL, so in a must win game six of the Western Conference Finals, head coach Joel Quenneville reunited the two superstars as line-mates. It’s like they had not missed a step because this reunion did not disappoint, producing nine points in the final two games of the series. In game seven Toews scored two goals while Kane collected three assists. This duo has already won two Stanley Cups together and heading into this Stanley Cup Final they are scorching hot as line-mates. The Blackhawks feed off of the two-way play of the guy they call ‘Captain Serious’, Toews nickname, and also Kane’s unparalleled playmaking ability, so if they start rolling it’s advantage Blackhawks.

Who can say they went head to head beating the soon-to-be league MVP goalie Carey Price, and also beating the future Hall-of-Fame goalie Henrik Lundqvist on his home-ice in Madison Square Garden in a game seven situation? Only one person and his name is Ben Bishop. Yes, Bishop wasn’t scoring goals against Lundqvist himself, but he sure was stopping whole bunch of pucks on his end. Bishop not only defeated the “King”, he shutout the New York Rangers and other than the Stanley Cup Finals series, what other venue or situation is more intense then what Bishop just endured? The two goalies left in this Final are not considered great, but Bishop at 28-years-old is entering the Finals with confidence as the better goalie and he must play like it.

If the playoffs ended today the Conn Smythe winner, MVP of the playoffs, would undoubtedly go to defenceman Duncan Keith. He leads all playoff skaters in plus-minus (+13) and minutes on the ice (537:04 total ice time). He also leads all defenceman in points (18), assists (16), ice time per-game, and game-winning goals (2). As you noticed, Keith has a lot of mileage during these playoffs, but there is no indication of him slowing down. A dominant blue liner like Keith is hard to come by and his presence surely gives the Blackhawks more insurance. His speed, stick skills, defensive prowess and playmaking ability from the blue line will have an effect on the outcome of the series, so the Lightning must find ways to neutralize him in certain areas.

Yes, Steven Stamkos is the Lightning’s star player and top offensive threat, but the Lightning’s best line of these playoffs has certainly been the line nicknamed the “Triplets”, consisting of 24-year-old Tyler Johnson, 21-year-old Nikita Kucherov and 24-year-old Ondrej Palat. Each of these players are in the top-12 in playoff points and as a collective line they have a total of 55 points. This young line cannot shy away from the Finals stage because their production is not bonus contribution, it’s a necessity. If they’re as active as they’ve been in this series like they were in the first three, then the Lightning have a great opportunity to hoist the Stanley Cup.

Five Conference Finals appearances since 2009, three straight in particular, and with this being his third Stanley Cup Finals appearance in six years, Quenneville’s resume with the Blackhawks is putting him in all-time great company. This is exactly why he ultimately gives them the advantage ahead of this matchup against the Lightning. Quenneville is not afraid to make adjustments, in what can be seen as dire situations, and his awareness of knowing his lines inside-and-out makes his adjustments that more special. Moving Patrick Kane back with Jonathan Toews, putting a veteran like Patrick Sharp with young guys and even substituting goalie Corey Crawford for Scott Darling in round one shows his coaching brilliance. Quenneville will do more of the same, which is why he’s the Blackhawks most important factor.