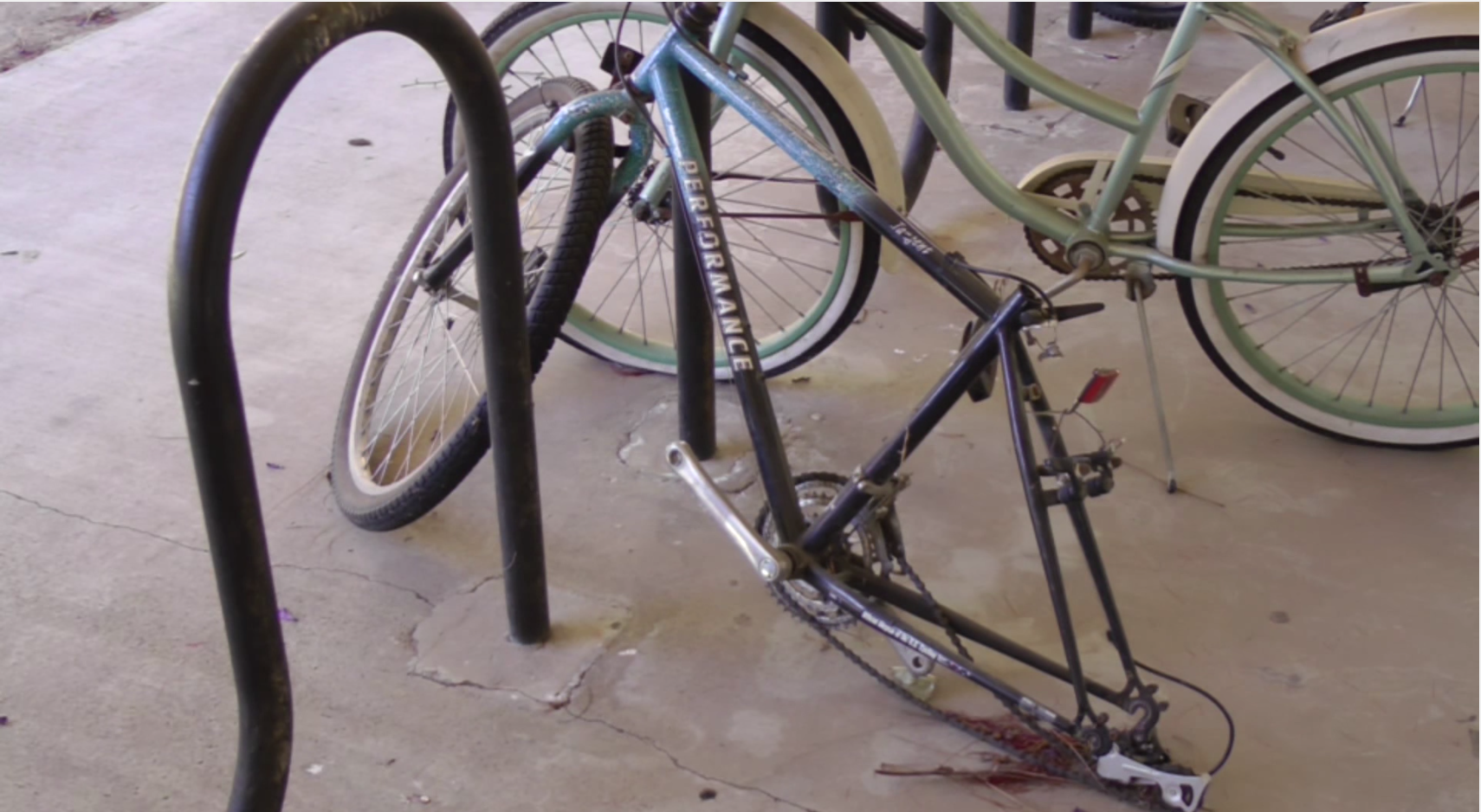 The Number of Bike Thefts At CSUN

Old bikes that have been stripped of their parts litter almost every bicycle rack at Cal State University Northridge. Bicycle theft has become such a common occurrence on campus that most people pay no mind to the many piles of old tires and empty frames they see every day when heading to class.

However, crimes rates reveal just how serious the problem is.

Bike thefts are one of the highest committed crimes on CSUN’s campus. Campus crime logs reveal a total of 103 bike theft incidents occurred between Apr. 1, 2014 to Apr 1, 2015, a span of exactly one year. Out of all of the incidents that occurred only one arrest was made and only two bikes were recovered.

Dividing the campus into five sections reveals another stark detail. Most of the thefts occurred in five quadrants around the campus: the northwest, the northeast, the southwest, the southeast and the far north.

The data reveals most bikes had been stolen in Zone Five, or the far north end of the school near the University Park Apartments.

CSUN junior year student Terryeon Robinson says he’s been told that bicycles thefts are a common problem at the dormitories. Robinson was told by his leasing consultant “to make sure to secure [his] bike because a lot of them come up missing.”

Research also shows that a total of 49 bikes thefts had occurred in the UPA sections. Most of the bikes in the area were reported stolen on the UPA bicycle compound 15, UPA 17, and UPA 8.

Zone Two consists of the Matador Bookstore, Chaparral Hall, Live Oak, USU, Eucalyptus Hall and the G3 Parking Lot structure. Research suggests that a total of 15 bikes had been reported stolen in this zone. Six of those 15 were reported stolen next to Eucalyptus Hall. Three bikes were stolen from Live Oak and another three were stolen from the USU.

Research suggests that some bike thefts had occurred in the morning hours as opposed to late at night. On Sept. 24, 2014, a bike was stolen at 9:11 a.m. in Zone Five.

The synopsis reports “an unknown suspect stole the victims bicycle that he had secured to the bicycle rack outside of UPA 12.”

The investigation was never cleared. This is one of many examples of bikes being stolen in the early morning hours.

The majority of bike thefts occurred in the late afternoon to early evening hours. On Dec. 3, 2014 at 5:29 p.m., a synopsis states that, “an unknown suspect had stole the victims bicycle that she had secured in the bicycle lot outside.”

On Mar. 23, 2015 at 10:23 p.m., an unknown suspect had stolen a victim’s bicycle that he had secured near the Oviatt Library. Research shows that a majority of the bikes had been stolen, regardless of what type of lock they used.

A report shows that on Mar. 5, 2015, at 7:14 a.m. an unknown suspect stole a bicycle from a bicycle rack severed with a small paper lock.

Data shows that most of the bikes that were stolen had cable locks to secure their bikes.

“To prevent the theft of certain components and accessories you can get smaller cable locks that lock to your main lock and your component. You can also get special locking hardware, bolts and nuts, that make it harder for people to steal components from your bike,” bicycle mechanic Matt Maceda said.

Research shows that out of the 103 bikes that were reported stolen, only two had actually been recovered. A disposition dated on Apr. 7, 2014 showed that there had only been one arrest by CSUN police officers after one man admitted to stealing a bike.

“There are certain areas that are missing bike racks. There’s Monterey Hall that no one really goes to, but I go to a lot. They had a bike rack that was really old and rusty and it just disappeared. Now I have to use a cable to lock my bike around a tree and it’s not that safe,” Gonzalez said.

Though there are many unsecure racks throughout campus Gonzalez said the school has made a small initiative to try and improve the situation.

Special racks like the ones located adjacent to Sierra Tower are an invention of a former CSUN engineering student, and are designed to allow more efficient security of bicycles. The rack allows the frame and the tire to be secured together against the rack with most types of u-locks.

However, more needs to be done in order to ensure students that biking can still be considered an efficient way to commute to campus. For now, students should be sure to lock their tire and frame to racks and use a u-lock whenever possible.