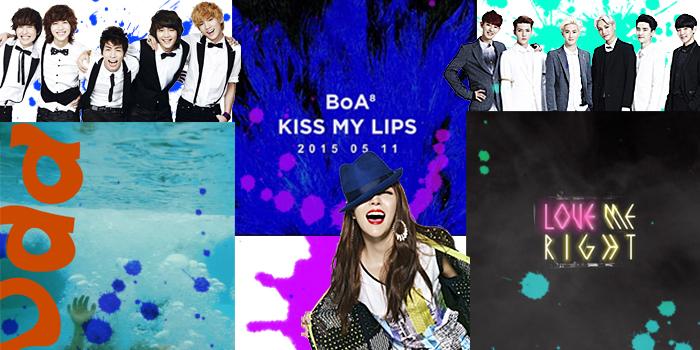 From left, SHINee's "ODD," BoA's "Kiss My Lips," and EXO's "Love Me Right." All of these artists made their Korean comebacks in May and June 2015. Photo credit: Alyson Burton

K-pop, known as Korean pop, is a musical genre that originated in South Korea. Now the genre is quickly rising through the music scene and several world music charts.

Three powerhouse K-pop artists from Korean based entertainment company SM Entertainment are BoA, and male groups, SHINee and EXO. These groups have enjoyed the fame and recognition of success these past two months.

According to Billboard, in 2014, the Korean sub-unit of twelve member guy group EXO, EXO-K’s music video for “Overdose” racked up millions of views. It has become the most watched K-pop video in the U.S. and around the world.

BoA recently made her latest Korean comeback after two years of promoting in Japan. Her album “Kiss My Lips,” displays her cool-collected and funky sound.

BoA debuted back in 2000 and released albums in the Korean, Japanese and American market. This comeback was an anniversary release, with her name on all production credits of the songs and complete creation of six songs on the album. The artist shows why she’s known as the Queen of K-pop.

The overall feel of her album and title track “Kiss My Lips” displays electric vibes and subtle guitar chords. Her soft voice makes for a relaxing and seductive tune.

BoA’s bubbly and youthful voice is heard on second title track “Who Are You [feat. Gaeko],”and gives a cool vibe with the guitar in the background. She channels singer Kylie Minogue on her tune “Shattered,” with the haunting sound and subtle beat in the background, taking a dark turn with the funky rhythm.

“Smash,” a funky 70’s sounded track, becomes a favorite on the album. It’s a catchy dance tune with vibrancy of brass, some funky guitar and a powerful disco-vibed sound.

The well-known R&B group surprised fans with their experimentation in sound. This seems to be this year’s SM trend in funky rhythms.

Their comeback with title track “View” starts with a light rhythm and delves into quite the smooth dance track when the chorus hits. It’s an easy-going rhythm and laid-back sound throughout the entire album.

They continue their laid-back sensual rhythm and smooth vocals in “Odd Eye.” Members Onew, Jonghyun and Taemin’s high notes take listeners back to their R&B roots and it shows the talent of member Jonghyun.

The beginning of “Trigger” sounds like an EXO song from their debut days, but it transforms to the R&B sound SHINee’s known for with the xylophone rings and synthesizers.

“An Ode To You” sounds like the lead song of an Asian drama, with the string and piano driven ballad, along with the boys’ falsettos and light instrumental to slow down the mood of the album.

“Alive” is branded as the hip song of the album. It starts with the upbeat chant “live, live,” and continues with strong synthesized beats. Rappers Minho and Key steal the stong with the bridge and create a ferocity that isn’t heard throughout the album.

EXO makes another comeback in less than two months after “Call Me Baby,” with their repackaged “EXODUS” album titled “Love Me Right.”

“Love Me Right” much like “Call Me Baby” has an addictive and catchy chorus. It displays a funky rhythm filled with bits of brass, disco sound and the strong harmonization of the group as a whole. The beat is reminiscent of the late 70’s to mid 80’s music. It sounds similar to the band New Kids On The Block and a little of Michael Jackson.

“EXO 2014,” also known as their concert hit “Promise,” is composed by member Lay and written by Chen and Chanyeol for their fans, after two members left the group last year.

The song in Korean and Chinese sounds slower. It starts with piano and strings leading into a soft bass. It sounds like a throwback song, with a repetitive chorus, upbeat and electric sound.

The piano-led song, “First Love,” showcases member Baekhyun’s strong vocal power and the subtle improvements of all the vocalists in the Korean version. The Chinese version shows the underrepresented vocals of Chinese members.