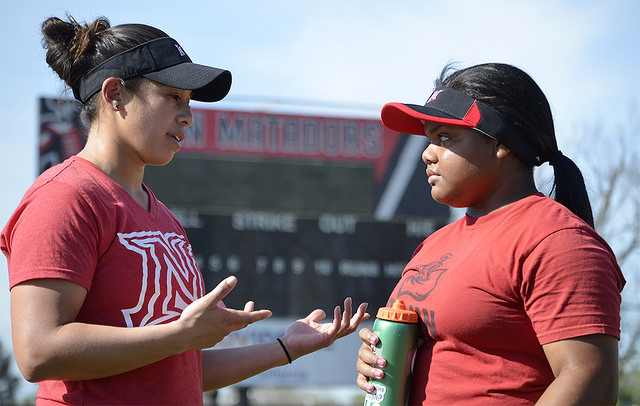 CSUN freshman softball pitcher, Zoe Conley, was named an alternate for the USA Junior Women’s National Team according to a press release by CSUN Athletics and USA Softball on Monday.

The reigning 2015 Big West Freshman Pitcher of the Year and First Team National Fastpitch Coaches Association [NFCA] All-West Region honoree has been added to the USA Softball Junior National Team as an alternate. She will be under the tutelage of CSUN softball head coach Tairia Flowers, who is the Junior National Team head coach. The team prepares in Oklahoma City for two international tournaments over the summer.

Conley’s 19-7, 1.84 ERA, 134 strikeouts in 156.1 innings, coupled with opponents batting average of .229 helped see her finish 30th among all eligible Division I pitchers. That level of play helped form a dominant 1-2 pitching combination with graduated senior Brianna Elder as the matadors went 41-17 en route to a Big West Conference championship and NCAA Tournament appearance.

In her freshman season, the Berkeley, Calif., native became the first CSUN pitcher to earn First Team NFCA All-West Region honors since Amy Windmiller received the honors in the 1994 season.

Conley won three Big West Pitcher of the Week honors, was named one of 25 finalists for the NFCA Freshman of the Year, and recorded a career-high 16 strikeouts and tossed CSUN’s first no-hitter since 2008 in a victory over Utah Valley. Conley lead the Big West conference with eight shutouts, which tied her for 21st among all eligible pitchers in Division I.

Training camp at the ASA Hall of Fame Complex began Sunday June, 7 in Oklahoma City with the Junior team practicing with the National Team throughout the week in scrimmages, JWNT will engage in two scrimmages against local ASA/USA 18U teams on Tuesday and Wednesday. Another scrimmage will take place on Thursday night against the Women’s National Team at OGE Energy Field that is open to the public, according to USA Softball.

After the World Cup, the JWNT will compete in the WBSC Junior Women’s World Championship [JWW)], August 9-15 in Oklahoma City, Okla., at the ASA Hall of Fame Complex.