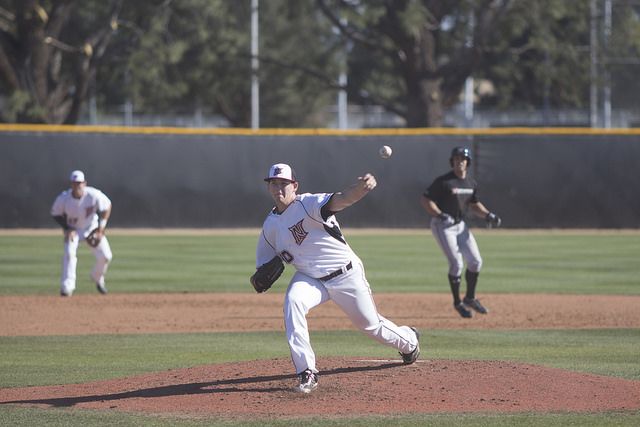 Newly drafted pitcher Jerry Keel joins the 92 other CSUN alumni that have been taken in the MLB Draft. Photo credit: Trevor Stamp

Senior pitcher Jerry Keel was drafted by the San Diego Padres, 267th overall in the ninth round of the 2015 MLB Draft, making him the highest drafted Matador since the Toronto Blue Jays selected Brian Slover in the eighth round in 2009.

Keel’s selection makes it 11 straight years that a CSUN player has been taken in the MLB Draft.

“It was a bit of a relief because Jerry is getting a very good chance at professional baseball,” CSUN baseball head coach Gregory Moore said after witnessing Keel get drafted. “I knew Jerry would be drafted and I was hoping that a team would take him in a round that would give him an opportunity to make his mark in pro ball and that happened today and that’s the most exciting part.”

CSUN baseball’s resurgence was partly due to the play of the 6’6 lefty as the Matadors won 33 games, the most since 2002.

“I can’t speak highly enough of Jerry as a person and as a competitor on the field,” Moore said. “I think student athletes that have a draft to consider can learn a lot from Jerry as he is an example of going the slow, steady route, signing at the right time and not just signing at the first so I think we’ll learn a lot from the way Jerry’s gone about it.”

Keel finished his senior campaign with record of 5-7 with a 2.66 ERA in 14 starts. He struck out a career-high 80 batters this season and surrendered a .235 opponent batting average and threw six or more innings in 11 of 14 starts.

“I was really anxious and I just wanted to get it over with,” Keel said about being drafted. “I wasn’t getting my hopes up or anything like that. I couldn’t believe it but was so happy it happened.”

Like all draftees, Keel will now undergo standard post-draft routines.

“I’m going to leave for Arizona on Friday to go to their spring training facility and I’ll do a minicamp for two to three days,” Keel said. “Then I’ll go out to their short season A in Washington.”

Being drafted by the Padres had addeds perks as well as sentimental value for Keel.

“I’m super excited,” he said. “To hopefully be able to play one day in southern California where I was born and raised would be awesome.”

The Palmdale, Calif. native earned Big West Conference Freshman of the Year and Freshman All-American honors in 2012 by earning six wins, a 2.07 ERA and a pair of complete games.

In his sophomore season Keel earned Big West Conference Honorable Mention with a career-high seven wins, 2.59 ERA. During his junior season, Keel logged 94 innings, the most in his career, with 72 strikeouts and a 3.64 ERA.

“It’s been a great experience being able to learn from so many different people throughout my career and turning into who I am as a player and who I was as a student,” Keel said.

The sociology major threw 90 or more innings all four years at CSUN and has pitched the most innings in school history with 370.1. He is eighth in CSUN history with a 2.75 career ERA in addition to 18 wins and six complete games.