Baseball: Calvin Copping drafted by Washington Nationals in 25th round of 2015 MLB Draft 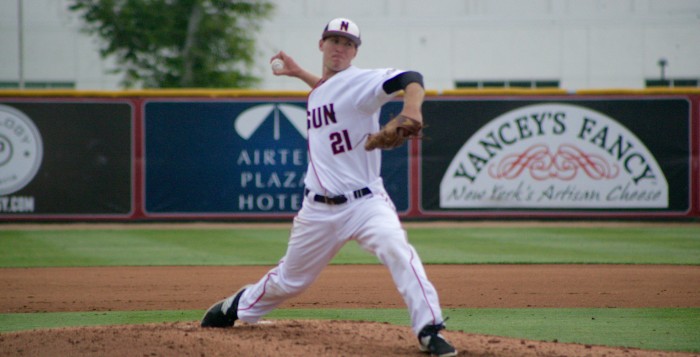 Junior pitcher Calvin Copping will forego his senior year at CSUN after the Washington Nationals drafted him 764th overall in the 25th round.

The right-hander had a career-high six wins, 86 strikeouts in 88.2 innings pitched. Copping had a career-low 3.05 ERA with 14 games started in 15 appearances.

“It’s a good feeling getting your name called,” Copping said. “We were listening to it on MLB network online.”

Copping leaves CSUN with a year of eligibility left.

“I’m going to stick with it because that’s always been my dream, to go out and play pro ball, so that’s what I want to do,” Copping said about wanting to sign with the Nationals.

Copping allowed a .249 average to opposing hitters and pitched the most innings against conference opponents with 48.1 in addition to having pitched two complete games to his credit.

“It says a lot about CSUN, San Fernando Valley baseball and it speaks highly of the conference we’re in and the region,” CSUN baseball head coach Gregory Moore said about CSUN players being drafted in the MLB Draft for 11 consecutive years. “Southern California baseball is as rich as it gets for baseball talent and that streak represents that.”