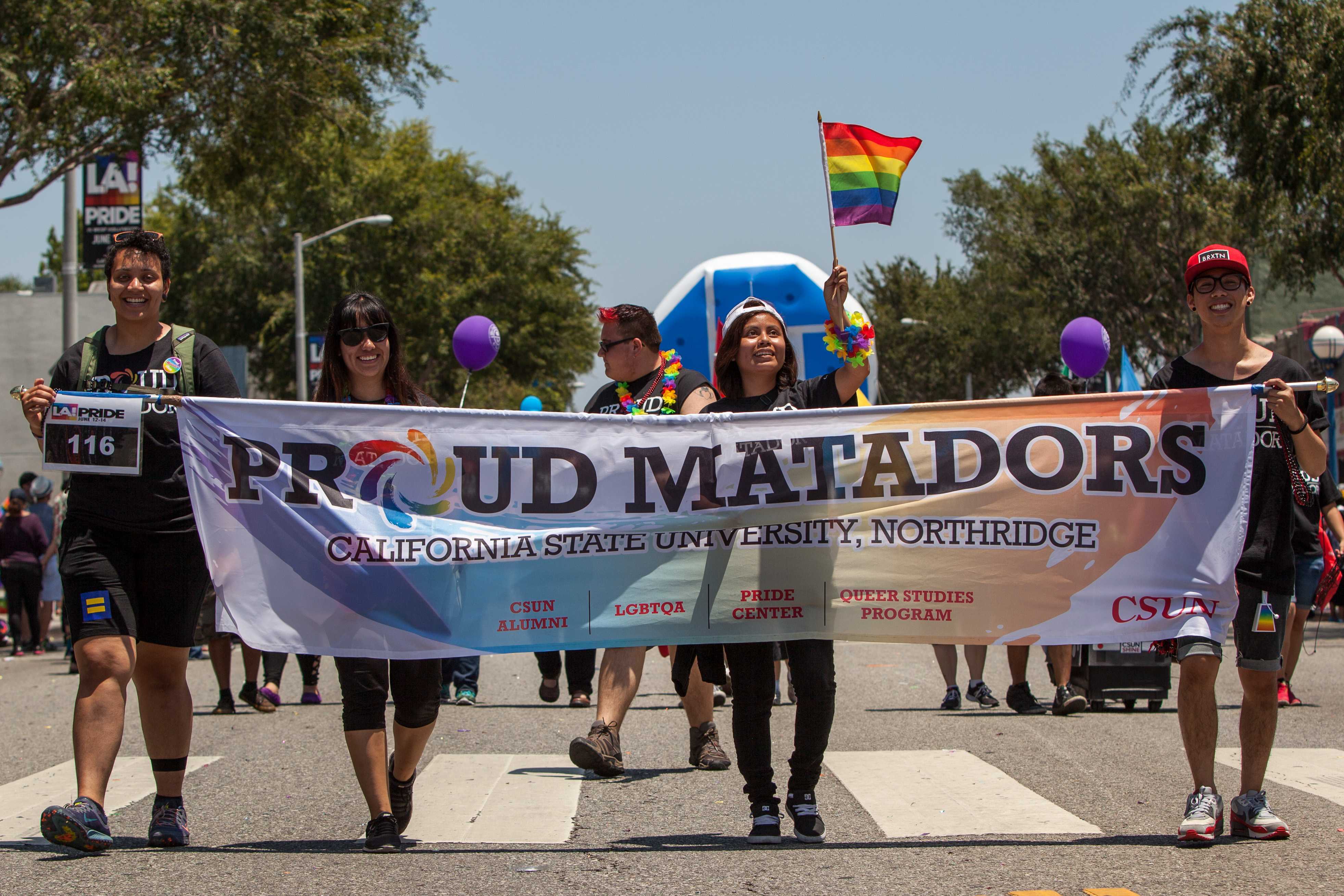 People from all over Southern California and the nation lined the streets of the parade to watch a variety of companies, non-profit organizations and other floats march by. Many of the parade participants have beads and noise makers to hand out. Some have stickers and the floats range from simple trucks to huge double decker trucks with thumping music that gets the crowd moving.

On Sunday June 14, 2015, CSUN LGBTQA students, employees and alumni came together to participate and march in this years Los Angeles PRIDE parade.

Harrison, who works in the University Student Union, was invited to march in the parade by the CSUN Pride Center Coordinator, Sarina Loeb. This is Harrison’s first time attending a PRIDE event.

Los Angeles PRIDE started in the 1970s as a means of commemorating and celebrating the anniversary of the riots at the Stonewall Inn, in New York, which launched the current LGBTQA movement.

The event draws hundreds of thousands of people to West Hollywood each year. This year, an estimated 400,000 people attended.

Rosa Rodriguez, broadcast journalism student, participated in her first PRIDE parade this year as part of the Pride Center team.

“I’m excited. It’s very colorful,” Rodriguez said. “I’ve never been to one and it’s nice to not just watch, but to be a part of it. It’s really fun and everyone is really excited and hyped up so that makes me excited.”

The Pride Center, which was previously located next to the Veterans’ Center has relocated to a new space in the USU that should be finished by the beginning of the fall semester.

Rodriguez said CSUN is an inclusive and diverse campus.

“I think [CSUN is] better than I would say most other campuses, especially across the country, whereas maybe they’re not very friendly to the LGBTQ Community,” Rodriguez. “They have a lot of resources and people. They can go in and ask about the peer mentor programs and just meet people and make friends.”

Jarred Gonzaga, attended his fourth PRIDE celebration and this was his first with CSUN.

“I love that we actually have a contingent that comes out, because I know a lot of schools don’t,” Gonzaga said. “CSUN does and the fact that we have representation for the queer community is a great thing. I love how our university is taking initiative on being inclusive and being a lot more open minded and diverse.”

CSUN Pride Center members marched down Santa Monica Blvd. and cheers of “CSUN” were heard along the route, spurring those marching in the hot sun to keep their energy levels up.

“The Pride Center is like my bat-cave,” Quiroz said. “I go there during my classes and do my homework there. I use the resources that they have and go to their weekly events and their monthly events like karaoke night.”

The Pride Center is located in the University Student Union.