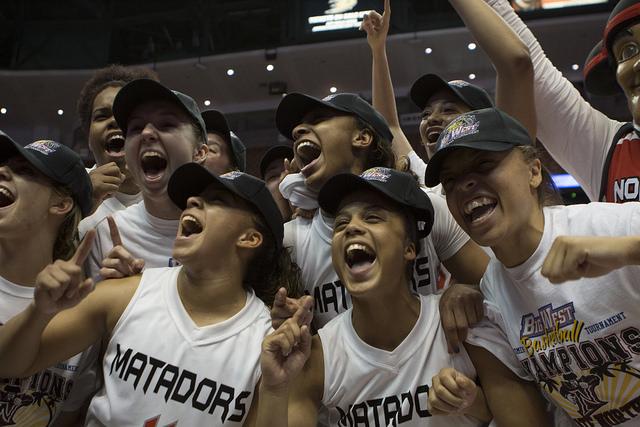 The National Collegiate Athletic Association announced Friday that indoor and outdoor track and field student-athlete Olympia Jewett and all-time scoring Ashlee Guay as nominees for the 2015 Woman of the Year Award.

The award is in it’s twenty-fifth year and honors graduating female college athletes who have exhausted their eligibility and distinguished themselves throughout their collegiate careers in academics, athletics, service and leadership. The 480 nominees are the most in the history of the award.

“Realizing that I had to make sacrifices for the team came quickly, but being able to represent something bigger than myself was the best feeling,” Guay said in her personal statement. “Putting on that jersey, playing for the name on my chest and inspiring others, is a feeling I will never forget.”

Guay left the CSUN and Big West record books near the top in points scored, steals, assists and games played.

“When I came to college to compete in track and field, the goal was not to just succeed at my sport,” Jewett said about the importance of being a well-rounded student-athlete in her personal statement. “I was determined to get a higher education and reach out to as many people as I could.”

The NCAA encourages it’s member schools to honor its top graduating female student-athletes each year by submitting their names for consideration for the Woman of the Year Award. Respective conferences assess nominee eligibility and select up to two conference nominees.

The NCAA Committee on Women’s Athletics then chooses from from those nine to determine the 2015 NCAA Woman of the Year.

The 2015 NCAA Woman of the Year winner will be announced, along with the top-30 honorees celebrated at the annual award ceremony Oct. 18 in Indianapolis. The full list is available here and the NCAA’s release here.