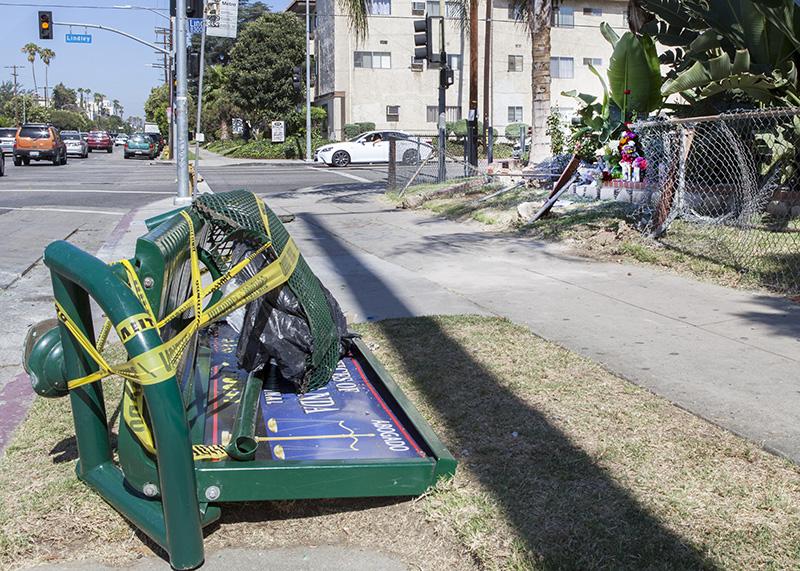 A damaged bus bench at the corner of Lindley Avenue and Roscoe Boulevard on the morning of Monday June 22, 2015. In the background is the memorial for Desirae Crittenden, 19, a CSUN Student who died at the scene. Photo credit: Matt Rose

According to the LAPD Valley Traffic Division, the incident took place Sunday around 3:30 a.m. when a Honda Civic traveling eastbound on Roscoe Boulevard crashed into the driver side of a Ford Mustang traveling northbound on Lindley Avenue.

The 21-year-old driver of the Civic was arrested on suspicion of driving under the influence.

“The driver of the Honda Civic…we are focusing on that individual as we speak to determine suspected level of impairment,” LAPD Detective William Bustos said in a phone interview.

Five people were transported to the hospital Sunday morning. On Monday, one of the four passengers in the Civic was confirmed dead, according to Bustos. The passenger in the Mustang survived.

“The right front passenger was transported to a local hospital and unfortunately the driver of the Mustang died at the scene,” according to Bustos.

Police have confirmed that one of the drivers did not stop at the intersection’s red light but did not comment on which car ran through the red light.

A roadside memorial is set up at the location of the crash. Friends and family members placed flowers, candles and messages for Crittenden.