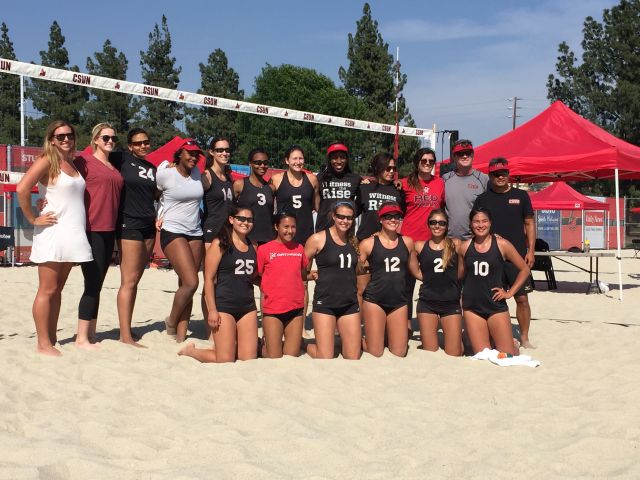 CSUN Sand Volleyball will be the 17th sport sponsred by the Big West in the 2015-2016 season and will compete in conference play in only it's third season of existence. Photo credit: Thomas Gallegos

The Big West Conference announced in a press release that sand volleyball will be added as the conference’s 17th sponsored sport on Friday.

CSUN Sand Volleyball will only be in it’s third season of existence. The team will play Cal Poly, Hawai’i, Long Beach State, and associate members CSU Bakersfield and Sacramento State for the conference’s inaugural championship beginning in 2015-2016 season. This gives the league the minimum six teams required for postseason NCAA automatic qualification.

The Matadors finished this past season with a 3-8 record with a roster that included most of the women’s indoor volleyball team.

The sand volleyball team’s home games had major fan support from the CSUN community and other student athletes.

“I have been very happy and excited about the development of sand volleyball at CSUN, the Big West and the NCAA,” CSUN women’s volleyball head coach Jeff Stork said. “The addition of CSU Bakersfield and Sacramento State is a testament to the strength of the Big West Conference and sand volleyball in general.”

The Big West inaugural sand volleyball season will debut in the Spring of 2016, with a six-team, double-elimination conference tournament. The location, date and time is not announced yet.

Initially, there will be no regular season round-robin conference competition.