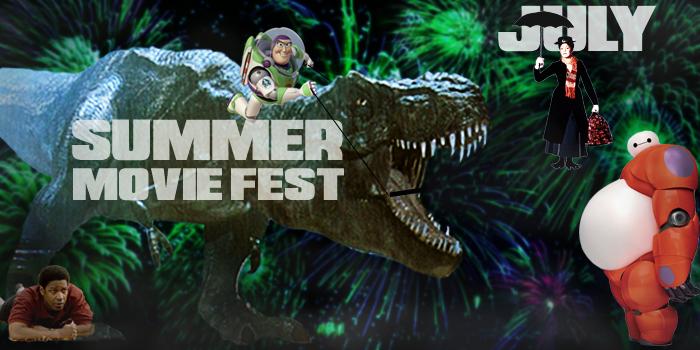 CSUN’s Associated Students are raising the bar with a bigger movie decor per film theme and continuing to raise money and goods for charity with the San Fernando Rescue Mission.

A.S. is expecting a bigger turn out in July’s portion of the Summer Movie Fest, with five films. This upcoming month’s movies will kick off with “Remember the Titans,” followed by “Jurassic Park,” and the Disney line-up: “Big Hero 6,” a spoonful of sugar’s “Mary Poppins” and an ending with the classic Pixar film “Toy Story.”

“We have people that started coming to the movies just for the food trucks,” said founder of the summer movie fest and A.S. Manager of Student Leadership and Production Leanne Vincent. “Now they stay for the movie.”

Vincent said the Disney line-up and more kid-friendly films were pushed back to July since kids just got out of school.

“We couldn’t get our hands on [“Jurassic Park”] until after “Jurassic World” opened,” Vincent said. “Same thing with “Big Hero 6,” we knew that we were going to have an audience with lots of kids and we wanted to wait until school was out.”

Compared to other movie fest’s in the past A.S. is trying to go bigger with a more elaborate decor for each film’s theme.

A.S. is also trying to raise a bigger audience and expand with live bands and performances more towards the end of the summer, A.S. Producer Austin Hidalgo said.

“We try to have these big decor and big giveaway movies be surprises,” Vincent said. “We don’t want people to expect that every week we’re gonna give away Disney tickets.”

On the topic of the charity, CSUN alumnus, writer and comedian Joe Dungan read about the charity online, and wanted to donate extra copies of his book “L.A. Nuts.”

Dungan hasn’t attended a movie fest showing, but is planning on giving to the rescue mission.

This week will be the grand opening of the new facility for the shelter and they are expecting a big turn out for services, Vincent said.

“We raise the clothes, the money and proceeds that go towards [the shelter],” Hidalgo said. “We also partner with another community service organization that’s out during the event.”

According to Vincent, the San Fernando Valley Rescue is looking for basic food staples like canned foods, peanut butter and jelly, pasta sauces, pasta, and undergarments for men, women and children.

“For a lot of people that are living homeless, they either have to wear old used clothing or wait too long and they can’t get it cleaned,” Vincent said.

When she goes out shopping she’ll sometimes throw in extra cans of food or a package of underwear or socks.

The July movie fest kicks off on July 2 at 6:30 p.m. on the Oviatt Lawn with food trucks, a raffle and the charity.