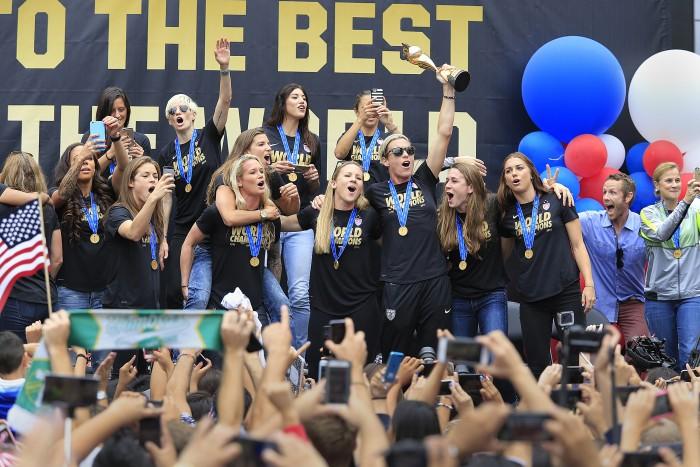 The dominant, historic run by the U.S. Women’s National Soccer team embodied herculean grit, it was the most watched soccer game in U.S. history in their 5-2 victory over Japan in the FIFA Women’s World Cup Final.

Their story had everything viewers would find in a Hollywood screenplay–with drama, adversity, emerging heros, a steadfast antagonist, and most importantly, retribution and redemption.

Morgan came in with a knee injury that wasn’t an issue, but ended up limiting her minutes early for precautionary reasons. Sydney Leroux was pegged as her replacement. Leroux, a duel-citizen from Canada, was highly accomplished but her performance on the biggest of stages was yet to be determined, especially with Morgan’s knee injury forcing her to miss several preliminary matches. Solo, the most polarizing figure on the team due to past actions, because of the assault of her sister-in-law and her nephew was a serious concern off the field and how or if she would let it affect her on the field. Wambach made it pubilc on numerous occasions that this is her last World Cup go-round.

Rampone was the only remember remaining from the 1999 championship team. Wambach is the all-time international goals leader and there’s a lot of uncertainty going into Group D, aka, the infamous “Group of Death.”

Now that the dust is settled and the avenging of a World Cup loss to Japan four years ago on penalty kicks has been replaced with under-the-radar midfielders, record-breaking three goals, in the third, fifth and 16th minutes of play, making it the earliest hat trick in Women’s World Cup history.

What we all got to experience, was the swan songs of Rampone and Wambach, potentially the Michael Jordan of women’s soccer. What we get to celebrate is the record-breaking third FIFA World Cup title by the U.S. Women’s team.

The team that not only carried the banner for women’s soccer but time and time again besmirched the mundane thinking and actions of corrupt FIFA President Sepp Blatter, who once suggested that women’s shorts be made tighter to boost the popularity of the sport. Blatter also made the women play of artificial turf, something the men never do or have had to do. For all their suffering, sacrifice, and perseverance, they will be justly rewarded with a one of New York City’s highest honors, the ticker-tape parade through the “Canyon of Heroes” in lower Manhattan.

What comes next for U.S. women’s soccer? Just based off the universal support that the team has gotten and the truth of how they are being compensated has been revealed, the impact of this win will be looked at a watershed moment and a ceiling-breaking moment for women’s soccer worldwide. The success of the U.S. team has and will continue to elevate how other countries view and support women’s soccer.

In various countries across the world, the cultural view of women playing soccer, let alone sports is demonized and purposely propagandized against. Financially, change will continue to happen because the 2014 German men’s soccer team made $35 million in prize money from FIFA compared to the $2 million that the women’s team will get.

With the women’s team just accomplished, they will go down in history as true trailblazers.