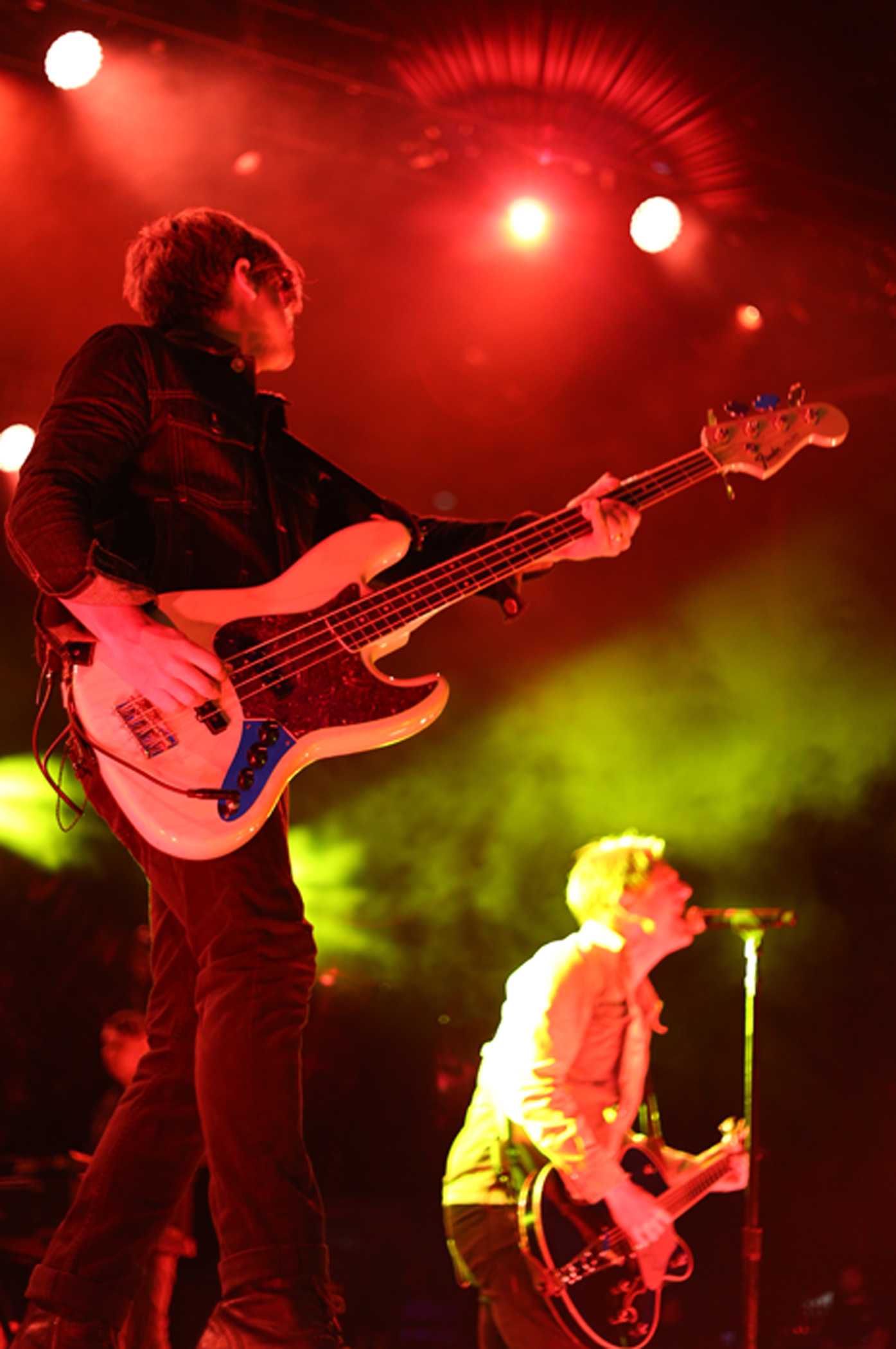 Tim Foreman, Switchfoot Bassist, standing on his amplifier at the Greek Theatre, Sunday, July 12, 2015. Both Foreman brothers used as much of the stage and equipment as possible during the performance. Photo credit: Max Zeronian

A cascade of music rushed over the Greek Theatre Sunday night, featuring Switchfoot and NEEDTOBREATHE. Both Christian rock bands played for a crowd of eager fans, with an atmosphere that could be felt throughout Griffith Park. Switchfoot, a San Diego based band, played for a hometown crowd that had traveled up just for the concert.

Colony House began the night, playing only five songs before handing the stage over to Holcomb’s band. With a crowd still filtering in, the band was able to engage an audience that was mostly unfamiliar with their work.

Drew Holcomb and the Neighbors took the stage after a brief intermission to reconfigure the stage.

The Neighbors slowed the pace of the show and brought the crowd back to a calmer mood, which contrasted harshly with the bands before and after. Lead singer and guitarist Drew Holcomb explained the meaning of each song.

The song “What Would I Do Without You,” which he wrote for former band member Ellie Holcomb, then Ellie Bannister, earned a standing ovation from the crowd.

Following another brief intermission came Christian rock band Switchfoot, who went mainstream in 2003 with the double-platinum album The Beautiful Letdown, according to Billboard. The band originated in San Diego, California, which lead singer Jon Foreman made reference to throughout the show, earning an applause every time. 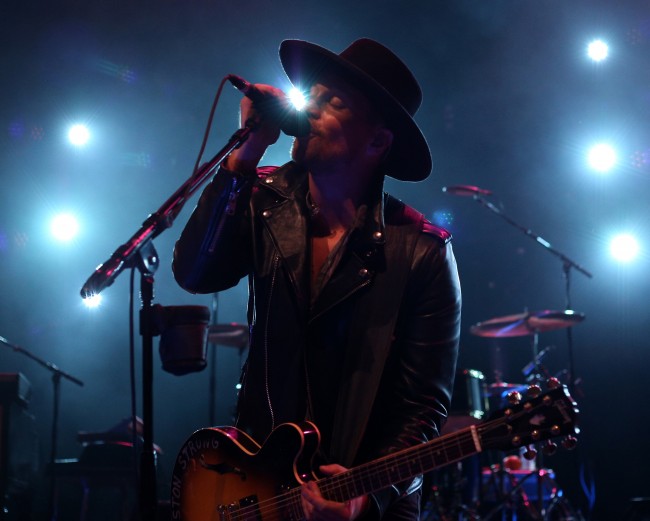 Foreman led the band in playing three new releases before going back to their early days with “Meant to Live” and “Dare You to Move,” both from their 2003 album.

Younger brother Tim Foreman was just as energetic on bass and backup vocals. The two brothers could be seen jumping off amplifiers, platforms, and even Chad Butler’s bass drum set.

While many of the new songs sounded much like those on the albums, songs from the band’s first six albums were noticeably more raw, with a different emotion coming through the instruments and vocals. As Jon Foreman told the audience, the split from their record label allowed them the freedom to be creative and form a new sound, which was clearly applied to every song they played. 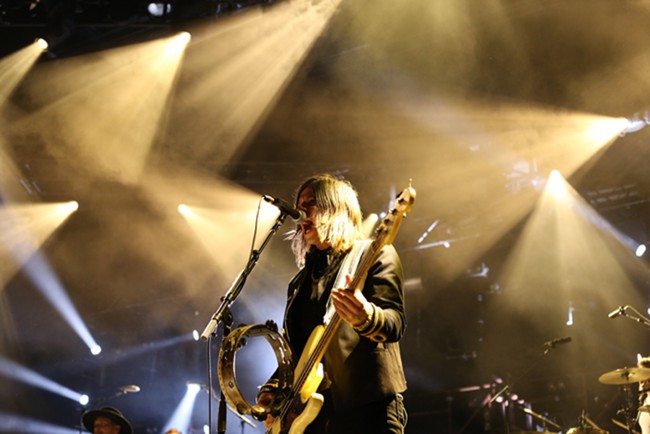 After playing “Hello Hurricane” with the whole band around one mike, Jon Foreman made his way through the crowd, singing “Love Alone is Worth the Fight.” He then returned to the stage to close with “Dare You to Move,” “The Sound” and “Where I Belong.” 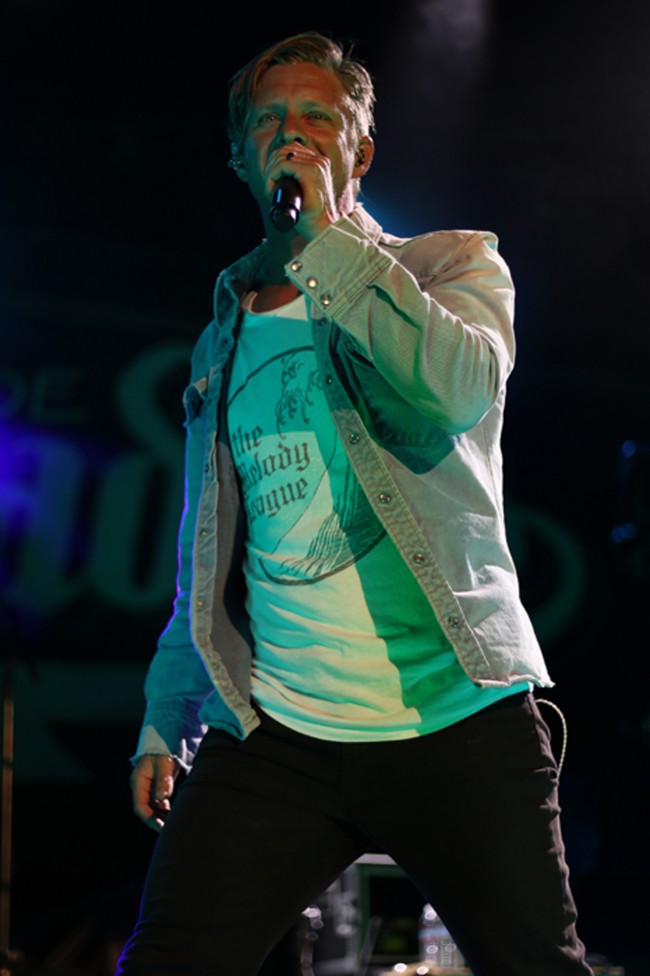 The crowd was on its feet begging for more, but the schedule wouldn’t allow for an encore performance. The band once again thanked its loyal fans, and exited gracefully.

The band that most had come to see finally stepped out on stage at 9:45 p.m.. The fans would stand for the remainder of the show. Opening strong and never slowing the pace, NEEDTOBREATHE gave the crowd the show they had waited over two hours for.

On stage were two percussionists, two guitarists, one organist, and one bassist. Lead singer Bear Rinehart went straight into three of the bands top hits.

Halfway through the set, Rinehart came out into the seats and performed an intimate version of “Difference Maker.” Unlike Foreman’s trip into the stands, Rinehart remained strangely distant from the audience, given the nature of the song.

After returning to the stage, the band gave a brief history of their journey and gave the audience several more songs before exiting, only to play two brief encores before ending at eleven o’clock.

As the last song wound down, the crowd roared in applause. The Greek Theatre, one of the band’s favorite venues, could be heard throughout Griffith Park, cheering for a show well done.