On the drawing board of being an animation student: Adriana Lee Park 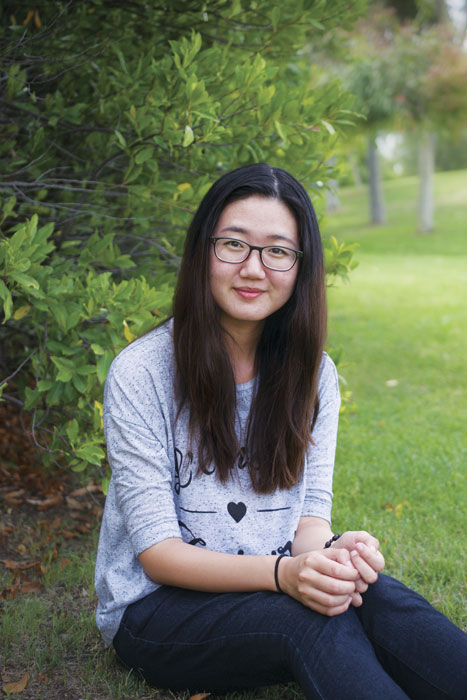 Animated films such as “UP” and “Finding Nemo” have touched millions of children and adults all over the world with the portrayal of emotions and heartfelt story lines.

For Korean-Paraguayan animation student, Adriana Lee Park, 25, growing up in Paraguay and watching Walt Disney films “The Lion King” and “Mulan” sparked her interest in animation.

For Park, the films left the impression of being more than just a two-hour cartoon.

At eight years old, she had grown accustom to drawing the characters of films, paying close attention to their emotion, impressive movements and expressions in each scene.

“I really liked [animation] and wanted to be a part of the industry,” Park said.

Her passion and love of animation motivated her to immigrate to Southern California, with the hopes of receiving a better education in the arts, something she said Paraguay could not offer.

She moved to L.A. in 2012, two years before her brother moved here on his own, and attended CSUN to study animation.

“I think CSUN is a great place that gives you all the resources necessary for a student to succeed,” Park said.

Park is now enrolled in one of the top animation schools in the country.

CSUN was ranked No. 15 in the nation by Animation Career Review, an online website for aspiring animation professionals seeking information on schools and careers.

“She is a very dedicated and talented student,” wrote Professor Mark Fahrquar in an email.

Park gains her work experience at the CSUN Career Center as an animator and has an internship at Wonder Grove, a website that helps teach kids through animation.

“Because I’m interested in animation I look at more of the movement [in animated films],” Park said.

A few of her favorite films are “WALL-E” and “How to Train Your Dragon.” She also enjoys the animation companies DreamWorks and Disney.

“The story is important to understand the acting of the characters,” Park said.

And the story’s significance can be seen in Pixar’s recent film “UP,” particularly an eight minute scene of that goes well with the musical score.

Park said the editing made the audience feel emotions without words and showed good animation that made people cry.

“I think most animators are really focused on the line of the character’s death, but it’s how you act – the emotion from the eyes and body language,” Park said. “‘UP’ was a perfect example of how good animation can be.”

Park strives to inspire audiences with animation just like Disney and DreamWorks.

“I am sure that many animation students choose CSUN because it is not as expensive as other art schools,” Park said. “[CSUN] has talented professors that are there to help each student.”

Before majoring in animation, Park’s wishes she had drawn more people, animals and objects that were moving.

Park said for students that want to study animation, it will be hard at first to learn the mechanics of animation. Once they get through the basics it becomes fun, she said.

“[CSUN] has many courses that help students improve and learn animation,” she said. “I think that if I dedicate my time on learning at school, I will graduate with a decent portfolio to get a job.”