Robbie Lynn, On the Verge to Success 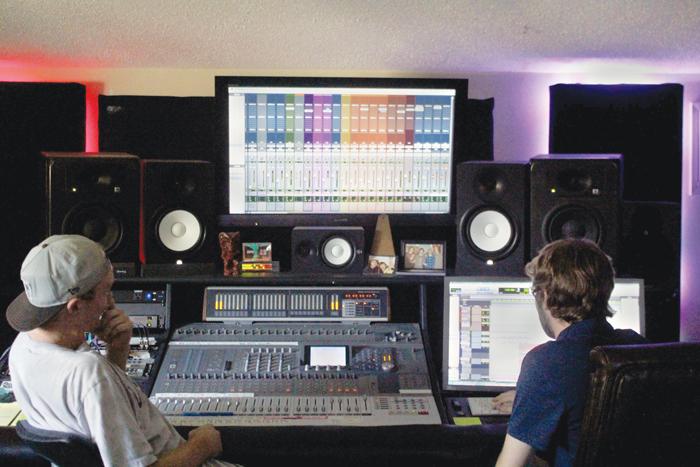 Riley Unverferth (left) and Robert Lynn (right) take advantage of their studio session near the CSUN campus in Northridge, Calif. on Monday, Aug. 17, 2015. Lynn is 23-year-old senior pursuing his passion while finishing up the CTVA program. Photo credit: Yocasta Arias

As he leaned back into his chair, nestled within his carefully crafted homemade recording studio, 23-year-old CSUN student Robert Lynn meticulously tries to mix a song he’s working on for the band he’s recording for the day. He sees everything from start to finish. He molds the sound and he’ll add the type of drums he wants and even the musicians he wants.

For Lynn, becoming famous and known isn’t his main priority, but rather to pursue what he has always loved: the sound of music.

At such a young age he developed an ear for music, paying close attention to every beat and sound.

Lynn was born in the Los Angeles County but grew up in Sacramento. The current CSUN student transferred from a junior college in Sacramento, and turned to L.A. motivated enough to join the Cinema of Television and Arts program with the hopes of achieving a better education and hands on experience.

“I love everything about music,” Lynn said. “It’s one of those things I don’t really have a reason for. It all happened naturally.”

With such a musically inclined family, Lynn had the privilege to grow up to different kinds of music around the house all the time. He had mixers to play with and different instruments laying around his house.

“‘I started playing instruments when I was in the second grade,” Lynn said. “I played with different bands then I went on to learn the saxophone, then drums and then the keyboard.”

Lynn’s passion for music and film has opened amazing doors and opportunities. He’s met amazing people who share the same interests as him and have even collaborated with him. Yet one of his biggest accomplishments is building his own studio at home.

“My dad helped me get started with some gear he had around the house,” Lynn said. “After that I basically just worked really hard to afford the rest. I worked at a production company all through high school. So I used money made from that and recording to help pay for it. It’s one of those things I sort of built over time and I’m always improving.”

Lynn’s studio is situated in his the control room, where the sound and vocals from the studio is recorded and manipulated. The room is filled with computers where professional audio mixing take place using specialized software. A second bigger room, where noisier equipment is played, is usually called the “isolation booths.” In there you can see instruments such as the drum set and electrical guitars to keep these type of louder sounds from being audible to the microphones in the other room that are capturing the sound from other acoustic instruments. There is a multitrack recorder, microphones, monitors connected almost everywhere and a keyboard. It is all carefully designed catering to Lynn’s specific needs, all wired together so that you can have people playing the same song at the same time just in different rooms.

“The best thing about music production is going in with an idea and coming out with something and way better than you expected,” said Lynn. “There has been occasions where we create something by accident while rehearsing and we end up putting it into the song.”

For the music industry itself, Lynn said there’s always been a doom and bloom in the music business. The music industry has changed over the years and has crumbled becoming so competitive. Now only a small percentage of these artists actually make a decent living for themselves and their families.

And just like any other student, Lynn is already thinking ahead of himself and his future goals. That is why he decided to become a Cinema of Television and Arts student.

Lynn’s roommate, 24-year-old CTVA student Michael Bostedt, has lived with the producer for nearly two years and his experience has been nothing but entertaining.

“He’s an exciting guy to live with,” said Bostedt who is also from Lynn’s native Sacramento. “He’s always got bands and artists coming in and out of the house, which is nice. It’s more interesting than a normal college house.”

“I’m able to watch him go through a lot of his projects, help him on his stuff, learn from what he does and I can make adjustments on my projects,” said Bostedt. “He’s always more than willing to help out on my stuff and several of his bands have been in my shows and he let’s me have access to a lot of his equipment, and that’s really nice.”

Lynn soon came to realize his talents in music production, which could also be incorporated into his love for film. Lynn looks to blend his knowledge of music mixing and the art of film, hoping to one day be his own boss at his own company.

“I want to own my own company that produces music for film and audio post production, where you can build audible tracks to television shows,” Lynn said. “But for now, I’m just always looking for new bands and artists to work with, so feel free to reach out.”

Lynn has used his drive and passion for music to help forge his detailed approach to audio production in film. Within Lynn’s producing aspirations, the underlying theme of “producer looking for a quick strike at riches” is nonexistent. Lynn’s outlook on producing quality audio for films and his hands on approach over his material has indeed trickled down from his experience and passion from music production. For now, Lynn looks to work with as many musicians as he can, doing what he loves the most: being surrounded with music.