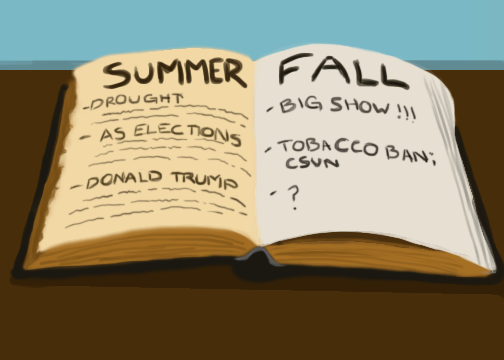 That feeling of summer as that free, revitalizing time of the year where the temperature slowly rises and all things are possible has reached its final days, its nauseous end.

We left off last semester by witnessing a crushing defeat where nearly 5,000 students voted between the two student-run parties in Associated Students that either did or did not include sustainability as a part of their platforms.

It seemed to be the end of A.S.’s attempts to curb the drought. I imagine, however, that it is not over. Our school can only do as much as our community is willing to put forth.

However, the new impaction policy will also take hold. This has been an issue that students have taken great umbrage with, particularly with the classrooms not having enough seats for all those who want to enroll.

Will there be more rallies and protests against impaction? Probably. Will they change the decisions of the officials who enacted it? Who knows, but any benefits will likely be less positive to potential new students.

I’ll be checking back on these issues over the next few months.

Now we leave the campus to the other agonizing factors we have struggled with this summer. Starting with the 2016 Presidential Election, I have not seen so much coverage that has made critics and observers feel so violently ill. I figured the Donald Trump campaign would be as short as it was back in 2012.

The country has seen the election become a talent show where everyone can perform the same talent. You can check all of my live tweets on the debate(s), but I can assure the ugliness of this election has only just begun.

In short, this election has the effect of being “kicked in the head with an iron boot,” to quote Captain Rex Kramer from the 1980 comedy “Airplane!”

Looking back on the election, though, plenty of students (not just from CSUN) have shared their admiration for Democratic presidential candidate Bernie Sanders. His status as a socialist is quite irrelevant; Sanders has made his stances against college tuition and student debt, and this has gained student attention.

After witnessing his Los Angeles Rally, it is enlightening to see so many young Americans look to him as a proper, honest leader. Although this is not intended to be an endorsement for him, I do wonder how many college-age voters will vote for Sanders when the Democratic primaries arrive.

Oh well. This positively transfers over to the collegiate prospects. A new semester, in the fall, brings a clean slate, the repetitive thought of “things only getting better” (to paraphrase D:Ream’s song) is at our door front. I have welcomed incoming CSUN students with the written word before, but I do it again less as a welcoming guide but now more as a cynical optimist.

Problems beyond this campus will happen even if we have no interest or say in it (the election, the drought). This includes issues relating back to us such as student debt and how our student government plans to deal with it.

I have heard a lot of students express this feeling that the school is against them. But look at the tobacco ban. With as many smokers as there are on campus, this new policy has a chance to improve the health of thousands of students and staff. After all, let’s try it!

Another aspect of this year that will please some CSUN students is the allowance of fraternities and sororities to recruit new members. Though some have teetered down to low numbers with the lack of new members, many look forward to the joys of rush week.

Considering the tragedies from last year, there are members who hope no problems will come about this semester, but this is no guarantee that they will have a perfect semester. On this issue, everybody can only standby on the potential issues to arise.

And lastly, students have expressed their appreciation for “newer” and “better” presenters for Big Show, with Tyga and Carnage. I’ll give you my feelings on that when it comes, because it is questionable as to whether we really need to have this or if we should be spending large amounts of money for an event.

Although I feel my negative thoughts outweigh the positives, only time will tell how the rest of the semester plays out. Let’s sit back, and observe.