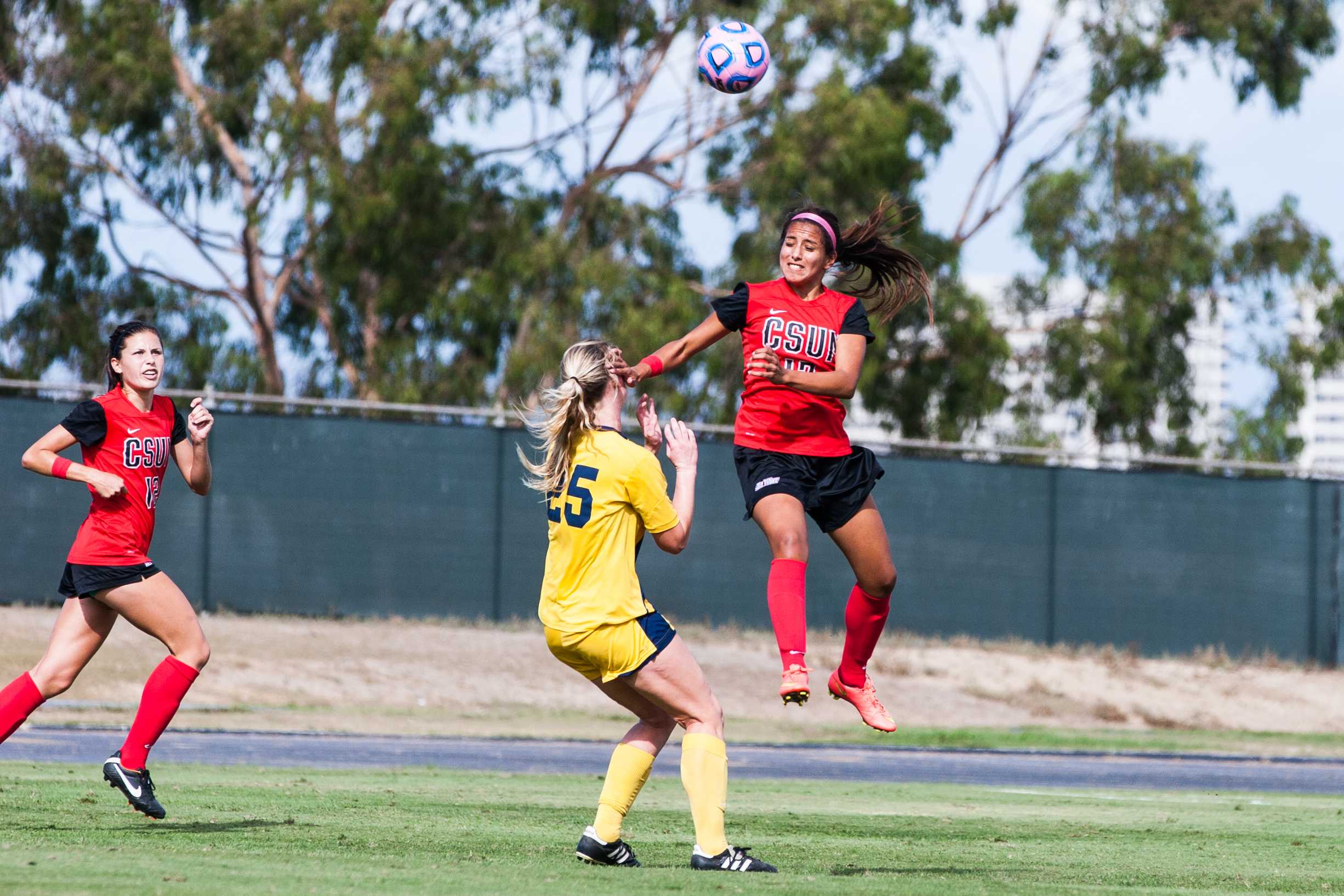 The Matadors' offense was a well-oiled machine in their rout of Portland State Photo credit: File Photo/The Sundial

Following a heartbreaking defeat in the season opener against Pepperdine, the CSUN women’s soccer team (1-1) rebounded in their home opener, defeating the Portland State Vikings (0-2) 3-0.

For the better part of the first half, the Matadors resembled the team that started their first two games with a total of zero goals, despite getting off eight shots in the first 37 minutes.

However, things changed when sophomore midfielder Destinney Duron was able to locate and track junior forward Sylvia Trinh’s corner kick in the 38th minute, drilling a header into the back of the net for the Matadors’ first goal of the season, and giving them a 1-0 lead.

The goal capped off a half in which the Matadors got off 10 shots, which was already more than they had over the course of their first game (nine).

Moreover, it seemed to lift the lid off of the goal for the Matadors as they kept things rolling right out of the gate in the second half.

A little more than two minutes after the second half had begun, a foul by Portland State’s freshman defender Dallin Esmond set up a free kick—and an opportunity to double the lead—for the Matadors.

And with the ball positioned about 25 yards away from goal, junior midfielder Kourtney Kutscher was able to get it past the Vikings’ redshirt junior goalkeeper, Angela Haluska.

Not content with a two-goal lead, the Matadors nearly tacked on another one after Portland State committed a foul in the 48th minute. Nevertheless, junior midfielder Krystal Kutscher’s shot was blocked by Haluska.

That blocked shot proved to be nothing more than an aberration, as the Matadors would get a third goal in the 59th minute, courtesy of sophomore forward Cynthia Sanchez.

After Sanchez’s goal, the Matadors were firmly in control, which yielded a more conservative approach to game by the Matadors. This is demonstrated by the mere five shots taken by CSUN in the final 31 minutes, as opposed to the 13 shots taken in the first 59.

The strategy payed off though, as the Matadors staunch defense allotted the Vikings only 11 shots throughout the game.

After struggling to muster up any offense in an offseason exhibition game and their season opener on the road, the Matadors were able to see the net widen after nine of their 18 shots were on goal.

CSUN will now look to carry over their offensive rhythm, and defensive stinginess (they have allowed zero goals in regulation this season), into their next home matchup against the Southern Utah Thunderbirds at 7 p.m. on Thursday.