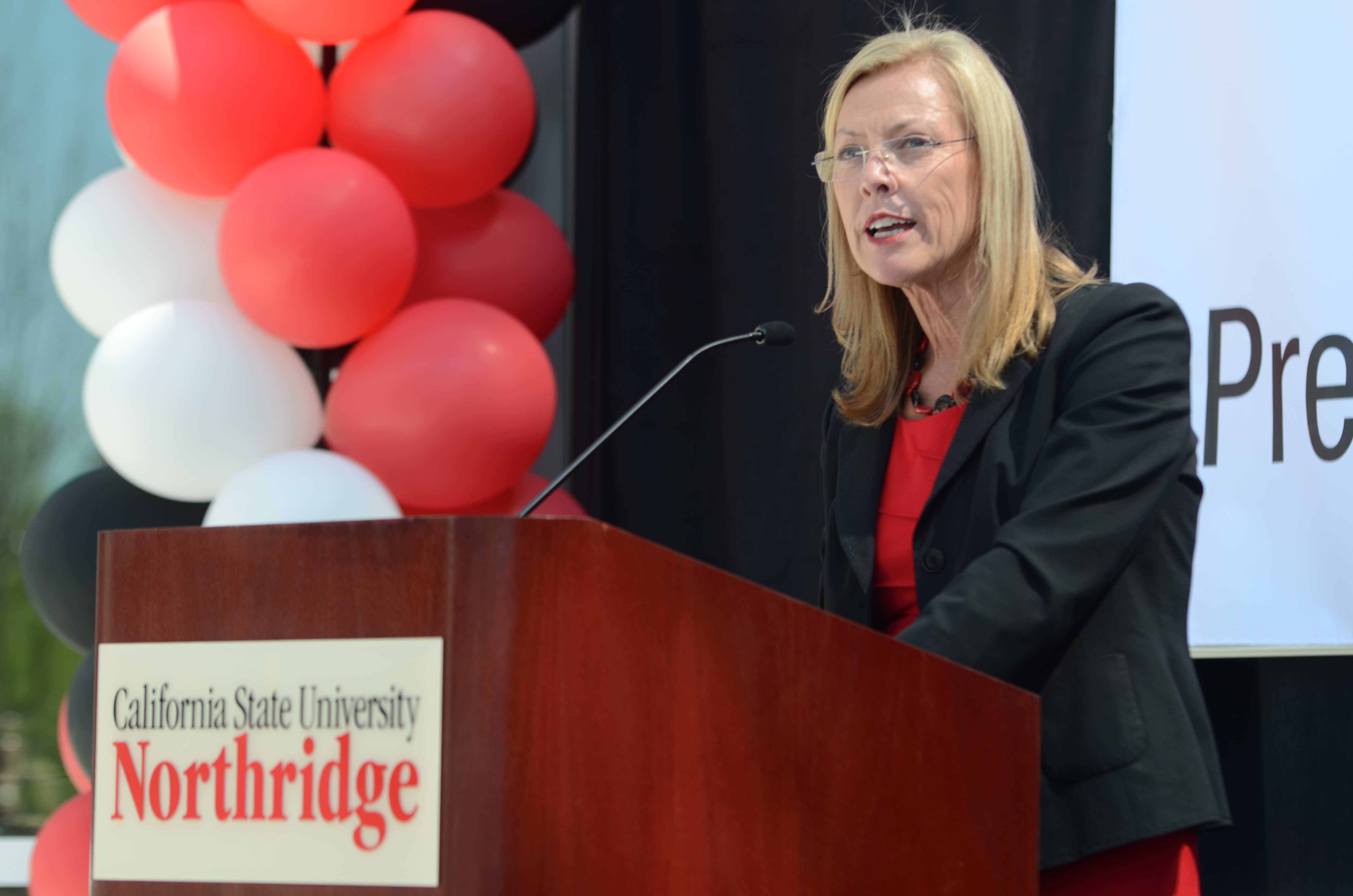 Enrollment, social justice, sustainability and CSUN’s status as a smoke-and tobacco-free campus were just some of the topics raised by university President Dianne F. Harrison as she gave her fall welcome address to a packed Valley Performing Arts Center on Thursday morning.

Harrison’s address to more than 800 faculty, staff and guests marked the fourth fall welcome address for the university president since taking office in 2012.

In her speech, Harrison called the university a “destination campus, committed to success” where a record number of students are now enrolled.

“CSUN should expect to receive over 42,000 students this semester,” Harrison said.

But lack of state funding has forced CSUN to place a one-percent cap on the number of first-time freshman and transfer students. This equates to approximately 300 less students each year for the next four years.

In the meantime, the president said, CSUN will welcome roughly 5,665 first time freshmen and 5,797 first-time transfer students, according to preliminary numbers released by the campus’ Office of Institutional Research.

Harrison’s biggest concern, however, is making sure students get into the classes they need.

Her concern stems from actions by university leaders in the past who cut the number of available classes to decrease enrollment in order to deal with state budget cuts.

“That gave us a black eye,” Harrison told the Sundial after her welcome address. “People thought you ‘couldn’t get your classes at Northridge,’ so I am trying to get us over that reputation.”

Harrison said she is committed to providing campus departments the resources they need in order to provide students with the classes they need.

The president also spoke briefly on the issue of social justice. She touched on recent events, such as the church shootings in Charleston, South Carolina, and the 2014 shooting of Michael Brown, an unarmed black man killed by police after a confrontation in Ferguson, Missouri.

In her remarks, Harrison encouraged faculty and staff to set an example for students and promote inclusivity and understanding among the campus community.

“We have an obligation to provide a welcoming environment that allows people to share their perspectives and teaches [students] to listen and hear others as well,” she said.

Harrison also took time to praise CSUN’s Sustainability Department for its efforts in water conservation. CSUN, the president said, will achieve a 17 percent reduction in water use for the 2015-2016 school year.

The president felt optimistic that CSUN would meet the CSU’s directive, which calls for all of its 23 campuses to reduce water use by 20 percent by 2020.

As CSUN becomes a smoke- and tobacco-free campus this semester, Harrison encouraged her faculty and staff smokers to take advantage of programs to help them kick the habit, including the Student Health Center.

In fact, the new policy has inspired one staff member — Physical Plant Management painter Darryl Hart — to quit smoking. He pumped his fists in victory as Harrison acknowledged him.

“The health and well-being of everyone on campus is important to the university and me,” the president said.

Among other topics President Harrison addressed:

The CSU System’s Graduation Initiative 2025 expects CSUN meet a variety of new goals, including: increasing the graduation rate for first-time freshman to 60 percent; increase the four-year graduation rate to 76 percent.
CSUN has launched initiatives to increase the campus’ visibility and reputation, including: the launch of the CSUN Rise Campaign in spring 2015, which included placing ads at Burbank Airport and Topanga Mall.
The university has received a $100,000 grant from the NCAA that supports a partnership between the campus and the National Urban Alliance for Effective Education to provide first and second-year student athletes with tools to succeed in the classroom.
There are now 86 new tenure-track faculty members, and 66 faculty members were tenured or promoted; 234 permanent full-time staff have joined CSUN in the past year or have taken on new roles.