Men’s Soccer: CSUN gets shutout 4-0 in exhibition game over the weekend 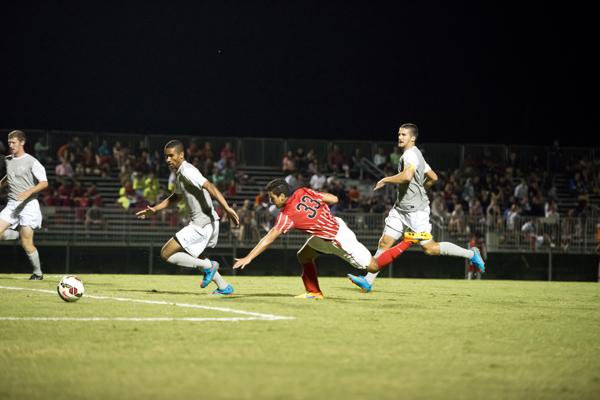 Matadors Andrew Rizeq, middle, looses his footing as he attempted to break past the defenders of the LMU Lions in the Exhibition contest held on Saturday, August 22, 2015 at the Matador Soccer Field in Northridge, Calif. The Matadors suffered a 0-4 loss against the Lions after making several attempts to score a goal. (Photo Credit: David J. Hawkins/Sundial) Photo credit: David Hawkins

In their first action of the 2015 season, the CSUN men’s soccer team lost 4-0 to Loyola Marymount in an exhibition match on Saturday night at Matador Soccer Field.

The lions scored twice in the first and second half when LMU’s Adrien Perez assisted on the first LMU goal and scored his own in the 64th minute of the game. Fellow lion Maurice Morton scored a goal and an earned an assist.

The teams had early chances back and forth until Morton beat the CSUN defense with a chip shot over senior goalkeeper Adam Hobbs in the 13th minute. LMU scored again courtesy of a kick that was initially blocked by Hobbs but the rebound fell to LMU forward Akio Ohtake-Gordo, who trickled a shot to the near post in the 44th minute.

In the second half, Matadors Carlos Gonzalez, Steven Manios and Bradley Mulvey all had near-chances but couldn’t finish from inside the 18-yard box.

CSUN was more intense and assertive in the second half by finishing the game with seven of its eight shots for the contest.

However, LMU scored in the 64th and 70th minutes to win put the game out of reach.

Hobbs played nearly 73 minutes in net and made two saves. Junior goalkeeper Kevin Marquez played the final 17 minutes and also had two saves. LMU finished with 18 shots and two corner kicks in the match. There were a combined 26 fouls and six yellow cards in the match.

This year’s team is working to develop its own identity just like last years team did with Sagi Levi-Ari and Edwin Rivas, who were both drafted in the Major League Soccer Superdraft. This team brought in nine new players over the summer to reload.

The official 2015 season opener is on Sunday, Aug. 30 against Loyola-Chicago at 6 p.m at Matador Soccer Field. The game is part of a CSUN soccer doubleheader with the women’s program, who will play New Mexico State at 1 p.m. on that day.