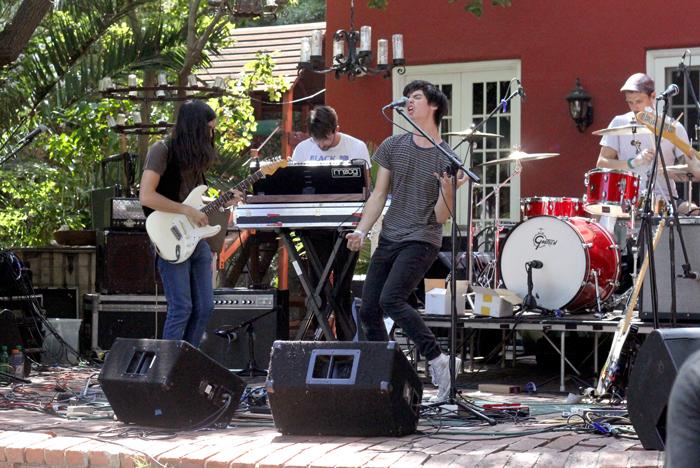 In its fifth year of raising awareness in music education for young people, Musack’s Rock and Roll Carnival served as a fantastic interlude Saturday at the home of the Cary Family.

The Rock and Roll Carnival, organized by the musical education foundation Musack, benefits funding within school and community programs in both Los Angeles and Nantucket Island. Donick Cary, host of the carnival and the co-founder of Musack on Nantucket, has been key in expanding the program to the West Coast. The benefit, held in the Highland Park backyard of the Cary Family, is an expansive and sprawling day of activities for children and adults alike, featuring games, crafts, food trucks and a main stage of music filled with Los Angeles bred talent.

“What’s important about this event is that it shows there are avenues kids in Los Angeles can go down that are creative,” Dave Finkely, one of the event’s organizers, said. “There is a lot of talent here from Los Angeles and that gives people hope.”

Set in the romantically tropical scene of the Cary Family’s backyard, the benefit subdued the formality of typical benefit programs by way of picnicking on blankets and explosive guitarwork. With exhibits including cigar box guitar crafting, Miatra Yoga instructions and DJ sets from Shepard Fairey, the Rock n Roll Carnival proved to be one of LA’s most subversively fun benefit events.

As the main stage entertainment kicked off with Shane Speil and Horace Panter’s Sex Pistols cover set, the crowd trickled in and dug their boot heels into the grass for a shaded seat beneath an umbrella and a tall cold Golden Road IPA. It seemed apparent that the first few arrivals weren’t anticipating such an explosive beginning to the day’s festivities, letting their children run lose as “God Save The Queen” seared through the afternoon humidity.

By the time De Lux took the stage, the activity in the Cary’s backyard had finally begun to pick up. Pizza slices, hot dogs and Frito pies were flying off the concession stands faster than the crowd could consume them. The lunchtime rush was accompanied by the slacker glam stylings of the young Los Angelino quintet. In a set with virtually zero downtime between songs, the ever-sentient bass groove was reminiscent of an LA sound long lost in the early 1980’s.

Still, the band’s youth was transparent. The latter half of the set seemed to devolve into a pretentious Bowie rip-off, replete with garbled non-sequiturs and misplaced energy. Frontman Sean Guerin was more invested in making a statement rather than performing for a cause, coming off as embittered and snarky when in conversation with Donick Cary after the set. 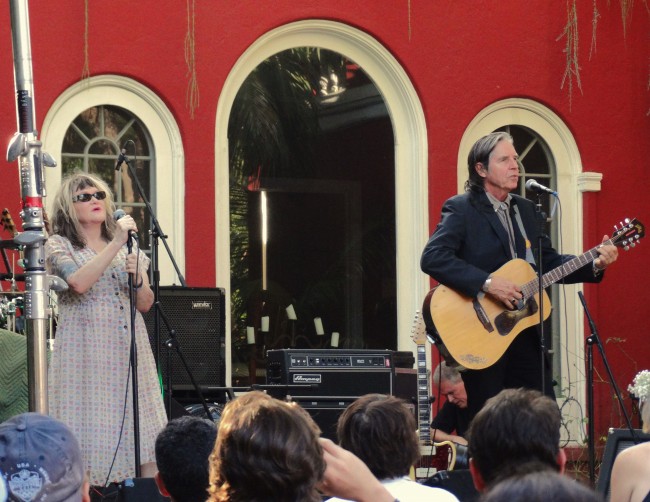 “We started out in the basement and we’ll probably end up in the basement because we’re self deprecating like that,” Guerin mused when asked by Donick where they began playing and where they might see themselves in the future.
Nearly diametric opposites in terms of attitude from De Lux , Sub Pop darlings No Age snarled through the following set. Having cut their teeth on experimental noise guitar and drums duo was a surprisingly mellow interlude for the afternoon. It was hard to determine how many of the middle-aged donors in the crowd were identifying with the act at hand, but the interludes of muff pedals and meandering solos served as a pleasant backdrop for the summer breeze. As avant-garde as the band proved through the course of approximately 30 minutes, the blue note of classic Los Angeles punk crowned at the tendril of every song. No Age’s familiarity served more palpable than a falsely hostile front of “experimental” music.

Between sets were raffle drawings and silent auctions, with prizes ranging from signed instruments to autographed vinyl from Jeff Tweedy and original artwork from Capitol Beatles singles. Rife with material for a collector’s mantle, it was a fun feeling to diverge from the crowds and check out the memorabilia that musicians and artists alike had so graciously donated.

Next to take the stage were The Warning, a band of sisters, all of whom were under the age of 15. In keeping theme with promoting children’s musical literacy, the sisters absolutely nailed their set. Playing original compositions as well as covers of “Crazy Train” and “The Pretender,” the young women drew one of the largest crowds of the entire day. It’s really something to see an 8-year-old bass phenom shred on her own songs, we’ll no doubt be hearing from the girls in a few years.
“Music can be life changing as it has the power of inspiring someone who can relate to a song,” said the sisters of The Warning. “It can create unthinkable feelings. The sooner you start teaching someone a love for music the deeper that love will become part of the person, keeping them away from many negative things in life.”

Certainly, a Los Angeles musical benefit wouldn’t be complete without the inclusion of famed punk pioneers. Enter John Doe and Exene of X, the wonderfully acerbic duo of the 80’s that helped define punk in Southern California. Though Doe is looking a bit long in the tooth these days, he’s still fussing and fighting with the best of them. Armed with an acoustic, clad in a bolo tie, and with his right hand woman at his side, Doe and Exene sang some hauntingly beautiful cuts from their 80’s catalogue along with more recent roots-inspired songs. Exene, (currently battling MS, though you wouldn’t know it) puts on one Hell of a show. The amount of magnetism the two have maintained for nearly 40 years despite divorce, children, and the LA music lifestyle is an astounding testament to the endurance of punk.
“Nothing brings out the applause like a song about redemption,” Doe joked at his dour subject material.

Not to be outdone by way of ferocity in their set, ska-punk legends Fishbone had everyone in the backyard of the Cary’s moving as soon as they hit the stage. Even those who were most reticent to dance were eventually forced to bust a move at one point or another.

Finkel was especially bemused by the band’s presence, giving them a glowing introduction on how they provided the soundtrack to his high school years in the San Fernando Valley. Fishbone heard Finkel’s call for the 818, immediately jumping into an exhilarating round of “Party At Ground Zero” that launched into a non-stop dance party for the remainder of the set. Rounding out the set with their seminal cover of Sublime’s “Date Rape” may have seemed a curious choice at a benefit aimed towards children, though the youngsters were likely too busy enjoying themselves to catch anything from the Bradley Nowell penned tune.

A long intermission due to technical and audio nature suspended the main stage acts for a elongated period of time, allowing parents to usher home their children and grab a gourmet cup of coffee for the road. For those staying, it afforded them the opportunity to grab a donut and sit for a spell with their fellow concertgoers, enjoying the enormously welcomed breeze rolling through the backyard.

Once everything had been squared away, Rancid took the stage in order to perform the album …And Out Come The Wolves in its entirety in order to commemorate the 20th anniversary of the record. Neither looking nor sounding 20 years older, Tim Armstrong and the boys thrashed through the album at a breakneck pace, capturing every nuance live that made the record a staple of 90’s punk two decades ago. The crowd, now entirely huddled around the band, became more enthralled with every forthcoming song as though they had forgotten how many gems the album had within its 19 tracks.

“Rancid was by far my favorite set,” said concertgoer Daniel Grab. “It was crazy to hear songs that were radio hits when I was a kid. It was such a nostalgic experience to hear them again 20 years later.”

It had grown later after Rancid’s set, the crowd dwindling down to less than 50 people or so. Those who remained in the Cary’s yard saw The Bird and The Bee feverishly set up for the last set of the night, making way for the members of The Wrecking Crew.

Inara George and her all-woman band (keyboardist and principal member Greg Kurstin was nowhere to be seen) performed five of the band’s most memorable hits, including their newest single “Will You Dance.” The set was shortened in order to give the Wrecking Crew fellows a substantial set before it became entirely too late.
For the score or so of people left, the reward was hearing some of the finest session musicians popular music has ever offered. Don Randy, Mike Deasy and Joe Osborn have been behind bass, guitar and keys for nearly everyone from Frank Sinatra to The Beach Boys to Marvin Gaye in the 60’s and 70’s, and nothing was quite as rock and roll as they were Saturday night. Enlisting the help of Inara George and friends to sing vocals on the classic “Be My Baby” and “Let’s Get it On,” the Wrecking Crew provided the same service they did half a century ago – the backing track of rock perfection.

The fifth incarnation of Musack’s Rock and Roll Carnival was a terrific success that does good by everyone involved.