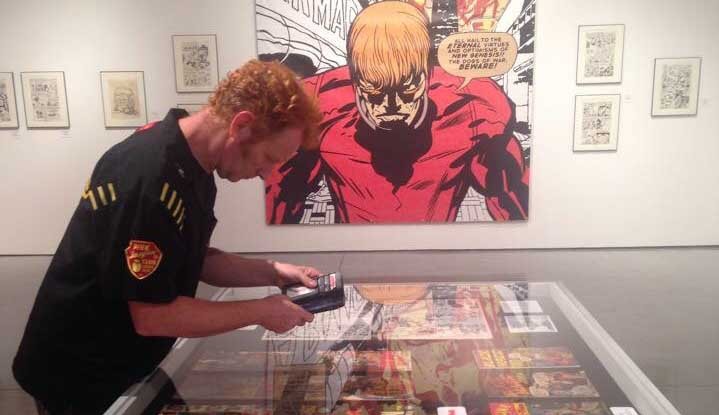 Within only two hours of opening the doors to CSUN’s Art Galleries, over a hundred fans of all ages from all over the city had come to get mesmerized by a legend’s decades’ worth of work. Suffice it to say, the exhibition had started off on a good note.

Comic Book Apocalypse: The Graphic World of Jack Kirby showcases famed comic artist Jack Kirby’s work from the 1960’s and on, with bits and pieces of his earlier work as well. Although portions of his life-long career had to be omitted for this exhibition, the show holds great importance nonetheless, as it may be a historical event.

“This is the largest exhibit ever held in the United States. There has not been to date a show that has been larger than this, and there’s not been a solo exhibition of Kirby at any American University or college,” said curator and English professor Charles Hatfield, whom, along with gallery director Jim Sweeters, has worked for five years on making a comic book show together. Hatfield says the duo was bouncing back ideas before deciding on showcasing Kirby’s work.

“I said you know, all those other themes I thought about, I want to put those aside. I really want to do a Jack Kirby show,” Hatfield said.

As the idea for a Kirby exhibition evolved, Hatfield and Sweeters made it their mission to make the show both educational and fun to look at, which they succeeded in by depicting images that have historical and cultural values, as well as artistic ones. While the layout is full-bodied, it does not overwhelm you.

Original pieces from iconic Marvel comics that so many have grown up with such as Captain America, Thor, and Fantastic Four are some of Kirby’s work positioned on the flashing red, yellow, and white walls. In addition there are also unique works of art such as original sketches for Lord of Light: illustrations for a screen adaptation that never got filmed, but instead was used as part of a CIA operation to rescue U.S. embassy workers in Iran, as depicted in Ben Affleck’s award winning film Argo. Kirby made these illustrations never knowing they went to a governmental infiltration project. Also be on the lookout for the sketch Street Code, this is his most self-biographical work, influenced by the chaos of his childhood neighborhood in the slums of New York.

A buzz of excitement filled the air as fans joyously observed and took pictures of the walls. Fan and historian John Modica, alongside his cousin and fellow comic book fan Jake Modica came all the way down from San Francisco to see this exhibition. One of the things they were thrilled about was the composition and layout of the exhibit.

“This is as close you can get without touching the art”, John said over the fact that the pieces were in full-size and up-close.

Meanwhile, Jake enjoyed the raw versions of some iconic images,

“I like his pencil art the most, his original work before others adding to his stuff. You see how detailed he was, see the emotions and movements,” he said without leaving his gaze from the sketches. His cousin shared his views on Kirby from a historical perspective, among other things explaining how Kirby created the first African American hero, The Black Panther, during the peak of the civil rights movement, and what impact that had during such a delicate time. Hatfield explained this as Kirby’s way of expanding the audience. Growing up on the lower east side of New York, surrounded by different ethnicities and races, he was always intrigued in reaching those different groups through his work as well.

What made Kirby so unique was not only his eccentric and rough style that have come to be known internationally as seen in this show, but also his contribution to the world of arts and entertainment. Hatfield gives Kirby credit for keeping so many people busy, “His work is generative. He made up so much that many people could build their career around his work,” said Hatfield. The main thing about Kirby is that he managed to be mainstream. He designed most of the characters that are in movies now; Avengers, Thor, X-men. He was the first person to draw them. He helped to invent them. He was not just the illustrator – he created the look that went into Marvel movies.”

This exhibit leaves anyone, comic book fan or not, with a sense of nostalgia and familiarity as Kirby’s influences extend even far beyond the world of comics. It is a feast for the eye.

Jack Kirby exhibition will be running from now on to October 10. There will be a gallery talk on Aug. 29 and then a panel discussion on Aug. 31.