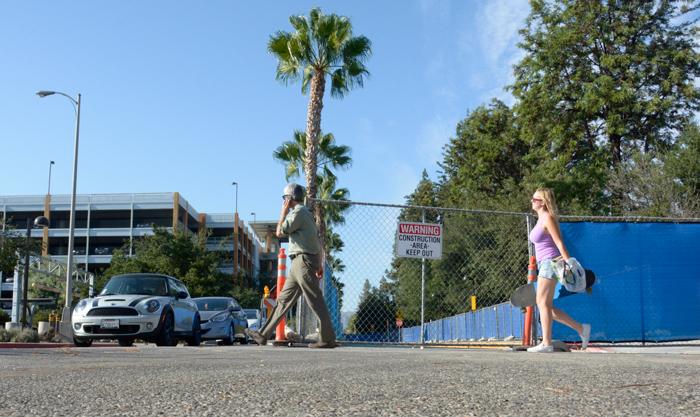 Students, faculty and staff navigate around fences blocking off parts of Etiwanda and its east sidewalk. Pipeline construction will continue for the next six to seven months, according to CSUN Physical Plant Management. Photo credit: Raul Martinez

Blue tarp fencing and sandbags line northbound Etiwanda, blocking off the sidewalk students use to get from the B1 and B2 parking lots to Manzanita or Sierra Hall.

Students with classes in Nordhoff Hall, Manzanita Hall and other nearby buildings are left walking the minimal sidewalk by the construction zone or the sidewalk by the B3 parking structure.

The first phase of the underground construction on CSUN’s pipeline system began a week ago and is set to last the next six to seven months. According to Jason Wang, the senior director of Physical Plant Management, the three-phase project is scheduled to take several years.

The old pipes, which loop throughout the campus, will be changed to newer, more durable ones.

The project will fix and improve the underground pipeline system, which was put in shortly after the ’94 earthquake, said Joe Rhodes, superintendent of Plumbing Piping Construction, Inc., the company hired by CSUN to run the project.

The roughly 20-year-old piping is corroding from the outside in, Rhodes added.

Most buildings on campus use water in their heating and cooling systems. Before winter, the pipes need to be replaced in Chaparral Hall, the Student Recreation Center, and Sequoia Hall.

“The heating hot water is failing throughout the campus, so they’re paying us to fix it,” said Rhodes. “Right now you have leaks popping up all over campus from your resisting system, so after [construction] you’ll no longer have failures on your system.”

The physical construction process has only been taking place for a week, but the planning process had taken about a year, said Dave Ross, CSUN assistant director of engineering services.

Approval for the multi-year construction was delayed because CSUN didn’t get the funding they needed.

“Funding for construction from the Chancellor’s Office has been requested at $7.1 million, but is not yet approved,” said Wang. “We could’ve started in the summer, but we didn’t have enough time to bid the project appropriately.

“We’re getting the construction funding in pieces,” Wang added. “There’s no way you can do it during the breaks; there’s just not enough time to do the entire project.”

The Chancellor’s Office has already funded both the design and construction for phase one of the project for $4.5 million.

According to Wang, phase one of the project will last from July 2015 to January 2016. Construction will circle around the bookstore on Lindley, across Orange Grove walk and up Etiwanda to Sierra Hall.

Phases two and three have been designed but not scheduled as the funding for both projects has yet to be approved, Wang said in an email. The construction dates may change.

“These phases will complete the rest of the Heating Hot Water loop around campus,” Wang said.

However the project may last longer than planned.

“There are two additive, alternate parts of the project that extend the loop north on both Etiwanda and Lindley,” said Wang. “If these are accepted, the project duration will be slightly longer.”

Eventually, the construction will go all the way up Plummer Street, down Lindley Ave and all the way across campus.

“We’re doing the hard stuff first,” said Wang. “We’re doing that South section and the side walk between Manzanita and Nordhoff St.”

For the duration of the construction, students should expect some inconvenience.

“We have to walk around the long way [and] it just makes it harder for us,” said CSUN senior Rafael Munoz. “We have to get out of class earlier in order for us to get to class on time.”