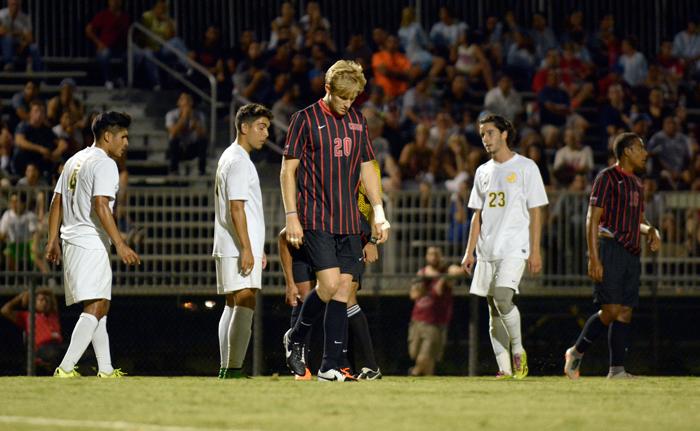 Trevor Morley looks down as the Matadors drop their second exhibition game due to an own goal which determined the final score of the game. (Raul Martinez/ The Sundial)

The Matadors started off sluggish in the first half and it seemed as though they couldn’t keep the ball away from Cal Poly.

However, the Matadors’ senior goalkeeper Adam Hobbs was able to make two saves early on to keep the Matadors in the match.

At the 12-minute mark, CSUN was not able to clear the ball from its own net as Pomona was able to score off a corner kick that was ruled an own goal by Northridge.

“They put the ball in a dangerous area,” said CSUN head coach Terry Davila. “They made us make a play and they earned it; it went off one of our players, but they pushed it in their so you have to tip your hat to them for pushing it in there.”

Afterwards, Cal Poly still dominated time of possession, but a more fired up defense as well as another great save from Hobbs was able to keep CSUN from allowing any more goals for the rest of the half.

Hobbs said the team has to remain competitive and stay focus in the game when something bad happens like a team scoring an own goal.

“You can’t dwell on those types of situations,” Hobbs said of the own goal. “Any goal going in hurts but knowing it was a lucky touch from one of our own is hard.”

Pomona went into halftime with lead well as leading in time of possession and shots on goal.

The Matadors came out kicking at the start of the second half..

Northridge looked like a whole new team and was able to quickly shut down all advancements from Cal Poly while taking shots on goal.

With this new found fire from the offense, the defense stepped up as well and was able to contain Pomona to keep time of possession balanced.

However, CSUN’s efforts to score would be shut down Cal Poly’s goalkeepers who had a total of five saves in the last 30 minutes of the match.

The Matadors were able to tally nine total shots in the second half compared to the two from Pomona.

“We started slow, but when the other team has great defense you just have to keep attacking and they will eventually break,” said junior midfielder Shane Steffes. “We had our chances in the second half but we’re not able to capitalize.”

Steffes said CSUN will be hard to stop once CSUN fixes little things.

In spite of the poor offensive performance, the team feels ready heading into the season.

“The real thing is about to start,” Davila said. “We got to see a lot of players and kept people healthy; I am optimistic we can improve, we just have to put our minds to it.”

The Matadors start their season at home against Loyola-Chicago on Sunday at 6 p.m.