As president, who else will you antagonize? 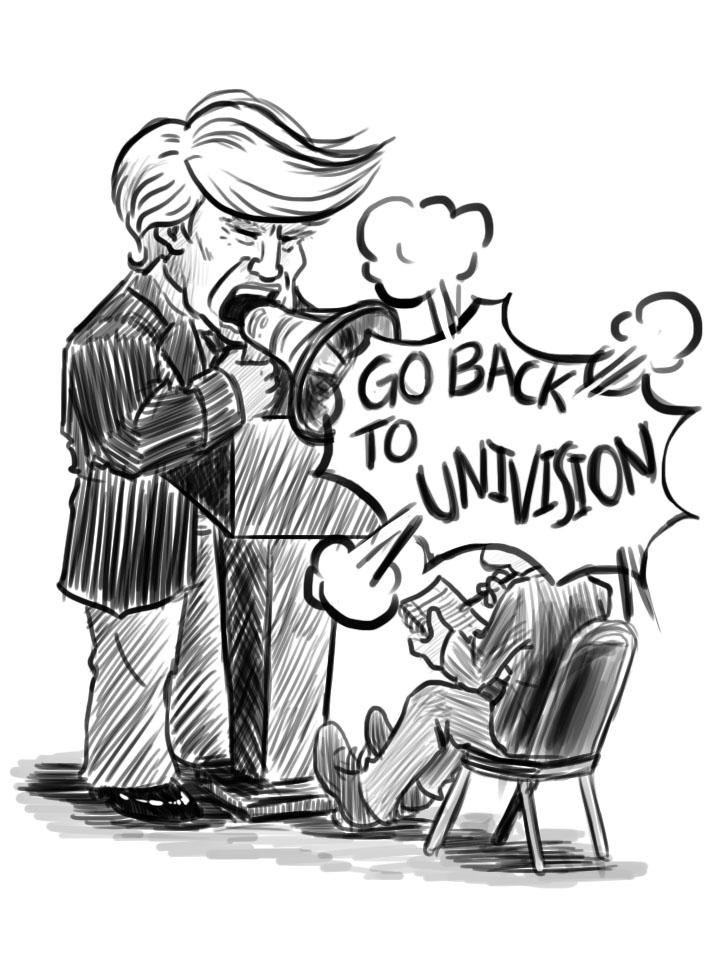 As with any other showdown, this one was just as inevitable. The frustration, the determination persisted as it began.

It was brought to my attention on Wednesday morning that broadcast journalist Jorge Ramos took issue with the immigration policy of Donald Trump, the presidential candidate and magnate who is at the top of the Republican polls.

Before an entire press conference, Ramos stood before the candidate, ignoring Trump’s demands to sit back down. Trump, from his podium, bellowed at Ramos to “Go back to Univision!” This was followed by a gesture to his security guards, who removed Ramos from the conference.

Standing outside the small auditorium, Ramos was told by the same guard to “get out of [his] country.”

Ramos responded by saying he was a citizen. He was eventually let back in, and he specified that Trump’s immigration plan was “full of empty promises.”

The banter between the candidate and Ramos was filled with investigative prodding and political rhetoric, the necessities of the campaign trail. The prelude, however, to this interview has not only brought on but amplified the GOP’s lack of attention to even attempting to gain the Latino vote.

Obviously, there is a viable argument that Trump does not represent the Republican party. Although the level of GOP support for Trump is astonishing, particularly after hearing those words “Go back to Univision!” For a presidential candidate to tell anyone of Latin American descent to go back somewhere are far too racially charged. Anything racially intolerant has no place in a presidential election.

Currently, Trump has a net favorable score among Latinos in America at negative 51, according to a Gallup poll. Americans thought this election would redefine the Republican stance on how to achieve the Latino vote. What happened between Ramos, a respectable and endearing journalist, and Trump’s sick phrasing reeled me and several friends back.

Tiffany Jimenez, a theatre major, expressed her critical views of Trump on Facebook.

“I expressed my anger over Donald Trumps [sic] blatant disrespect of Jorge Ramos,” she said. “As I did, yet another troll account came in telling me my people and I should ‘get the fuck out of this country and leave it to the TRUE Americans’…There was so much hatred posted about my people, and I became enraged.”

“I have a bigger heart than you do,” Trump said to Ramos, followed by his guarantee that the deportations will commence in “a very humane fashion.”

“Humane” and “deportation” in the same sentence? I am sure the last presidential candidate in history to incorporate these words into a sentence may have been Andrew Jackson. He pushed the Indian Removal Act into law, leading to the deaths of millions of American Indian people from dozens of sovereign nations.

While Trump suggests this mass removal will not cost so much that it breaks the bank, it will not gain any substantial traction among the millions of Latino voters who will not vote for another candidate who they feel is way too out-of-step. The Republican National Committee’s leader, Reince Priebus, should have disqualified Trump just after his now infamous initial campaign speech.

Feeling nauseated by a candidate’s rhetoric should be well expected; remember the debate? But with every obscenely charged word Trump said at the debate, press conferences, near the Mexican border or in this case with a Latino journalist, his popularity has the chance to somehow increase. With every new, raw word, he can only find greater “grace” and support with every passing day.

If someone with a podium and a microphone decides to approach an issue in favor of policy that appears to be anti-(insert racial group here), they will have several slim attempts to appear tolerable but still not win more votes from anybody who is not of a white complexion. This is a process in motion, seen during recent elections.

But there’s something else sickening about this: Trump’s vitriol toward Ramos not only reflects the disparity between Republican frontrunners and Latino voters but also GOP presidential candidates and presidents relations with the press. Perhaps it is a reflection of Reagan and Bush 43’s views of the press, but maybe it goes further back in time. Look back on Richard Nixon, who said to his secretary of state, the “honorable” Henry Kissinger.

“Never forget: the press is the enemy. The establishment is the enemy. The professors are the enemy,” Nixon said into his phone receiver, with Kissinger at the other end. Granted, this was the era of memorable journalists Bob Woodward, Carl Bernstein and Hunter S. Thompson, who all helped to reveal the hidden criminal tendencies of Nixon’s presidency. The man, a paranoid.

I have often wondered when I see Trump speak on television or with reporters whether or not he would reenact the Sedition Act of 1798, which set a standard to limit the speech of citizens, journalists and politicians who could heavily criticize the president. While I consider myself a fan of John Adams and his expedient contribution to the founding of this nation, this law and the Alien Act severely hurt his presidency.

So in looking back on that early aspect of our history, the anti-immigrant and anti-press rhetoric of a Republican presidential candidate can not fit, especially in this society. Republican politicians need to either play a new game or deliver a performance that can mostly guarantee less criticism.

The addiction to Trump and his grasp on Republican tendencies will continue to swallow up more and more approval ratings, while still swelling the disapproval net balance.

And after the showdown ended, the candidate left and proceeded to follow what he did after the debate (as described by journalist Mark Leibovich): “Trump, who now had his oxygen, departed the scene and tweeted through the night.”