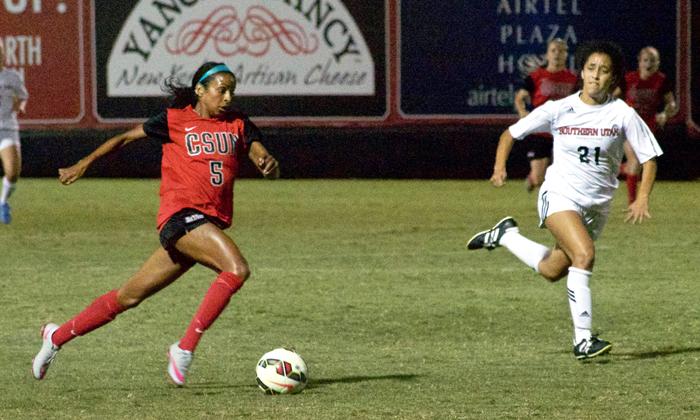 Camille Watson dribbles past the Southern Utah defense in the Matador victory 2-0 at Matador Soccer Field on Friday, Aug. 28. (Michelle Moran/ The Sundial)

The CSUN women’s soccer team earned a win with a strong second half, winning 2-0 against the Southern Utah Thunderbirds Friday night at the Matador Soccer Field.

The victory marks back to back wins for the CSUN women’s soccer team from after defeating Portland State of 3-0 last Sunday.

The Matadors started strong, as they had a series of attempts on goal in the first 15 minutes. However, the shots either resulted in a misses.

On the other hand, CSUN junior goalkeeper Jovani McCaskill also had some remarkable saves during the first half. She had a strong vocal presence towards the defense that was an instrumental key of communication shown on the field to prevent Utah from making a single goal.

As a result, the first half ended with an even score board of 0-0 in where the Matadors had three shots on goal and two corner kicks.

Within 10 minutes into the second half, sophomore forward Cynthia Sanchez scored the 1st goal for CSUN with the assist coming from junior defender Nicole Thompson and sophomore midfielder Destinney Duron

After scoring the first goal, CSUN controlled most of the ball possession for the remainder of the game with series of attempts to score the second goal.

“As a team you have to recognize those gaps and be intelligent and basically look at the defense and break them down,” said Sanchez. “What we saw was that the middle was working and therefore my other forward and midfielders were looking for the through ball which was working throughout the whole game.”

With eight minutes remaining in the game, junior midfielder Kourtney Kutscher put the game out of reach by scoring the second goal of the game with after an assist from junior forward Breanna McCallum.

In addition to a strong offensive second half, the Matadors set the tone defensively but will need to clean up their aggressive play, as there was a big discrepancy in fouls between both teams—CSUN had 17 and Southern Utah had one.

“We had great defense but we were a little cautious,” said CSUN head coach Keith West. “ We went back on our heels but we went for it.”

Scoring in the second half didn’t come as a surprise to the team as they pride themselves in being able to keep the same intensity from beginning to end.

“One of our strengths is our fitness, I think we outlast teams,” said senior defender Kendall Moskal. “We brought more intensity in the second half and I don’t think they were expecting that.”

The Matadors look to carry over that intensity and improve on their record of 2-1 in their next home game against the New Mexico State Aggies at 1 p.m. on Sunday.