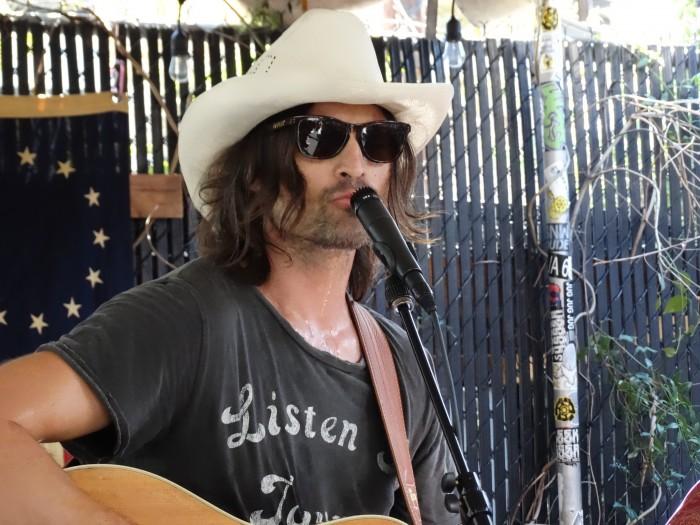 For many, the back porch of The Echo in the neighborhood surrounding Silverlake serves primarily as a place to smoke American Sprits and sober up between sets on the main stage of the venue.

For others, the back porch of the Echo serves as the meeting grounds for the Grand Ole Echo, an ongoing series of Americana and country shows every Sunday of the summer. Between the western style hats, slide guitars, and barbecue paired Pabst Blue Ribbon, the Grand Ole Echo is a little slice of the romantic west in one of LA’s hippest neighborhoods.

Having just wrapped up its last show of the season, the G.O.E. delivered a raucous show to its attendees. Featuring the likes of Ocha La Rocha, The Lonesome Billies and Snakearm, The Echo housed a boot scootin’ good time before Monday rolled around.

“I almost think of it as hosting a weekly party and barbecue with all my friends, who happen to be badass musicians,” said Matt Farber, one of the operations managers of the Grand Ole Echo. “Summertime in Los Angeles is all about the beach and barbecues, so every Sunday we throw a party our equivalent of a backyard barbecue.”

Nearly every attendee on Sunday was clad in western-style hats and dancing boots, rolling up their sleeves in heat to show tattoos depicting Willie Nelson and bald eagles. As the night carried on and beers started to seemingly pour themselves, the crowd erupted into a dance floor on both the back patio and in front of the Echo’s main stage.

Though the music at the Grand Ole Echo takes place both outside and indoors in alternating fashion, the real party remains outside. With Ocha La Rocha taking the helm of back porch entertainment, the crowd was moved into a frenzy, throwing up their hats into the air and letting loose to the alternative country stylings of the band. Much of the credit for the rowdy back porch atmosphere is due to Ben Reddell, sound engineer dynamo and one of the current forces behind making Sundays at The Echo possible.

Inside, the excitement is not abated per se, but it allows some of the patrons to grab a glass of water and check out the merchandise booths set up. Sunday’s show featured a pop up boutique of vintage western wear from Sierra Madre clothing curated by Grant. The air conditioning and friendly conversation inside gives weary concertgoers respite form the heat until they’re ready to brave the weather once again.

Portland, Oregon natives The Lonesome Billies gave a country-fried and electrifried version of country music on the inside stage. Leading the interior crowd with Budweiser can toasts and covers of The Band, the Billies amped up the crowd for the rest of the night.

“It’s been fun playing in Los Angeles – it’s very different from Portland,” said lead vocalist “Ornery” Bill as he addressed the crowd. “I suppose the energy from the crowd is mostly the same, you guys just have so many places to eat tacos here.”

Throughout the day folks shuffled back and forth from the cool oasis of the Echo’s inside to the veritable dance party in the back. Couples were swing dancing, line dancing and altogether grooving during the back porch entertainment though they had very little room to do so in the packed crowd.

“Here in LA, we get a bad rap for being hospitable to country and Americana music because Hollywood and Beverly Hills happen to share the same county as the rest of Los Angeles,” said Grant. “People don’t realize we’ve had a rich and vibrant roots music scene in LA for decades and I don’t think that’s ever gone away.”

The night’s entertainment was capped by Southern industrial duo Snakearm, delivering an unreal Primus-like noise to The Echo. Having played one of the Echo’s inaugural shows, it was more than fitting that they close out yet another season of entertainment. The younger crowd who has lasted the afternoon and braved the heat certainly got a kick out of the band, some even throwing themselves around near the stage during the set.

The Grand Ole Echo presents an interesting dichotomy of sensibilities, with a side representing classic country aesthetics paired with an alternative, genre-bending rebellious side. Despite what may seem like a fundamental conflict of interests, the objective of both sides is shared one. Everyone at The Echo seems ready to kick back and enjoy some music on a Sunday afternoon.

“The Grand Ole Echo has always been and will always be a community for musicians and fans to hang out and enjoy music together,” said Farber.

The night wound down to a small group of individuals celebrating the last time they’ll be able to congregate on the back patio until next summer. Slow dancing to Buck Owens and nursing a drink, laughter abounded as they mused about the day’s events.

“This might be a place where you walk in for the first time and for two seconds feel intimidated because everyone seems to know each other,” said Grant. “But then you’ll quickly realize that it’s not an exclusive scene and extremely communal.”